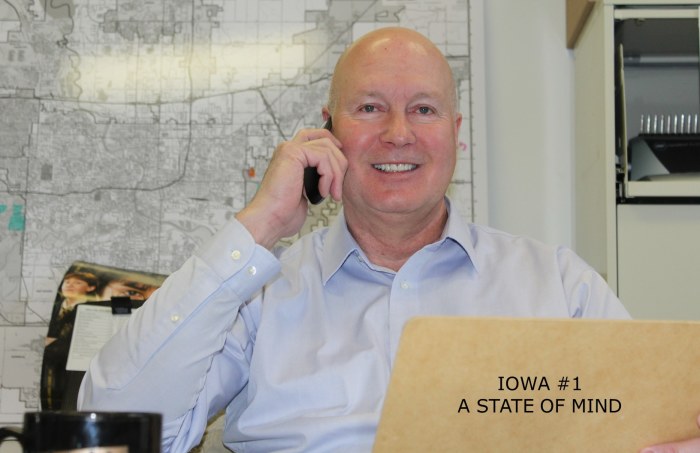 Governor Kim Reynolds megaphoned the U.S. News and World Report ranking of Iowa as number 1 among the 50 states, helping her sputter to victory last November.

Do you think the magazine’s conclusions are based upon valid and reasonable data interpretations? Or are there gaps in the logic or assumptions being made?

In September 2018 the Des Moines Register analyzed factors that determined the ranking. Those arguments were well done.

First and foremost, lists such as U.S. News and World Report’s should be taken tongue in cheek. These are highly subjective, even if wrapped in factual data. Often a magazine’s release of a “best of” contest includes a disclaimer stating the piece was for entertainment purposes. That the study is meant to ignite a fun discussion and to welcome varying views that may come to a different conclusion.

However, the categorized data used for ranking states is controversial. Case in point, the report’s category of “infrastructure.”

Why highlight this category? If not for Iowa obtaining a number one ranking here, our state would never have been declared the best place to live overall.

How was the report skewed in this regard? Generally, infrastructure is defined as basic physical and organizational structures and facilities buildings, conditions of roads and bridges, power supplies, electrical grids, and public services needed for the operation of businesses and quality of society.

It is not logical or justifiable to make internet access account for one-third of the infrastructure ranking.

The report misguidedly suggests that Iowans enjoy the most ultra-fast internet speed among the fifty states. However, having access is inconsistent with usage. Most Iowans have access to HBO, but the number of subscribers is far lower than those eligible to purchase that service. The same situation for high-speed internet.

As an example, as a low-middle income earner, I have access to purchase ultra-fast speed internet through Mediacom at a monthly price of $59.99. My personal household interests are met in purchasing a lower speed. Yes, I have access to higher speed, but is the quality of my life enhanced? No.

As my situation illustrates, it is inconceivable that Iowa, with a comparatively lower median income than Connecticut, has a higher hook up rate to ultra-speed internet. Yet, maybe if coincidences occur, that could be true so let’s put it to the test. Oh, wait, there are no public records on how many people in Iowa are signed up for ultra-fast internet speed. The various ISP companies maintain the secrecy of that data.

Again, not connectiveness, but having access to be connected is the benchmark of the US News and World Report. Glance at the government’s FCC map and immediately you see large sections are less than spectacular in Iowa.

Yet Iowa’s Internet Access rank propelled the state to the number one overall ranking for infrastructure, allowing the state to be named as “best in the country.” By unpacking the methodology, we can see the U.S. News and World Report’s ranking of Iowa was flawed.

Iowans by and large love Iowa. Reynolds locked into this non-controversial feeling, juiced up with a masqueraded research study, and squeaked across the finish line.

P.S.- What about other national rankings?

West Des Moines was the country’s 37th best city to live in, according to a list published by Money magazine last September.

Iowa was number 21 on the Gallup and Sharecare state well-being rankings of 2017, which analyzed five factors related to quality of life (purpose, social, financial, community, and physical).

When Matt Lynch of Thrillist ranked the states on “their contributions to America,” such as “inventions, food/drink, somewhat productive famous people, [and] unique physical beauty” in 2017, Iowa was number 25.

Iowa tied for seventh place on CNBC’s 2018 list of the best places to live.

John Clayton is a farm manager and Poweshiek County Soil and Water commissioner.