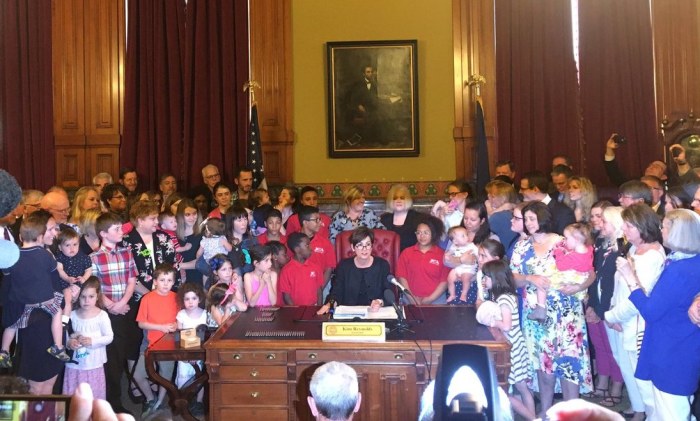 Didn’t see this one coming: Governor Kim Reynolds will not appeal a Polk County District Court ruling that struck down the country’s most restrictive abortion law.

Senate File 359 would have prohibited nearly all abortions after a fetal heartbeat could be detected, which often occurs before a woman realizes she is pregnant. The law never went into effect, because Planned Parenthood of the Heartland, the ACLU of Iowa, and the Emma Goldman Clinic quickly filed a lawsuit.

Proponents of the “heartbeat” bill knew it was unconstitutional but hoped the legislation would become a vehicle for overturning the U.S. Supreme Court’s Roe v Wade decision. So no one was surprised when Polk County District Court Judge Michael Huppert ruled last month that the law violates the state constitutional guarantees of equal protection and due process. His decision cited a June 2018 Iowa Supreme Court ruling, which struck down a much less restrictive 72-hour waiting period.

On the day Reynolds signed the abortion ban last May, she acknowledged, “I understand and anticipate that this will likely be challenged in court, and that courts may even put a hold on the law until it reaches the Supreme Court. However, this is bigger than just a law. This is about life. I am not going to back down from who I am or what I believe in.”

That’s why today’s written statement was so puzzling.

“This was an extremely difficult decision, however it is the right one for the pro-life movement and the state of Iowa. When I signed the Fetal Heartbeat bill last May, we knew that it would be an uphill fight in the courts that might take us all the way to the U.S. Supreme Court.

But everything changed last June, when the Iowa Supreme Court struck down our 72-hour waiting period after concluding that the Iowa Constitution provides a right to an abortion and imposes strict scrutiny on all our abortion laws. I think the Iowa Supreme Court got it wrong. But after this decision and because of Planned Parenthood’s legal maneuverings, I see no path to successfully appeal the district court’s decision or to get this lawsuit before the U.S. Supreme Court.

Rather than be distracted by a losing legal battle, now is the time to renew our focus on changing hearts and minds and to seek other ways to advance the cause of protecting the unborn in Iowa and around the nation. I’m proud to lead the most pro-life state in the country and remain firm in my belief that all human life is precious.”

By “legal maneuverings,” Reynolds means that the plaintiffs grounded their claims solely in Iowa’s constitution, in order to keep the case out of federal courts.

Here’s the odd thing, though: two of the five Iowa Supreme Court justices who concurred in last year’s landmark ruling have since retired. So if the governor had appealed Judge Huppert’s decision, two new justices would hear the case.

For reasons Bleeding Heartland explained here, the Iowa Supreme Court would surely find Senate File 359 unconstitutional anyway. But the two Reynolds appointees might have joined the two dissenters from last year’s case to strike down the law citing the “undue burden” standard used in a 2015 case about telemedicine abortions. An Iowa Supreme Court ruling on those grounds could have opened the door to an appeal in federal court, perhaps eventually reaching the U.S. Supreme Court.

Multiple sources told me last year that Reynolds didn’t want House and Senate Republicans to pass this legislation. I didn’t believe them, partly because the governor staged a huge photo op celebrating the bill signing, and partly because I presumed House Speaker Linda Upmeyer would have stifled any bill her close ally didn’t want on her desk.

For the first time, I am questioning whether Reynolds was ever committed to this extreme policy.

“We’re glad that politicians are recognizing what we have known all along—that the Iowa Constitution has strong protections for women’s rights, including abortion access, and that attempts to seriously erode those rights will be struck down. We’re proud of a Constitution that affirms a women’s fundamental right, in consultation with her doctor and loved ones, to make one of the most difficult, personal decisions she’ll ever make. Government has no place in that.

Moving forward, we’ll continue to fight efforts to amend the Iowa Constitution to ban abortion. Some people want to drag us back to a time when women died out of desperation to control their lives and their bodies. We won’t go back, and we’re glad that politicians have not been successful in implementing what would have been the most extreme ban on abortions in the country, especially considering the fact that a 6-week abortion ban law did not have the support of the majority of Iowans.”

I will update this post as needed with more reaction to the governor’s decision.

UPDATE: Several readers have suggested a solid hypothesis: anti-choice advocates have concluded a different state’s case would provide a better chance of overturning Roe, so Iowa’s appeal was no longer needed. Sounds plausible.

In addition, Reynolds is presumably not worried about angering social conservatives by dropping this appeal, because she supports a state constitutional amendment affirming that abortion rights are not protected. If Republicans keep control of both legislative chambers, that amendment could be on a statewide ballot in 2022, when Reynolds will be up for re-election.

Top image: Governor Kim Reynolds signing the strictest abortion ban in the country on May 4, 2018.