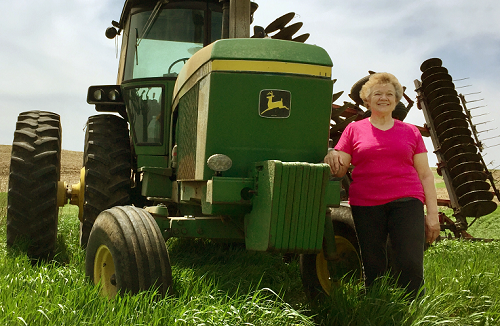 Barb Kalbach: “Congress panders to corporate ag at the expense of family farms, rural communities, and our food supply.” -promoted by Laura Belin

“This is an evolutionary, not revolutionary Farm Bill,” is the refrain from the Congressional crafters of the recently passed legislation. But this out-of-touch bill locks in a factory farm system that for decades has pushed independent family farmers off their land and left rural residents and our environment worse off.

As our democracy in Washington fails us, important fights at the local and state level are taking on corporate agriculture interests and building a new future for family farmers and rural communities.

There is no avoiding it: farmers are in a dire situation. According to a December report to the Farm Credit Administration, USDA forecasts an 8 percent drop in net cash farm income for 2018. Bankers are asking farmers to put up more collateral (equipment, homes) for farm loans. The overproduction of commodity crops to feed livestock on corporate factory farms is driving independent family farm livestock producers out of business.

The 2018 Farm Bill continues the use of public taxpayer dollars to prop up this system, characterized by thousands (often tens of thousands) of animals packed indoors, producing many millions of gallons of liquid manure that is over-applied to farmland and pollutes our water.

The 2018 Farm Bill isn’t working for family farmers and rural communities, but it is working for somebody. While we lose out here in rural America, corporate interests are winning, extracting wealth and moving it into their coffers while farm families are put out of business and pushed off the land. We see businesses on our Main Streets shutter their doors and people move to find opportunity elsewhere. Our kids leave, not because they don’t want to live here, but because opportunity has been taken from us.

The divide between the Beltway bubble and what is happening on the ground in rural America has never been wider. As farmer-member organizations working every day for policies that benefit farm families, rural communities, consumers and our environment, we are taking the fight to corporate factory farms at the local and state level, because we refuse to let our communities be exploited by corporate greed.

In just the last few months, rural leaders in southeast Minnesota successfully stopped a giant hog expansion that would have devastated groundwater in the state’s vulnerable karst region. In South Dakota, a rural county instituted a moratorium on new factory farms after independent farmers and rural residents opposed a proposed 8,000-head hog operation. This proposal was meant to feed an expanding Smithfield slaughterhouse that was recently cited for water pollution violations. In Missouri, rural residents have organized to pass 20 county health ordinances designed to protect their communities against pollution from factory farms.

In Iowa, rural residents are calling for a statewide moratorium on new factory farms until associated water quality issues are addressed. These on-the-ground fights and wins are about more than farmers or rural residents; they are fundamentally about fixing a broken system of democracy emanating from Washington. In writing the 2018 Farm Bill, Congress never got the message that rural people don’t like factory farms and that our public dollars shouldn’t keep propping up the industry. Our nation’s farmers and rural communities deserve “revolutionary,” not status quo, pro-corporate “evolutionary” policies.

Jeff Jones, James Kanne, and John Harter also contributed to this piece. Jones is a Missouri Rural Crisis Center member, a 4th generation cattle and grain farmer from Callaway County, MO. Kanne is a Land Stewardship Project member and dairy farmer from Frankin, MN. Harter is the Chair of Dakota Rural Action, and a rancher from Colome, SD.