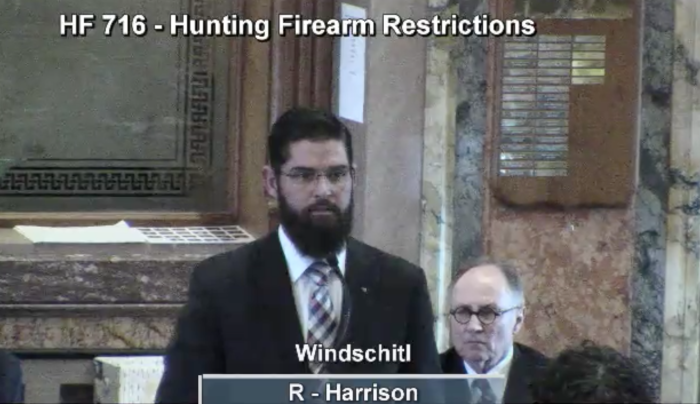 Children supervised by a responsible adult would be able to hunt deer with a "pistol or revolver" under a bill the Iowa House approved on March 20, mostly along party lines.

House members rejected a Democratic effort to restore language that had gained bipartisan support in committee and would have required minors to complete a hunter education course before using such weapons for hunting.

House File 716 includes uncontroversial provisions related to regulations of hunting weapons and one section that prompted about 50 minutes of spirited floor debate (beginning at the 3:49:30 mark of this video). Language to be added to the code is underlined here:

Introducing the legislation, State Representative Matt Windschitl said it would correct an "oversight" in the 2017 omnibus gun bill. One section of that law allowed Iowans under age 21 "to possess a pistol or revolver" while learning marksmanship or proper gun handling, if directly supervised and with the permission of a parent, guardian, or spouse.

The 2017 bill did not permit parents and guardians to supervise children using those types of firearms when hunting. (Under current law, kids age 12 and up can hunt with rifles and without adult supervision, if they have a hunting license and have passed an education course, O.Kay Henderson reported for Radio Iowa.)

A gun shop owner and leading advocate for firearms legislation, Windschitl touted the measure as allowing parents to make their own decisions for their children.

AN END RUN AROUND BIPARTISAN CONSENSUS

When the bill (then named House File 179) was considered in the Natural Resources Committee, Democratic lawmakers raised concerns that very young children didn't have the hand development to safely hold and use this type of weapon. Members of both parties agreed to language requiring a young person to have completed a hunter education course.

Windschitl doesn't serve on the Natural Resources Committee and didn't like the compromise. So he exercised his prerogative as a member of the Republican leadership team to assign the bill to the Public Safety Committee, where he ran it through a new subcommittee and convinced colleagues to alter the wording before sending the bill to the House floor.

Democratic State Representative Todd Prichard offered an amendment to restore the requirement that a minor take a course before being allowed to hunt with a pistol or revolver. With his amendment, that portion of the bill would have read as follows:

Windschitl characterized that proposal as an "arbitrary" regulation. The Iowa Department of Natural Resources only offers the hunting course to children at least 11 years old, with the understanding that the certificate becomes valid at age 12. Parents may want to start teaching younger kids to hunt with smaller firearms. (While the word "pistol" may be used interchangeably with "handgun," Windschitl speculated that families would typically be hunting with weapons resembling rifles, but which the federal government defines as pistols.)

Prichard countered that a mandatory gun safety course before kids hunt with revolvers is a "common-sense regulation," not an "arbitrary" rule. He found it "disappointing" that Windschitl ditched language a committee had vetted and approved on a bipartisan basis. His Democratic colleagues, State Representatives Phyllis Thede and Sharon Steckman, recalled discussions in the Natural Resources Committee that produced consensus around a better bill, taking into account young children's level of muscle control and the training that becomes available at age 11.

House members rejected Prichard's amendment on a 50 to 46 vote (roll call). All 45 Democrats present and Republican Andy McKean supported the amendment; the other 50 GOP lawmakers in the chamber opposed it.

"I DON'T HAVE THE SAME DEGREE OF TRUST"

During final debate on the bill, Democratic State Representative Art Staed challenged Windschitl: could a kindergarten teacher take a class of 5-year-olds out hunting with pistols or revolvers, if all the parents signed permission slips? Windschitl said one adult could not take a group of children hunting, since DNR rules would require a one-to-one ratio of children and supervising adults, each with a hunting license.

So a teacher could line up enough chaperones to take a group of 5-year-olds hunting in the woods with pistols, with the consent of all the parents and guardians? Windschitl admitted that would be possible with a one-to-one ratio, though he called that scenario "unrealistic."

Staed warned we don't know how people would behave under this law. Not everyone has good judgment about supervising children and firearms. "I don't have the same degree of trust to all the parents in Iowa. Read the paper," Staed added to explain why he was a "huge no."

PRO-GUN DEMOCRAT: "I CANNOT BE A YES ON THIS BILL"

State Representative Bruce Bearinger spoke next. He was among four House Democrats who voted for the sweeping pro-gun bill two years ago. At that time, he worked on an amendment that required parents to be in close proximity when allowing a child to handle guns.

Bearinger had "one major concern" about the bill before the House on March 20, he told colleagues.

I voted in favor of the omnibus gun bill several years ago. I do believe that parents are responsible. But my understanding of that, was that one-on-one ratio teaching safety and gun operation to a child, and it did not involve hunting.

The other thing that we spent a lot of time in committee, and in our caucuses with our committee in Natural Resources, was the concept of a clean kill. Much of the auspices of this bill was to ensure that the pistol used was of adequate caliber, the barrel was of adequate length, and that there was a type of rifling done that would ensure accuracy and make it easier for that weapon to get and engage in a clean kill.

All of us that hunt understand how important a clean kill is, and how much work it is with a deer that's been shot in a fashion that is not a clean kill.

So all of that effort that we put forth to ensure a clean kill--I have difficulty when it comes to any age range handling a gun, for both reasons that were brought forth, such as the size of the hand. But also for cognitive development that direct supervision may or may not be able to control.

So, yes on the other bill for many good reasons, but this to me is a different situation. You're never one on one in the woods. There's always other hunters around. And there's always a chance of putting a deer in a position where you have not created the clean kill. And as a hunter myself, I feel that that goes too far for me, and I cannot be a yes on this bill.

"I BELIEVE THAT PARENTS KNOW BEST"

Republicans Terry Baxter and John Wills spoke in support of the bill, describing their experiences hunting with a parent or teaching safety to children. Staed rose again to point out that he recently retired after 40 years of teaching. "If all parents were responsible, and if all parents knew all the gun safety measures and how to handle all of these weapons with their children," that would be one thing.

Some kids, you look the other way for a second, and they're doing just the opposite of what you've asked them to do. You're not only asking parents to be responsible here, you're saying that all of these youngsters are capable of and will be safe, because they'll follow all those directions. [...]

I challenge every bit of that nonsense. You're putting handguns in the hands of young children without gun safety courses, without the developments needed to even understand what the heck they're doing. Just because you know it and you did it with your own kids.

Well I've got to tell you, that isn't the way it works, and that's why we have DHS [the Department of Human Services]. All these kids are not going to be with perfect parents and perfect guardians that know just what to do. You're going to have injuries and death. And none of it's necessary. This is not a necessary bill. [...]

I ask each of you in this body to consider the consequences of even a single child and vote no on this bill.

Some people think that government knows best. I don't believe that to be true. Iowans know best. Iowans deserve to have this freedom to make the decision for themselves. If they choose to not teach their children these things, they don't have to.

But for those Iowans that want to carry on the outdoorsmen tradition, the sportsmen's traditions, they should be afforded that opportunity, without having, yes, what I would qualify as an arbitrary restriction on their parental rights. The bill before us gives Iowans that choice. [...]

I'm not going to ask for a show of hands, but think about this: how many people in this room have either participated in the hunting traditions with their father, their grandfather, their uncle, their mom, their family members, and they didn't have a hunter safety certificate before they did so? How many Iowans have had the exact same experiences?

The best way to teach children about firearms is to answer the questions about them. How do I know this? Because I've got two daughters who literally were raised in a gun shop. They crawled around on the floor of the gun shop. And my children know proper firearm safety.

I'm not saying that every parent has to teach their children those standards and those traditions. But by God, if they want to, they should be able to, and we should not sit up here on thrones on high and tell them that we know better, because we, collectively, do not. Iowans know best. I trust the law-abiding citizens of the state of Iowa to make the reasonable and responsible decisions. It's as simple as that.

Incidentally, McKean voted for the 2017 gun omnibus bill. Of the two House Republicans who opposed that legislation, only Michael Bergan is still serving, and he supported the current bill.

Ourth is the only House Democrat to support both House File 716 and the major gun bill from two years ago. Abdul-Samad, Breckenridge, Olson, and Wolfe opposed the 2017 legislation for various reasons, and Kurtz was elected for the first time in 2018. The three other Democratic supporters of the 2017 bill (Bearinger, John Forbes, and Tim Kacena) voted yesterday against letting kids hunt with handguns without completing a safety course.

Numerous groups lobbied for or against the wide-ranging 2017 gun bill. House File 716 attracted much less attention, and only three entities registered a position. The Iowa Firearms Coalition, which is the National Rifle Association's state affiliate, supported the bill. The Iowa Conservation Alliance and Iowa Bowhunters Association opposed it, and who can blame them? If I were a hunter, I wouldn't want to roll the dice on every parent in Iowa properly supervising and understanding a young child's capacity to handle a pistol safely.

Final note: Speaking against Prichard's amendment (around 4:01:25), Baxter asserted that the language agreed to in the Natural Resources Committee was more limited in scope and would have said only that a 20-year-old hunting with a pistol had to be supervised. "That amendment got really misconstrued and confused," he claimed. Unfortunately, the Iowa legislative website only publishes the text of amendments offered on the House or Senate floor. Amendments adopted in committee are typically handed out on paper but never posted where the public can read and evaluate them.