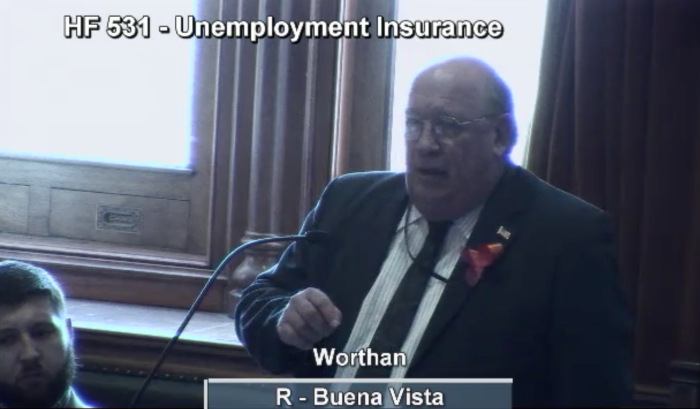 You don't hear this every day: in an Iowa House speech on March 21, Democratic State Representative Kirsten Running-Marquardt repeatedly thanked GOP colleagues for their work on a bill she opposed. House File 531 changed some aspects of our state's unemployment insurance and benefits system. The first draft was much worse than the legislation House Republicans approved on a party-line vote this week.

The state agency Iowa Workforce Development proposed this legislation, initially numbered House Study Bill 42. Two sections would have been particularly harmful for working people: depriving most recipients of one week of unemployment benefits, and lowering payments for workers with two or more children.

James Q. Lynch covered the subcommittee meeting on House Study Bill 42 for the Cedar Rapids Gazette. The department wanted to require workers to satisfy "a single one-week waiting period during the individual's benefit year." Delaying the start of benefits would represent a permanent loss of income for most.

The out-of-work employee still would get payments, but only starting with what now is the second payment. The first week of payments would come only at the end.

For most, though, that would mean not at all. Only 25 percent of all unemployment insurance claimants exhaust their full 26 weeks of benefits, according to Workforce Development. The changes would cause a hardship for unemployed workers who live paycheck to paycheck, said Felicia Hilton of the North Central States Regional Council of Carpenters.

Many construction workers typically are unemployed for four or five weeks a year — far short of the 26 weeks of unemployment necessary to collect that first week’s worth of benefits. Over their careers, the loss of benefits would amount to thousands of dollars, she told the subcommittee.

About half of some $360 million Iowa's unemployment trust fund paid out last year "went to workers off the job for four weeks or less," Lynch reported. Running-Marquardt argued during the subcommittee meeting that the first week of unemployment benefits "is the most important in terms of family stability."

Republicans agreed in February to remove those sections before the House Labor Committee approved the bill, now numbered House File 531.

Speaking on the House floor (starting around 12:02:10 of this video), Running-Marquardt expressed "my absolute sincere appreciation" for House Labor Committee chair Dave Deyoe and Worthan, who worked with her and fellow Democrats Bruce Hunter and Jeff Kurtz to take out "that part of the bill that didn't make sense for Iowans."

Two remaining sections kept Running-Marquardt and other Democrats opposed to House File 531. Current law allows Iowans to collect up to 39 weeks of unemployment after a business closes, while someone who was laid off for other reasons can collect only 26 weeks. (Presumably that's because a business closure tends to lead to a higher number of job losses in a community, making it harder for those affected to find other work.) Under House File 531, unemployed people could collect only 26 weeks of benefits, whether they lost a job due to a business closure or some other layoff.

Worthan spun this change as bringing "parity" to the system. But analysis by the nonpartisan Legislative Services Agency indicates the new eligibility rule would lead to $880,000 less in trust fund payouts during the current fiscal year and $5.3 million every subsequent year. That's a lot of money jobless Iowans won't be able to spend supporting their families. It also represents lost revenue for businesses providing goods or services in towns where a closure may leave many people out of work.

Another section would move landscapers and nursery businesses to a category including construction trades, increasing unemployment insurance payments for that industry by about $910,000 a year, according to the nonpartisan analysis.

Running-Marquardt couldn't support the bill because of those concerns, she told House colleagues. Even so, she wrapped up her remarks by again thanking Deyoe and Worthan for making House File 531 "a better bill."

"WE ARE PUTTING EVERYONE ELSE ON NOTICE"

Worthan's closing remarks came with a warning. Iowa is among only eight states that pay unemployment benefits without requiring a one-week waiting period. Iowa Workforce Development proposed the one-week delay because in some trades, Worthan claimed, apprentices do one week of unpaid training each quarter. They draw unemployment benefits for those four weeks each year.

The draft bill was designed to "put some of our employers and our employee groups on notice that we don't believe what they're doing fits in unemployment law," Worthan explained. Unemployment benefits are supposed to be for people who are jobless and looking for work. "These apprentices are neither."

Worthan applauded the contractors and employee organizations that have "stepped up" and made provisions to pay apprentices some other way during their training weeks, instead of filing for unemployment four times a year. "We are putting everyone else on notice that a year from now, we will be looking at this very closely again and maybe having to do some action."

All the Republicans present voted to pass House File 531, while all Democrats in the chamber opposed the bill, which now goes to the Senate.

UPDATE: I forgot to mention that the Iowa Association of Business and Industry was the only organization to lobby for the original bill. That group typically supports any policy to reduce benefits of any kind to workers. Iowa ABI registered "undecided" on the revised bill; only the Iowa Chamber Alliance was in favor. A number of labor organizations lobbied against both versions.