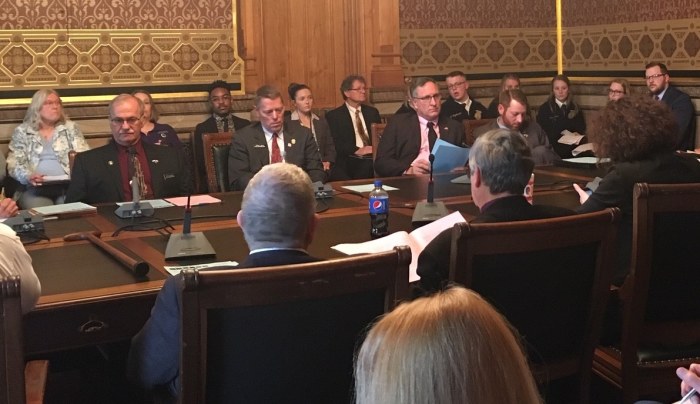 There is no magical spell or wand that will restore Iowa’s beautiful landscape and clean water. We all know what it will take; our elected officials simply lack the intestinal fortitude to make it happen. Scientific research tells us that our soil loss woes, fast-moving damaging flood waters, and battle to keep our drinking water sources safe are tied to several factors, but an important one is the lack of enough conservation practices that trap soil and slow water on the landscape. Instead we till fencerow to fencerow, leave the topsoil bare much of the year, and then look elsewhere for solutions.

Iowa is the leading contributor to the nitrogen load to the Gulf of Mexico’s dead zone. The leading contributor. And those loads are not less than they were 10 years ago — they are more. That’s not okay, and we can do better. We must tie government incentives to mandatory, strategically-placed conservation practices. We must revamp agricultural tile drainage law after 100 years and bring it in line with 21st century values of technology, public health, habitat and recreation access. Our Environmental Protection Commission must direct the Iowa Department of Natural Resources to properly enforce the Clean Water Act.

Any law or policy that makes it harder, not easier, to take land out of production that could instead serve to slow down our water is not based on science. Doing so turns a deaf ear to Iowans in rural and urban areas who seek to stop damaging flooding, continued pollution of our waters, and the loss of natural landscapes that encourage young people to make Iowa home.

Originally known as Senate Study Bill 1221, Senate File 548 passed out of the Iowa Senate last month on a mostly party-line vote. (Democratic Senator Kevin Kinney and 31 Republicans supported the bill, Republican Brad Zaun and sixteen Democrats voted against it.) The Iowa Farm Bureau and Iowa Cattlemen’s Association lobbied for its passage, while numerous environmental groups and government entities opposed it.

The bill was initially assigned to the Iowa House Natural Resources Committee, but that committee’s leader, Republican Representative Rob Bacon, did not support the concept. So two days later, the chamber’s GOP leaders sent the bill to the House Agriculture Committee.

To no one’s surprise, the reassignment kept the conversation focused on how the use of the State Revolving Fund supposedly gives a buyer an unfair advantage over young or new farmers. The House Agriculture Committee approved the bill on April 3 along party lines, twelve votes to nine.

During the committee hearing, someone claimed a vote against Senate File 548 was “a vote against family farms.” However, this bill does little to address real barriers for new farmers. Ir immediately shuts down the conversation about an effective, targeted solution that works to protect Iowa’s property owners from flooding and polluted drinking and recreational waters.

Having survived the legislature’s second “funnel,” this bill is eligible for a vote on the House floor. The Iowa Environmental Council continues to call on legislators to oppose Senate File 548 and instead look for bold, workable solutions to our water crises that are based on science, reason, and compassion.