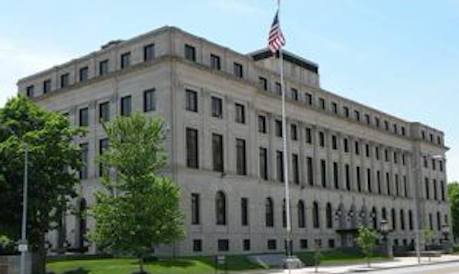 Less than six weeks after Governor Kim Reynolds signed that law into effect, the same plaintiffs were back in federal court, arguing that the statute violates the First Amendment.

The American Civil Liberties Union of Iowa is representing the same plaintiffs who challenged the old law in 2017:

As in the 2017 lawsuit, the defendants are Governor Kim Reynolds, Iowa Attorney General Tom Miller, and Montgomery County Attorney Bruce Swanson. He was named because he “is primarily responsible for the enforcement of criminal laws in Montgomery County,” which is “the site of an egg farm where PETA would conduct an undercover investigation in response to a 2017 whistleblower complaint, but for the Ag-Gag law.”

The plaintiffs are making four claims, starting on page 33:

1. The law violates the First Amendment by being “overbroad.”

The law in question is overbroad in this sense because it is drafted so broadly that it violates the free speech rights of third parties not before the court, such as labor union organizers. […]

The new Ag-Gag law, although designed to target and chill animal protection activists, also criminalizes all sorts of protected speech. Intentionally or not, the law chills and criminalizes a plethora of protected speech that is not even related to animal welfare, including that concerning worker safety, food safety, labor laws, and other types of agricultural industry misconduct.

2. The law imposes content-based and viewpoint-based discrimination, in violation of the First Amendment.

The new Ag-Gag law is a content-based restraint on constitutionally protected speech on a matter of significant public concern; it is not narrowly tailored to a compelling government interest. […]

By singling out the agricultural industry for protection against political speech that may be harmful to its profits, the new Ag-Gag law must be treated as a content- and viewpoint-based regulation. In practice, the law ensures that only one side of the debate about industrial agricultural facilities can be raised. […]

The new Ag-Gag law is not narrowly tailored because Iowa already has laws protecting the interests that purportedly motivated the legislature—laws protecting privacy, prohibiting trespass, and promoting biosecurity. The only “harm” not already accounted for by existing law is the embarrassment and political and economic fall-out suffered by the agriculture industry when otherwise-legal undercover investigations paint the industry in a negative light. Shielding an industry from criticism cannot be considered a legitimate, much less a “compelling,” government interest.

3. The law is unconstitutionally vague, in violation of the First and Fourteenth Amendments.

The new Ag-Gag law’s prohibition on using deception to gain access or employment with an intent to cause “other injury,” as distinct from physical or economic harm, violates the First and Fourteenth Amendments on its face because “other injury” is so vague as to fail to provide adequate notice to individuals of what is speech or conduct is prohibited. Such language is so unclear that persons of common intelligence must necessarily guess as to its meaning and differ as to its application even though laws prohibiting First Amendment-protected activities must have a particularly high level of clarity to protect citizens’ rights. For the same reason, such vague language gives government officials unfettered discretion in its enforcement, and causes Plaintiffs and other to avoid First Amendment-protected activity in order to avoid prosecution.

4. The law “substantially burdens Plaintiffs’ exercise of a fundamental right—namely, freedom of speech, in violation of the Due Process Clause of the Fourteenth Amendment.”

Although state legislators modeled this bill on portions of an Idaho law that survived a federal court challenge, the plaintiffs’ arguments seem persuasive. Anyone who listened to the legislative debate knows that the primary purpose of the bill was to prevent critics from investigating and exposing harmful practices at agricultural or food production facilities. Bleeding Heartland transcribed portions of lawmakers’ speeches, and the plaintiffs’ court filing recounted other quotes from the Iowa House and Senate floor.

59. Representative [Jarad] Klein, speaking in support of the bill he introduced, said he “will not stand by and allow [Iowa farmers] to be disparaged in the way they have been.”
60. Representative [Bruce] Bearinger, speaking in support of the law, stated that the law was necessary due to “extremism” and that it was “an important bill to protect our agricultural entities across the state of Iowa.”
61. Senator [Ken] Rozenboom noted that agriculture contributes $38 million in economic output in Iowa and that “agriculture in Iowa deserves protection from those who would intentionally use deceptive practices to distort public perception of best practices to safely and responsibly produce food.”
62. On information and belief, there are no other statutes in Iowa that target a specific category of whistleblowing, investigations, or investigative journalism in a particular industry. Undercover investigations of, for example, financial institutions or medical providers are still permitted.
63. Moreover, laws prohibiting fraud, trespass, adulteration of food products, and theft of trade secrets already exist in Iowa. See, e.g., Iowa Code §§ 714.8-714.13 (criminal fraud); 189A.10 (fraudulent practices in meat and poultry inspection); 716.7-716.8 (trespass); 190.3- 190.9, 190.15 (adulteration of food); 550.3-550.4 (theft of trade secrets).

Reynolds reacted to ACLU’s lawsuit with a written statement vowing to defend the law. “The Ag Trespass bill is designed to protect Iowa farmers from safety threats or biosecurity risks that untrained people on their property may cause. I am committed to protecting Iowa farmers and ensuring the safety and security of their livestock.”

Defendants have produced no evidence that the prohibitions of § 717A.3A are actually necessary to protect perceived harms to property and biosecurity. […] Defendants have made no record as to how biosecurity is threatened by a person making a false statement to get access to, or employment in, an agricultural production facility.”

doesn’t mandate better hygiene to promote biosecurity at agricultural facilities. It does nothing to protect against bacteria or viruses carried by those who might sneak in to take cheerful selfies and praise Iowa farm operations on their social media feeds.

Only people with critical views or seeking to spread negative messages about conventional farming practices could be charged with a crime.

That’s the essence of a viewpoint-based speech restriction. I wouldn’t bet on the new law being upheld.

Appendix: April 22 news release from the ACLU of Iowa:

DES MOINES, Iowa – A coalition of public interest groups has filed a lawsuit in the U.S. District Court for the Southern District of Iowa that challenges the constitutionality of Iowa’s newest ag gag law.

In March, Gov. Kim Reynolds signed into law the “agricultural production facility trespass,” which like an earlier ag gag law that was struck down in Iowa, criminalizes investigations at agricultural facilities, including food and meat processing plants, livestock facilities, and puppy mills.

In January, a federal court struck down a different Iowa ag gag law, which the Iowa Legislature passed in 2012. This newer ag gag law was a direct response to the earlier law being deemed unconstitutional.

The new law creates a new crime—called “agricultural production facility trespass”—that makes it illegal for a person to gain access to an agricultural production facility through deception if the person intends to cause “economic harm or other injury” of the facility. Deception is defined broadly to include both lies and omissions, and there is no definition or limitation on what “other injury” includes.

But the First Amendment protects exposés, boycotts, and protests of agricultural facilities, even though those activities may injure a business’s profits and reputation.

“The legal challenge we filed today is important to protecting free speech in Iowa,” said Rita Bettis Austen, ACLU of Iowa legal director. “An especially grievous harm to our democracy occurs when the government uses the power of the criminal laws to target unpopular speech to protect those with power—which is exactly what this law is about. The Ag Gag 2.0 law aims to silence critics of worker rights abuses, animal cruelty, unsafe food safety practices, and environmental hazards in agricultural facilities. Legislators rushed to pass Ag Gag 2.0 shortly after the federal injunction of Ag Gag 1.0 came down. Enough is enough. Free speech means the government is not allowed to put the PR interests of one industry above the constitutional rights of its critics.”

The plaintiffs are the Animal Legal Defense Fund, People for the Ethical Treatment of Animals (PETA), the Center for Food Safety, Iowa Citizens for Community Improvement, and Bailing Out Benji. The plaintiffs are represented by the ACLU of Iowa, Public Justice, the Law Office of Matthew Strugar, Justin Marceau and Alan Chen of the University of Denver Sturm College of Law, and in-house counsel for the plaintiff organizations.

Violations, such as trespassing, are already covered by Iowa law. Ag Gag 2.0 once again tries to give special protection to agriculture over all other industries in our state, and over the free speech rights of those who would voice opposition to them. It has a chilling effect on journalists, advocates, and others in exposing problematic worker conditions, health and safety violations, and animal cruelty inside agricultural facilities.

Adam Mason, state policy organizing director at Iowa Citizens for Community Improvement, one of the plaintiffs, said, “The intent of Iowa’s ag gag law is clear. It is to silence those who would expose unsafe working conditions, environmental pollution, or other potential violations at factory farms and other animal facilities. The state has carved out unfair rules for industrialized agriculture that no other industry has, and that is harmful to workers and the environment because it keeps us from effectively documenting abuses.”

Mindi Callison, executive director of one of the plaintiffs, Bailing out Benji, said, “On behalf of Bailing Out Benji and all of our supporters, we are deeply saddened that we have to, again, go to court to try to hold the state of Iowa accountable for violating our first amendment rights in their recent passing of Ag Gag 2.0.”

“It took our Iowa legislators just 10 days to submit, discuss, vote on and sign this new bill into law, immediately after Ag Gag 1.0 had just been defeated in the courts. That means that even though we’ve won the right to do our work to protect puppies and dogs in striking down Ag Gag 1.0, and even though the state’s motion for stay was denied, we’re still impeded in exercising our free speech as an organization by Ag Gag 2.0,” Callison said.

“Now more than ever it is important to give a voice to those that have none and make sure that commercial dog breeding facilities are complying with the laws. Passing this law to protect agricultural facilities at all costs is irresponsible. We are honored to be standing on the right side of history in order to expose and educate the public about the atrocities that are happening behind closed doors at puppy mills in Iowa and other agricultural facilities and opposing the sale of puppy mill puppies in pet stores around the country. Bailing Out Benji will continue to be a voice for the puppy mill dogs here in Iowa and across the nation by challenging this unconstitutional legislation,” Callison said.

The lawsuit complaint can be found here.