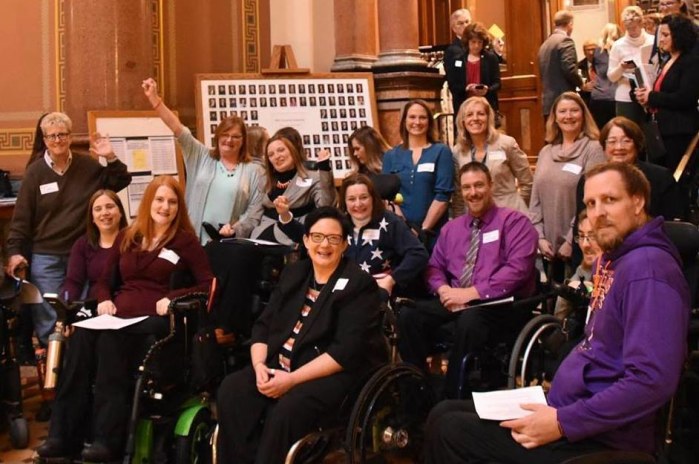 Medicaid and pineapple on pizza

This commentary was a collective effort by four people on the advocacy committee of the United Spinal Association’s Iowa chapter. -promoted by Laura Belin

Is pineapple on pizza acceptable?

This irrationally controversial question has divided households since the advent of Hawaiian pizza. Gordon Ramsay decisively says that pineapple has no place on pizza while Alton Brown is a staunch defender. How do we decide which reality cooking show host is the expert?

This is exactly what happened last week when a Republican legislator took the words of disability advocates out of context on the Iowa Senate floor.

No doubt that our foray into managed care has been difficult… But I also remember meeting just a few short weeks ago, with people that had spinal cord injuries… Of the four people that I just spoke with, one of them was not eligible for Medicaid. The other three said, the first few months were difficult, but it’s been great since then.

Whatever Miller-Meeks may have heard, those of us who were there have a different story. Of the ten attendees at the capitol on March 13, only five are dealing with the managed-care system. Of those five, one is unable to get Medicaid and another is switching to an MCO this fall. Among the three out of ten who are currently using an MCO, two have a positive experience.

We can argue all day about whether or not 66 percent success is really success when it comes to health care. But we were present to speak up for those unable to attend, who are not experiencing quality service or coverage from their MCO.

We wish Miller-Meeks had heard from those members, some of whom were working, lacked affordable and accessible transportation, or did not have a care provider to accompany them to the capitol. A number of these people have been denied medical equipment and medications, lost providers due to lack of payment, or experienced continued cuts to their care.

Had Miller-Meeks met these people, she would have seen their frustration. She would have heard how managed care by MCOs has decreased their quality of life, increased stress, and potentially cost Iowa more in health care dollars. Giving in to confirmation bias in this situation is far more dangerous than taking a side in the pineapple on pizza debate.

The Iowa Chapter of United Spinal Association Advocacy Committee would like to encourage each legislator to look past their personal and partisan biases and see these issues as they are in our daily reality. So let’s split the pie, sit at the same table, and work together to create a sustainable Medicaid program in Iowa we all can be proud of.

While the Iowa Chapter of United Spinal Association has been around for 15 years, the advocacy committee began its work in January 2019. We hope to rally our members to join the voices of others in Iowa to create positive policy change.

Top image: Advocates with the Iowa Chapter of United Spinal Association at the state capitol on March 13, 2019. Photo provided by the author and published with permission.