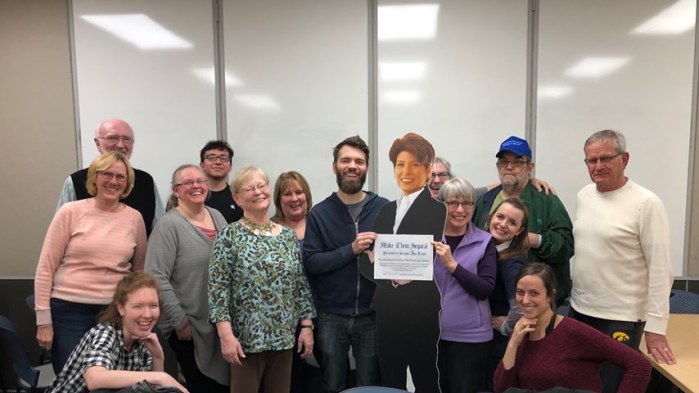 Whom does Joni Ernst really represent?

Cindy Garlock is an Indivisible activist in Cedar Rapids. -promoted by Laura Belin

U.S. Senator Joni Ernst has earned a noteworthy distinction, Iowa media recently reported. One would hope it might be something that improved the lives of ordinary Iowans. But no. She is touting what her campaign is claiming as the largest first-quarter fundraising in an off-year election in the history of Iowa politics.

The $2.8 million cash on hand that she has amassed brought a few questions to my mind. In looking for answers, I found some things Iowans may be interested in knowing about our senator and where much of her campaign funding has come from.

Ernst’s quick ascension into national politics was no accident. In 2013, she was a little known state senator. However, during her first run for U.S. Senate, Ernst was a vocal opponent to the Environmental Protection Agency and Clean Water Act, both of which provide protections for residents of her state. The Real Koch Facts website observed in 2015, “Ernst has gone so far as to oppose the Clean Water Act, a critical environmental protection that Koch Industries and its subsidiaries have run afoul of no less than 18 times in the Hawkeye State alone.” Her extreme stances captured the eye of the billionaire Koch brothers, who would stand to benefit the most if regulations like the clean waters act were rolled back.

In 2013, Ernst was invited to a gathering of wealthy Koch network donors in Albuquerque, New Mexico. This event opened the door to thousands of dollars in tv ads and tens of thousands of dollars in direct campaign contributions from the Koch network. A number of Koch affiliated operatives began pitching in, with huge sums of money being spent on TV ads, providing the fundraising infrastructure that made it very difficult to trace the source of all this money.

You’ve heard of “dark money,” right? This is the definition of dark money. And almost completely from sources outside of Iowa. So, in short, Ernst owes a much of her early success to the support of the Koch brothers, not to the voters of Iowa.

Does Joni Ernst represent Iowans or does she represent wealthy donors from across the country? A closer look at her fundraising reveals a disturbing pattern.

Here is what we know:

So it is clear that Ernst is well-positioned financially for her 2020 reelection. But at what cost to Iowans?

The question Iowans must ask themselves is whether all of this outside money comes with strings. Following the 2018 election, a Protect Our Care exit poll determined health care was the most important issue, and Democratic candidates won those voters. Yet Ernst voted to repeal the Affordable Care Act seven times and voted to seat Judge Brett Kavanaugh, a vocal opponent of the ACA, on the Supreme Court.

Ernst, one of the top recipients of NRA funding, launched her own fundraising campaign less than 72 hours after the anniversary of the Parkland and Aurora shootings. Despite the call for sensible gun legislation, Ernst was pushing the “National Right to Carry,” a bill that would allow concealed carry across all states loosening regulations. Despite Iowa’s polluted waterways, Ernst continues to talk about eliminating the EPA and celebrates rolling back initiatives like the Waters of the United States rule, a goal of the Koch brothers.

Iowans know the answer to those questions. In order to defeat Joni Ernst in 2020, we will need everyone to do their part: attend town halls, email and phone her offices, do the phone banking and canvassing that will be necessary and finally, and contribute financially to her opponent. As we are waiting for progressive candidates to announce, we can begin the process of fighting back against Ernst’s powerful money interests. Iowans need to raise funds to counter the dark money and special interest groups who are supporting Ernst’s bid for re-election. Please consider donating to this Crowdpac fundraiser, Oust Ernst in 2020, so our candidate has a running start in 2020. The race starts now.

Top image: Indivisible activists in Cedar Rapids on March 13, 2019. Photo provided by the author and published with permission.