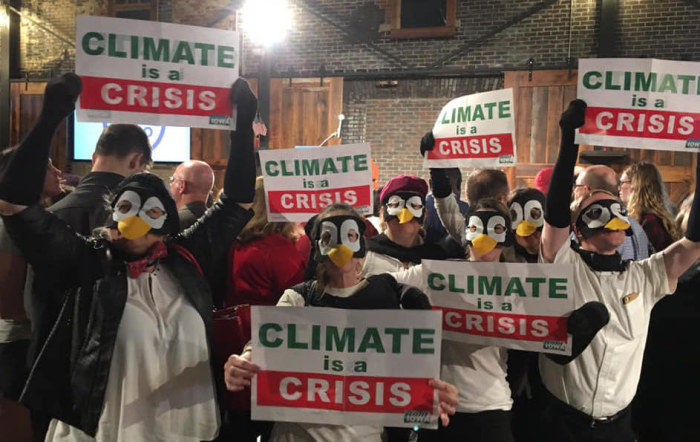 As further evidence of the efficacy of bird-dogging — or penguin-popping, as my daughter Fionna suggests we call it — look no further than Joe Biden’s just-finished campaign blitz through Iowa.

At his first three stops — Cedar Rapids, Dubuque and Iowa City — Biden barely mentioned climate change. “He made some basic statement about climate, but it wasn’t anything like we’d want to hear,” said Christine Lehman-Engledow, who attended Biden’s rally in Cedar Rapids.

In Iowa City, Diane Lahr reports, “There was some room to grow on Biden’s environmental platform. He mentioned renewable energy, but I’m hoping he will really address it in the future.” 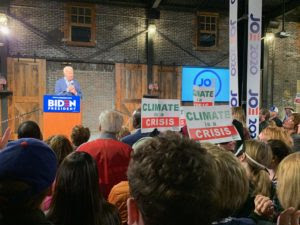 One of the penguins, Sheila Knoploh-Odole, said, “We’re dressed as penguins in solidarity with the second largest emperor penguin colony in Antarctica that just collapsed due to climate change. Candidates for president need to make fighting climate change their top priority, because if we don’t achieve a 45 percent reduction in emissions by 2030 and 100 percent carbon neutrality by 2050, nothing else will matter.” 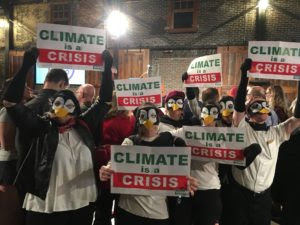 The results of our action? Biden talked longer about climate change in Des Moines than he did at the other three Iowa stops combined!

More significantly, our action was picked up by: the New York Times, the Wall Street Journal, ABC News Politics (around the 51:00 mark), Courthouse News, WOI-TV (the local ABC affiliate), Circa, and more.

That’s in addition to the coverage earlier this week after Bold Iowa’s Climate Penguin action at Andrew Yang’s rally.

Biden is an eloquent speaker and an all-around likable guy. We once played pool over a beer and conversation — well, pretty much a one-way conversation (see the excerpt from Chapter Two of Marcher, Walker, Pilgrim for details). But Biden comes with two major pieces of baggage. One could be fixed, the other may be insurmountable:

2. He’s the epitome of the status quo.

In recent weeks, we’ve seen other presidential candidates (Warren, Gillibrand and O’Rourke) advance their standing on the climate crisis. Biden could certainly improve his weak-on-climate problem, too — and Bold Iowa’s penguin brigade is ready to help.

To Biden’s other problem: Given America’s increasingly anti-establishment electorate, the candidate most identified with the status quo loses (think Hillary Clinton, Fred Hubbell, Bruce Braley, John Kerry, etc.). Among the twenty Democrats running for president, Biden is most firmly saddled with the status-quo label. Despite what insiders within the Democratic Party want us to believe, Biden may be the Democrat least able to defeat Donald Trump.

Over the next nine months, leading up to the February 3, 2020 Iowa Caucuses, we’ll see whether Biden chooses that path or the more tried, tested, and failed path that other status-quo Democrats before him have followed. It’s up to him.