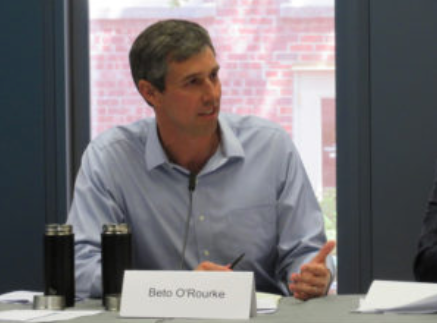 Apology is Beto O'Rourke's path out of climate contradiction

Six Bold Iowa Climate Bird Dogs arrived at Beto O’Rourke’s CNN town hall in Des Moines last week with great expectations. O’Rourke had just released a climate plan that generated much excitement. He talked about climate during his recent Iowa tour, and the plan is featured prominently on his website.

Forty-five minutes into the CNN town hall, Terrance Pendleton asked O’Rourke a general question about climate. That was followed by Patrick Bourgeacq’s more specific inquiry into O’Rourke’s past donations from fossil-fuel interests and his pro-oil-industry votes while in Congress.

O’Rourke responded adequately. Then something unexpected happened. Moderator Dana Bash picked up where Bourgeacq left off. She pushed O’Rourke about his controversial 2015 vote to support lifting the ban on crude oil exports.

Historical perspective: On October 9, 2015, the U.S. House voted to lift the 40-year ban on crude oil exports during the heat of the fight against the Dakota Access Pipeline. That wasn’t a coincidence. The pipeline was never about U.S. oil independence. It was about selling fracked oil to the highest bidder. Dakota Access officials assured us that the oil running through Iowa was for domestic consumption. Lifting the ban on crude oil exports exposed the company’s lie.

O’Rourke voted for the bill, [Editor’s note from Laura Belin: The lone Democrat representing Iowa in Congress in 2015, Dave Loebsack, voted against that bill.

UPDATE/CORRECTION from Laura Belin: Rohan Patel, former senior adviser to Obama on climate policy, pointed out that the House-approved bill O’Rourke voted for in October 2015 died in the U.S. Senate. The legislation Obama signed that ended the ban on crude oil exports was the December 2015 omnibus, which also included good energy policies such as the production tax credit for wind and the investment tax credit for solar. O’Rourke and Loebsack were among the 166 House Democrats who voted for the omnibus bill.]

O’Rourke’s response to Dana Bash at the CNN town hall is worth viewing. As I watched the exchange live, I was wishing O’Rourke and I could talk casually over a pint of Guinness, something along these lines (O’Rourke’s quotes taken directly from his responses at the forum):

Me: “Ouch. It’s just hard to see how someone who understands the urgency of the climate crisis, someone who just released a progressive, far-reaching plan to fight it, doesn’t regret a vote that clearly takes us in the wrong direction, takes us, in fact, one step closer to extinction.”

Beto: “Look, I drove here tonight in a Dodge Grand Caravan that is burning gasoline.”

Me: “Please, Beto. You’re better than that. I’m so over climate deniers and other detractors calling me a hypocrite because I arrive at a pipeline protest in rural Iowa by car. Sorry, the bus and train aren’t running today.”

Beto: “I want to make sure that we’re independent of the need to obtain those fossil fuels from the Middle East or Venezuela.”

Me: “Whoa. Stop right there, Beto. The legislation you supported had nothing to do with making America independent of foreign oil. It was simply about letting rich oil tycoons get even richer at the expense of our land, water, property rights, and climate. Come on, you know that!”

Beto: “I’d rather those jobs and that exploration take place here in this country to satisfy our energy needs and the energy needs around the world.”

Me: “So, you’re admitting you’re ok with our land being exploited to satisfy the rest of the world’s thirst for oil? Look, if that’s your perspective on climate, it puts you on the same page as Joe Biden. Sorry, that’s not the kind of Democrat I’m interested in supporting.”

Beto: “I’d love to toughen EPA standards to make sure we’re doing this in the most environmentally sound way.”

Me: “No, no, no! There’s no environmentally sound way to exploit, transport, refine, and burn oil. Dang, Beto, look at your plan! It’s spot on. Yet defending your 2015 vote on the export ban says to Iowans that you don’t really get it.

“Here’s my advice: Admit that your vote was wrong. Apologize to the Iowa farmers, landowners, and Native communities directly impacted by the pipeline. Apologize to Earth for driving another nail into an unsustainable climate future. Then perhaps, after a thorough and sincere mea culpa, Iowans will take your climate plan seriously.

“Otherwise, Beto, people see your jumping on the climate bandwagon as pure political posturing. I wanna believe it isn’t. I wanna believe you mean every word of it, and that one of the first things you’ll do to steer America on the road to a fossil-fuel-free future is to shut down DAPL and all the pipelines causing so much immediate harm and doing so much long-term damage.

“Yup,” I’d say as I chug the final swig of my Guinness. “The only way out of your dilemma is through contrition. But it has to be sincere, because one thing Iowans are skilled at is seeing through a phony. I, for one, wanna believe you’re the real deal and that you’ll deliver on your climate plan. Prove me right and the next pint is on me. And you might even get my vote.”

Top image: Beto O’Rourke speaking at his climate change roundtable in Des Moines on May 6, 2019. Photo by Shari Hrdina, published with permission.