Chris Jones is a research engineer (IIHR-Hydroscience and Engineering) at the University of Iowa. An earlier version of this post was first published at the author’s blog. -promoted by Laura Belin

It turns out Iowa has 416 square miles of surface water area, which is 6th-lowest of all the states (data here). The country as a whole is about 7 percent surface water area, ten times higher than Iowa. Depending on how you define a lake, Iowa has about 160 public lakes, including four Silver Lakes but remarkably no Green Lake, at least in name. A handful of these lakes were here when Europeans first arrived, formed 12,000 years ago by the melting Wisconsin glacier. We drained a bunch of stuff left behind by the glacier, most of which would now be thought of as wetlands and might not fit our current definition of “lake." But some clearly were lakes.

Captain James Allen and his Dragoon explorers were some of the first Europeans to lay eyes on the marshy Des Moines Lobe area of north-central Iowa in 1844. In his journal, Allen remarked that

“then comes a series of lakes, many of them connected by slues and straits to form chains, almost impossible to go around or to cross, and extending from the Des Moines to the northward and eastward. This kind of country continues on the river about 35 miles, giving the greatest embarrassment to the traveller, who must frequently betake himself to a raft or ponton wagon to make his progress through it.”

“From the waters of the Missouri, we next come in about 30 miles to the upper branches of the Raccoon. Approaching these branches the prairie is flat and wet; and much filled up with marshes and grassy ponds, through which it is difficult to find a practicable route.” (Spelling errors are his.)

Our great-grandfathers drained about 3.5 million acres of standing water in this area of Iowa, which is more than 10 times the area of our existing surface waters. Think about that one for a minute.

Because we have so few lakes, and because so many of them were constructed (and for several, restored) at taxpayer expense, a reasonable person might think we should pull out all the stops to protect them. That’s what I thought anyway, when I agreed to be on Iowa DNR’s Lake Nutrient Science Advisory (NSA) committee in 2007. There were ten other committee members, most if not all more distinguished and knowledgeable about lake science than me. Most of the group are now retired.

The committee set out to evaluate the existing lake water quality science from Iowa, surrounding states, and other countries, with the objective of recommending water quality standards for the nutrients nitrogen (N) and phosphorus (P). This was not an easy task because there are not direct cause-effect relationships between the N and P drivers and the response variables important to Iowa lake visitors, the most important being water clarity.

This is not to say that N and P aren’t important for water clarity. They are. What we know is that high levels of one or both increase the likelihood of poor lake water quality. Think of nutrients like they are high blood pressure. Having it doesn’t mean you will have a stroke, but ... it’s a risk factor. Based on the information available to us, we recommended standards of 35 ppb for P and 900 ppb for N. The existing data strongly suggested that these were thresholds for increased likelihood of nuisance algae blooms and reduced water clarity. 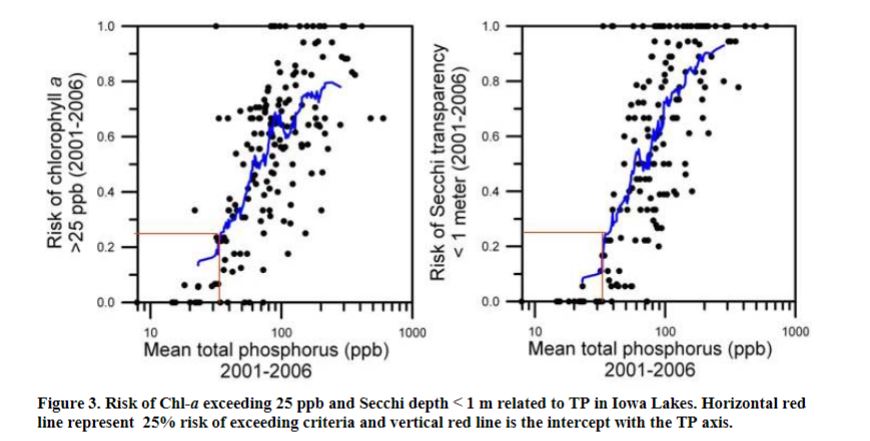 Example of the data used by the Lake Nutrient Science Advisors to develop recommended phosphorus standard of 35 ppb.

To my knowledge, there have been two petitions for rule-making to adopt the standards made to DNR and the Environmental Protection Commission (EPC), which is a governor-appointed citizen group who provide policy oversight over Iowa’s environmental protection efforts. Both were denied. The most recent petition was heard just this year.

Now, I wish to say that I do not know if Iowa lakes would be any cleaner if these standards had been adopted following our report in 2008, but I believed then, as I do now, that water quality standards represent a starting point for improvement, and build some accountability into the efforts to improve Iowa’s water resources. It was painful for me to read DNR explicitly state in its recent memo to EPC that our work was not supported by science, especially after many months of work on this project. I can assure anyone interested in this issue that that statement is not correct. I never heard this stated in 2008.

By now you may have anticipated from this essay’s title that at some point I would cannonball into Lake Darling, which is in southern Washington County. Here goes nothing.

Lake Darling is a constructed lake (1950) that is the focal point of a state park of the same name, named after the Pulitzer Prize-winning (twice) Iowa cartoonist Ding Darling. Darling was an important figure in the early conservation movement and would no doubt weep if he saw some of our lakes in their mid-summer, algae-choked condition.

A $16-million lake restoration project was completed for Lake Darling in 2014. As part of the project, about 80 percent of watershed landowners installed erosion and nutrient runoff controls. At the time, DNR State Park Bureau Chief Todd Coffelt said. “the key to a good state park is a good body of water.”

Lake Darling has a relatively large watershed compared to its lake area (41:1). Knowing what it now knows now about Iowa’s landscape, DNR would not build a lake with that large of a ratio. Like other constructed lakes, Darling is a flow-through system and water flowing in from a large area captures a lot of pollution which can then degrade the condition of the lake. In the case of Lake Darling, however, one has to wonder if a smaller watershed would be much of a benefit.

Within 1.5 miles of the lake in its watershed are nineteen fields where hog manure is being applied. Some of these fields are within a half-mile of the lake. A person knowledgable of the situation told me those nineteen fields are included in 35 manure management plans (MMPs). To confirm, I asked the DNR field office and was told that those numbers “could be accurate." DNR “doesn’t track how many plans are in each field because the MMP is a plan and is subject to change at any time.” Nor does DNR know how much N and P is being applied to those fields.

Thinking that I don’t need to be any more diligent than our regulatory agency, I’m going with that and please forgive me if you think that’s less than earnest. This all should not be a surprise to anybody, and I don’t write this to indict DNR staff. It is the state of affairs in lowa and has been for a long time. There are 346 confined animal feeding operations (CAFOs), 32 open feedlots, and close to 500,000 hogs just in Washington County (data here) where Lake Darling State Park is located. There are four staff people in the local Iowa DNR field office that work on CAFO issues in Washington and 15 other counties, but none of them focus on AFOs exclusively. There are about 1,600 CAFOs in total within the jurisdiction of that field office. 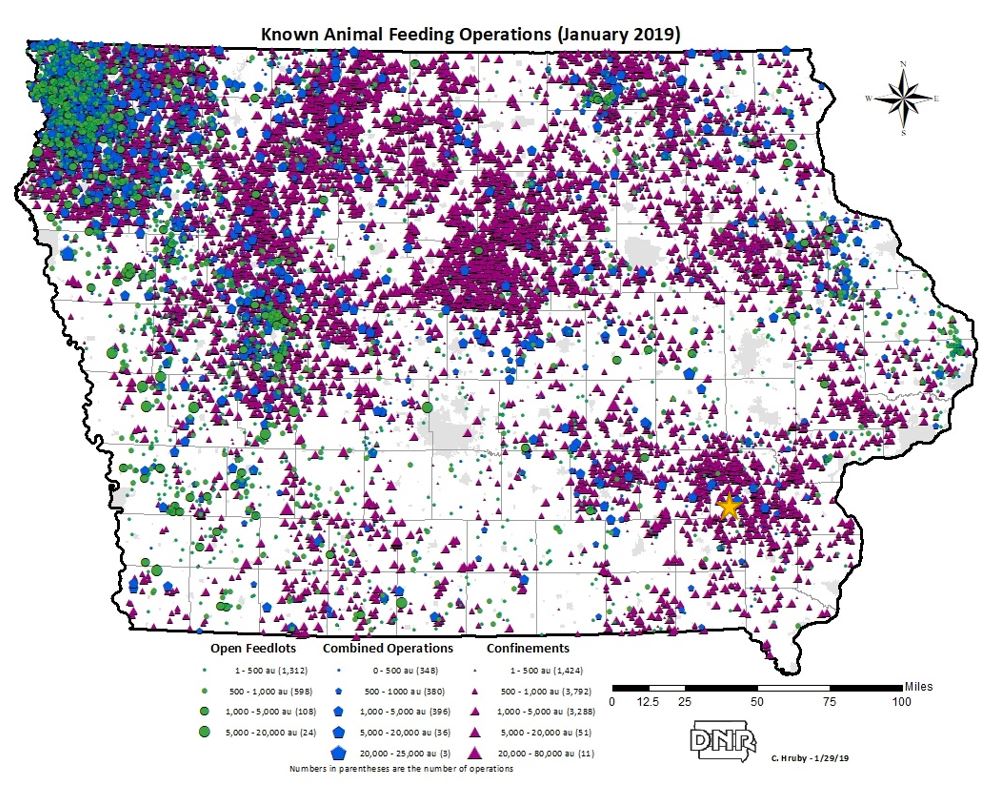 Does the above scenario put the lake at more risk than others without such a stressor? The scientific literature says yes. I and others (1,2,3) have documented how crop rotations that include manure fertilization oftentimes receive nutrient inputs far above recommended agronomic rates. Do I know that to be true for Lake Darling? I don’t, but I very likely have the capacity to provide a reasonable estimate. The manure management plans should in theory restrict what the high-end fertilization rates should be, but not many people I talk to believe that is the case, at least statewide. I want to emphasize that I’m accusing no one of anything illegal or untoward when it comes to Lake Darling. However, I think any reasonable person would conclude the lake is in a risky spot.

Ok, back to the nutrient standards for lakes. Following the restoration, a DNR fisheries biologist was quoted as saying Lake Darling “will be clear to depths of 4 feet, greatly enhancing the environment for both aquatic species and people.” This was exactly the situation that the proposed nutrient standards were designed to protect! In the Lake Nutrient Science Advisors report, we stated, “The consensus of the NSA (committee) is that a Secchi depth less than 1.0 m (about 3.3 feet) in lakes is not compatible with primary body contact recreational use (Class A).”

Ten years after the NSA report, DNR stated in its memo to EPC that nutrient standards would create an untenable economic burden for local communities forced to confront degraded or impaired lakes. Is that the case here? I’m not an authority on economics, but I do know the current DNR seems to be ignoring some of its own information in making that statement, specifically on the economic benefit lakes provide to the surrounding area.

In their assessment of Lake Darling, the lake and park were found to contribute $8.5 million/year to the local economy, and this before the restoration. In a county with only 22,000 people, that’s about $400 per person per year. Lake Darling is not anywhere close to a municipal boundary and is not used for municipal water supply nor does it receive point source discharges. The lake’s economic impact may be dwarfed by that of livestock, I don’t know. But let’s cut the crap here. It seems pretty clear who will be economically burdened by protecting the taxpayer-funded water quality enhancement, at least when it comes to Lake Darling. For crying out loud, let’s be honest with ourselves.

I believe this is the truth: the real threat of nutrient standards in lakes or any other water body is that they bring accountability to the system, both to the regulated and the regulators. The livestock industry adamantly asserts that they are regulated. Well yeah, sort of. They are regulated in the same way driving is regulated. You get a driver’s license, you license a car, you get insurance, and the paved world is your oyster. There are speed limits, but if you’ve ever driven I-80 between Des Moines and Iowa City, you can see what they’re worth. In the unlikely event you screw up and get caught speeding or crash, then yeah, you’re “regulated."

We have an analogous system for non-point source water pollution. I’m calling it. The present system enables the livestock industry to essentially not comply with any nutrient regulations because DNR really has nothing they can regulate in any meaningful or effective way. A lot of people like it that way, because the public goes to bed at night thinking the whole thing is regulated when it really isn’t. As a result, our lakes and streams suffer. It’s taboo in many situations to talk about this, but if we are going to solve these enormous problems, then we need to have the capacity to talk about them in a frank and honest manner.

When evaluating the most recent petition for rule-making, the EPC received eight public comments. Seven were “yea” and one was “nay." The nay carried the day. Considering the current state of affairs, it likely could have been 10,000 yea with the Almighty being one of those, begging the EPC to have mercy on His creation, and the lone nay still would have prevailed.

Iowans have paid $16 million to restore Lake Darling, and a bunch more for a bunch of other lakes, including Big Creek Lake shown in the next two pictures. I for one would like to know that somebody is guarding that investment of the public’s money. I’m not convinced that there is, and I think some people like it that way. 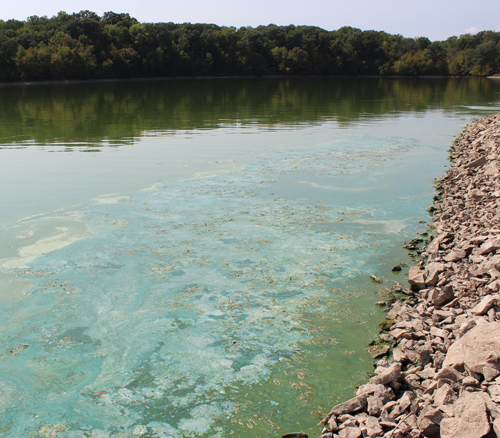 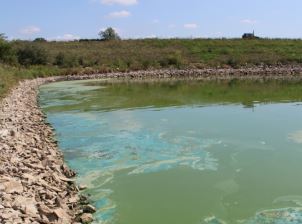