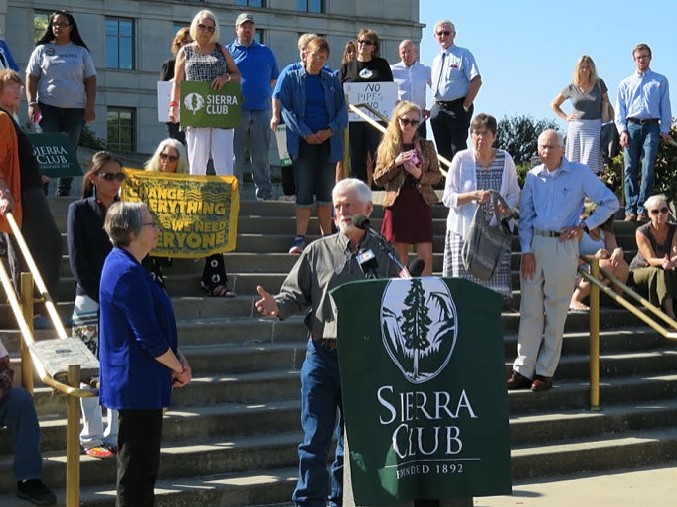 Iowa Supreme Court gets it wrong on pipeline ruling

Ed Fallon reacts to the Iowa Supreme Court’s determination that the use of eminent domain to build the Dakota Access pipeline was lawful and did not violate the state constitution. The file containing the majority opinion and dissents is enclosed at the end of this post. Landowners and the Sierra Club Iowa chapter had challenged the taking. -promoted by Laura Belin

For those of us who have fought Energy Transfer Partners (ETP) and the Dakota Access Pipeline (DAPL) for nearly five years, May 31 was a sad day. That morning, the Iowa Supreme Court ruled that ETP had the right to forcibly take Iowans’ land for an export crude oil pipeline.

And make no mistake: DAPL is an EXPORT pipeline. While I’ve yet to find anyone, even inside the oil industry, who can tell me exactly how much of the oil is destined for export, it’s estimated to be somewhere between “a lot” and “most.” Consider:

Exhibit A. The legislation passed by Congress in the fall of 2015 to lift the 40-year ban on the exportation of crude oil literally transformed the US oil industry. Which takes us to …

Exhibit B: President Obama’s recent boast that, “suddenly America’s, like, the biggest oil producer and the biggest gas — that was me, people.” (While more Democratic politicians tend to be on the public’s side when it comes to opposing fossil-fuel pipelines, do not be deceived: Our fight against Big Oil’s political allies is a bipartisan struggle.)

Exhibit C: Joe Biden’s even more recent boast about America’s role as the world’s leading oil and natural gas producer: “The United States is soon going to be the largest producer of energy of any nation in the world by the end of the 2020s.”

Exhibit D: Just last month, as reported in the Dallas Morning News, “Energy Transfer Partners will expand its operations to China and plans to open its first office outside the United States in Beijing. … China, long reliant on coal for its power needs, is beginning to turn to natural gas and imported crude oil as energy sources … More than 70 percent of China’s crude oil supply is imported.”

The evidence is clear. Iowa is merely a conduit for the transport of oil so that a few Texas tycoons can get rich and China can purchase cheap, heavily-subdized US oil. The Court missed this and chose instead to focus on the alleged benefits to Iowans, arguing that, “Iowa is a heavy user of petroleum products … and ranks eighth in the country in per capita gasoline consumption.” (page 19)

It’s at least encouraging that the Court understands the importance of climate change, even suggesting possible legislative action: “We recognize that a serious and warranted concern about climate change underlies some of the opposition to the Dakota Access pipeline. Maybe, as a matter of policy, a broad-based carbon tax that forced all players in the marketplace to bear the true cost of their carbon emissions should be imposed. The revenues from this broad-based tax could be used to offset other taxes. But policy making is not our function …” (page 37)

That potentially opens the door to other legal action. As the devastating impacts of the climate crisis mount, those most culpable in causing the crisis need to be held accountable. Again, referencing the Court’s ruling, we should force “all players,” particularly those who benefit financially, “to bear the true cost of their carbon emissions.”

Some will now say that the fight against DAPL is finally over. Perhaps the property rights aspect of the fight is over — for now. But as science makes clear, the fight against the destruction of our planet through the exploitation and consumption of fossil fuels is only going to accelerate.

Sadly, ETP is not done with us. We need to prepare for its next assault. Indications are ETP wants to expand the amount of oil running through Iowa. The most likely scenario is for ETP to build additional pumping stations to increase the flow of oil from 570,000 barrels per day to 900,000 per day! Not only would that worsen climate change, the increased pressure would also elevate the risk of a spill.

We need to stay vigilant and monitor ETP’s plans. Perhaps state and local officials will take the Court’s observations on climate change to heart and factor that into any deliberation about a proposed increase in how much oil is pumped through Iowa. And perhaps the Iowa Legislature will take to heart the Court’s suggestion to make ETP and others bear the true cost of their carbon emissions.

Appendix: Iowa Supreme Court opinions in Puntenney et al v. Iowa Utilities Board, published on May 31. Justice Edward Mansfield authored the majority opinion, joined by Chief Justice Mark Cady and Justices Thomas Waterman and Susan Christensen. Justice David Wiggins wrote a partial concurrence and partial dissent, joined by Justice Brent Appel. (They would have ruled that the pipeline was not a “public use,” and that the use of eminent domain violated the Iowa Constitution.) Justice Christopher McDonald wrote a dissent; he would have dismissed the case as moot, since the pipeline has already been built.

Top image: Photo of news conference on September 12, 2018, the day the Iowa Supreme Court heard oral arguments in this case.