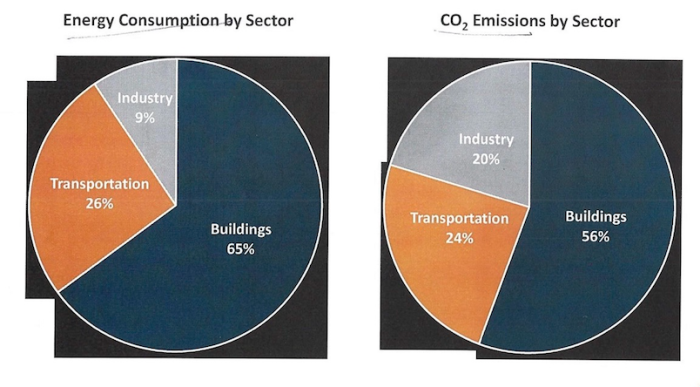 Sheila Knoploh-Odole is an attorney and local sustainability consultant who served on the advisory committee for the Des Moines Energy Policy Task Force. -promoted by Laura Belin

With a surprising vote of 7-0, the Des Moines City Council voted on April 22 (Earth Day) to advance a proposed ordinance for energy- and water-use benchmarking in buildings over 25,000 square feet throughout the City. On Monday, June 3, they will take the final vote to make this ordinance city policy.

By measuring the energy and water use of large buildings, Des Moines is poised to address its goal of lowering citywide greenhouse gas emissions 28 percent by 2025. This ordinance won’t cover the entire goal, but will put the city on a path of reducing up to 16 percent overall – IF certain unpopular parts of the ordinance are maintained.

Why large buildings? In Des Moines, buildings generally consume 65 percent of the total energy, (followed by transportation at 26 percent and industry at 9 percent), create 56 percent of polluting emissions for the city, and on average waste 30 percent of their energy and water due to inefficiencies and poor management. 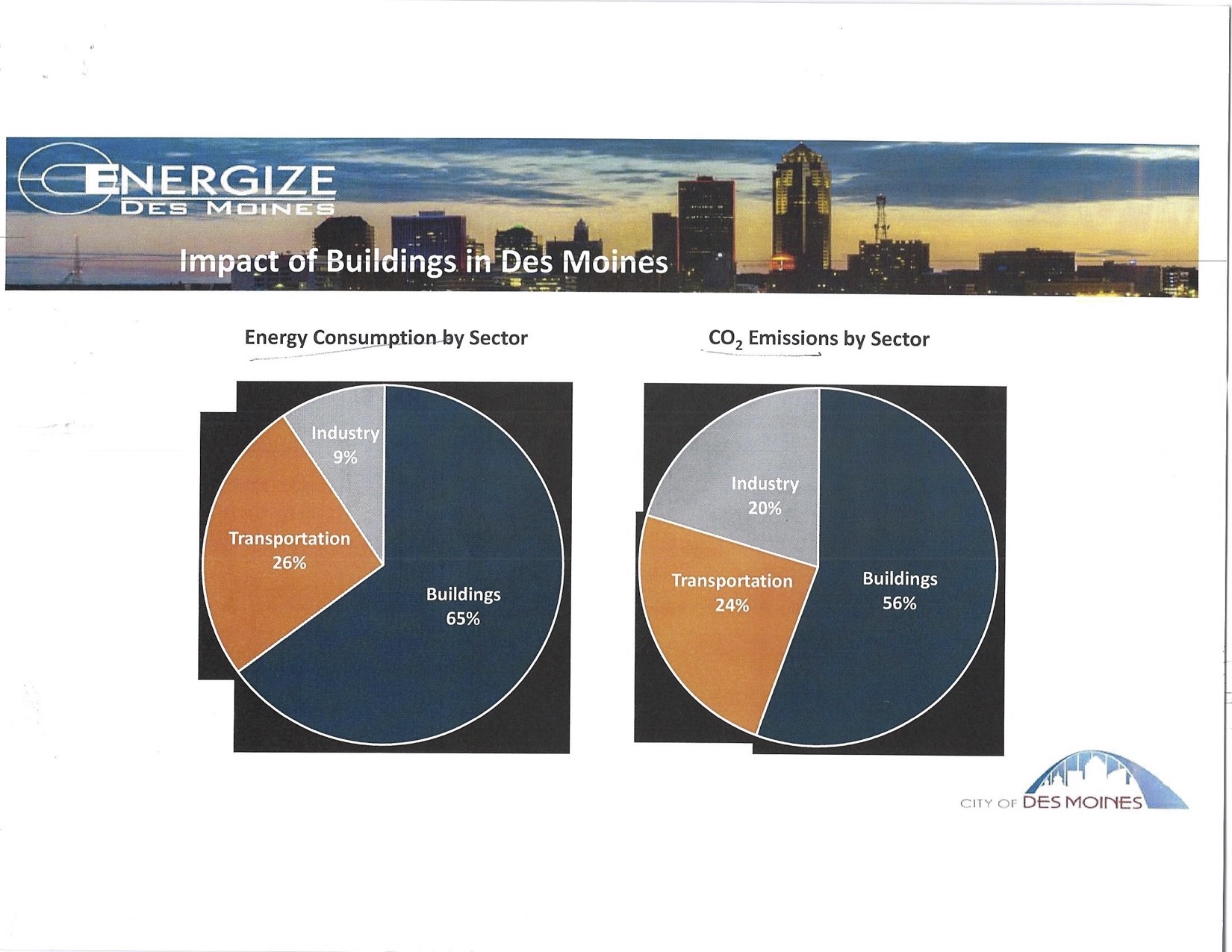 Buildings above 25,000 sq. ft. make up 1.2 percent of buildings overall, but represent 36 percent of the city’s collective building footprint and 44 percent of energy used in Des Moines buildings. 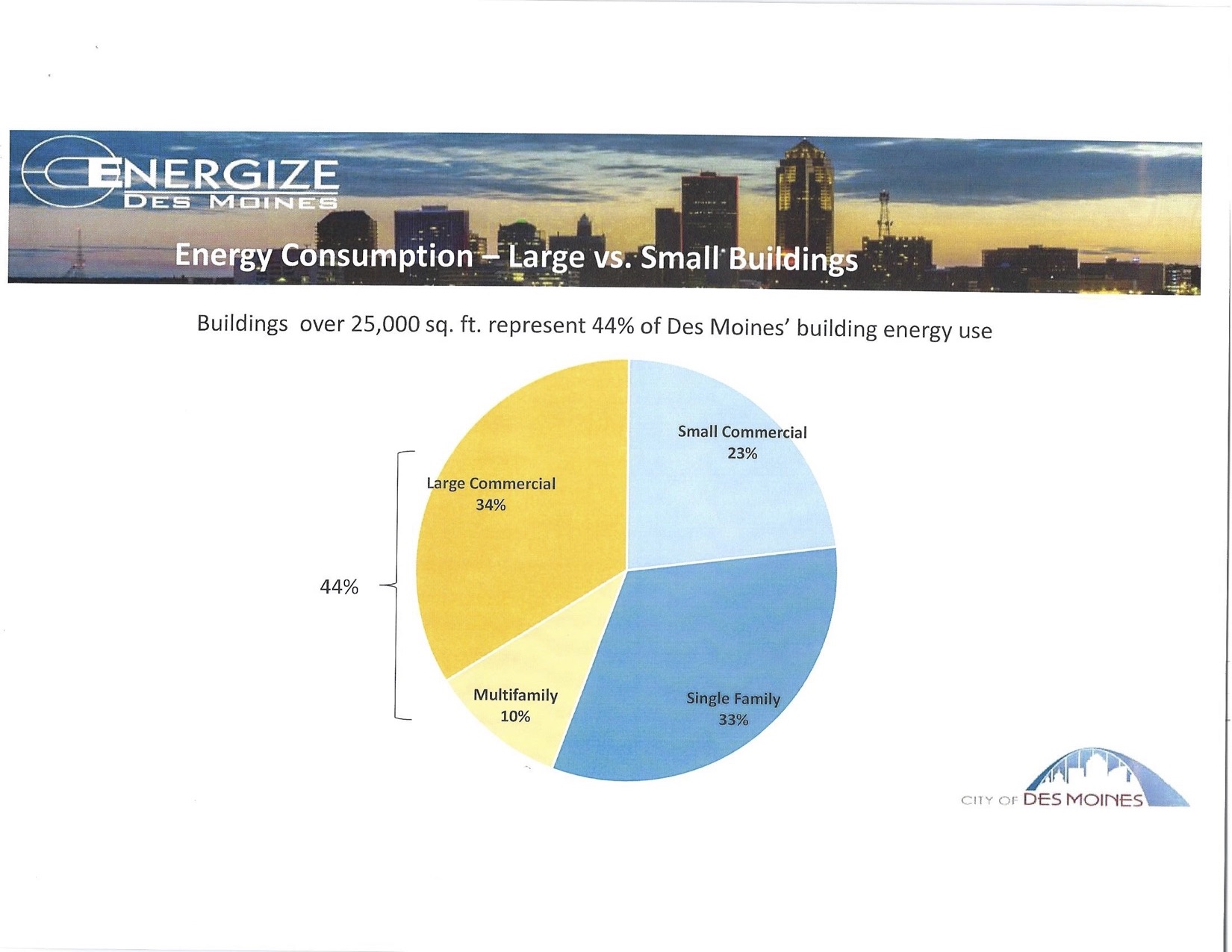 By addressing large buildings, the city can address a larger part of the problem within a smaller number of buildings – approximately 819 buildings in total. Cities such as Austin, Texas, Boulder, Colorado, San Francisco, and South Portland have set their thresholds at 10,000 sq. ft. (of which Des Moines has approximately 1,500+ buildings at or above). But of some 25 cities with similar benchmarking ordinances, most have set their threshold at the 25,000 to 50,000 sq.ft. range. So by targeting this 1.2 percent of buildings, Des Moines gets a bigger bite at the apple on reducing greenhouse gas emissions.

Of course, certain large building owners hate the idea that they might be held accountable for their energy use and be required to take action to improve their overall efficiency. Complaints range from the unfairness of targeting ONLY the large buildings, to the amount of time it’ll take to input the information into the database (two to three hours per month on average), to making the information transparent and publicly available as an effort to “shame” building owners, to the desire to be “incentivized” instead of “penalized,” to fears of eco-terrorists spray painting “Energy Hog” on their buildings. These come frequently from owners who were notified early on in the process but chose not to engage. If they had, they might have had more reassurance that many of their concerns had already been addressed.

Since we must start somewhere, the city is putting resources where the outcome will have the most impact: large buildings. It is by no means the end of the story. Eventually all buildings will need to track and reduce their energy and water consumption, but we have to begin somewhere. If one is a large building owner, congratulations. You get to be a leader in the community by giving back in the form of decreasing your usage.

The proposed ordinance has been weakened in other ways as well. Buildings will receive a score showing how they perform compared to similarly-sized structures across the country. The advisory committee initially recommended that Des Moines buildings be put on a path to improve their energy efficiency if the score was below the 75th percentile (a level indicating that the structure was using less energy than 75 percent of comparable buildings). Owners could have received advice from the city on the most cost-effective ways to bring the energy score up.

The current draft ordinance lowered the target score from the 75th percentile to the 50th percentile and removed any consequences for not meeting that standard. Large buildings in Des Moines would only have to measure their usage, with no required improvements, even if the score showed the building was using more energy than at least 50 percent of peers around the country.

As for “shaming” building owners, the ordinance would give them a year to develop a plan for addressing their energy use before making their aggregate building information available to the public. Frankly, if one is worried about being pilloried because one’s building isn’t as efficient as 50 percent of structures of similar size and use nationally, maybe they should be ashamed and do something about it.

But making the information public wasn’t intended as a way to shame anyone. Transparency is important to keep people honest. In addition, market forces can help consumers make informed decisions about where to rent. This data point allows competition, giving owners more incentive to invest in their buildings. Energy efficient buildings across the nation are increasingly garnering better rents, better tenants, and tenants who stay in place longer, because they know going in what their utility costs will be and can work that expense into their budget and/or business model.

Fear of targeting by eco-terrorists, even if that fear is genuine, seems disingenuous and hysterical. We live in a civil community, and offenders could be prosecuted under existing laws against vandalism. Again, if one’s building doesn’t even meet the efficiency of 50 percent of buildings of similar size and use, there’s a problem. Why aren’t you doing something about it? Energy efficiency improvements lower operating costs for building owners, so why not find out where one’s buildings stands and then look at where improvements can be made? We can’t manage what we don’t measure.

All we’re asking for at this point is to require measuring in order to identify which buildings are the leakiest, and where money can be most efficiently spent to lower city-wide greenhouse gas production. If we don’t know where we are, we can’t know how to move forward.

Finally, if building owners aren’t willing to spend two to three hours a month to secure a stable future for their children and grandchildren, what exactly ARE they willing to do?

I keep hearing how addressing climate change will take a Herculean effort of World War II proportions. Building owners and Des Moines Council Members keep stating that they believe something must be done on climate change. They agree it’s important, yet they don’t want to be the first ones asked to make a sacrifice, and they want taxpayer money to help them improve their buildings, from which they will privately profit.

I for one am tired of entitled business people who think they shouldn’t have to make changes for the benefit of the community – a community from which they take support and profit. If we accept the analogy to WWII, and climate change as the enemy, and understanding that buildings generally waste 30 percent of the energy/water they use, then what needs to be done becomes clear. Yet local leaders are more worried about offending building owners than about acting on the moral obligation to reduce our share of GHGs. Would leaders in the 1940s have sat around wringing their hands over how to incentivize citizens to assist the war effort? I kind of doubt it.

It’s time to acknowledge inefficient use as the waste and pollution that it really is and deal with it decisively. It’s time to act on reducing our energy and water use. We can’t do that if we don’t know how much we are actually using. This ordinance codifies that effort and is the first of many steps we must take to avert climate catastrophe and ensure a resilient state capital in the heartland. It is where we must start.

UPDATE from Laura Belin: According to Austin Cannon of the Des Moines Register, council members approved the ordinance on June 3 without the paragraphs numbered 1 and 2 here.

Short definition of benchmarking and why it matters:

Impact of buildings in Des Moines on greenhouse gas emissions and statistics about buildings of different sizes:

The economic benefits of building benchmarking: