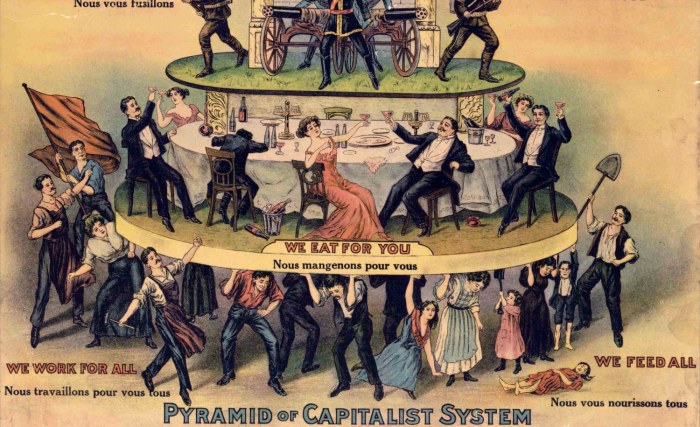 Socialism, along with its typically-juxtaposed companion, capitalism, are virile terms capable of inciting endless vitriol. Meaning countless different things to nigh-countless different people, these terms can singlehandedly turn friend against friend, neighbor against neighbor, and online threads ablaze like another of one of history's great fires.

However, if you wade into those frothing comments sections, you'll find more is similar than it appears. Most, if not all, of the systems and positions typically argued-for exist within the context of a society with formalized organization, a government, yet most of my fellow keyboard-tappers are oblivious to the true irony of the situation. For, in fact, the idea of a society itself is a collectivist notion which makes it kin to socialism, which also finds root in the collective.

The fundamental root of both socialism and society is "social". As one of the myriad of social species, human beings interact and form interdependent bonds, whether they want to or not. Those who are interdependent and often living in close proximity form the basis of society's fundamental units. Common examples of these units are families, clans, or tribes.

This interdependence - relying upon each other - is the foundation of ecology itself so it's no wonder it's also the foundation of society as well. This mechanism of living is primarily what allowed the development we've seen through history up to the modern day.

Formal societies as we understand them today go back at least ten millennia as humans transitioned from a nomadic, tribal hunter-gatherer lifestyle to a city-dwelling agrarian mode of living during the Neolithic Revolution. However the origins of those formal societies were derived from the tribal societies that far predated them.

In the natural world, humans are exceptional at only a scant few things. We're not the fastest or strongest, our skills rely mostly on endurance and intelligence. This evolution-enforced reliance on tool use only deepened our social needs, as most of our ability to use tools is not instinctive, but instructive - learned from watching and copying others.

Lacking extremely specialized senses - a mediocre sense of smell, limited range of hearing, moderate eyesight, as well as a very long developmental period required due to brain size, cooperation is and was required for human survival - especially that of early humans. What's more is that forming societies allows for specialization. Early humans had to typically be generalists in order to survive.

As our species grew, the dominance of generalists became counterproductive. While generalists are more flexible, they take much more time, energy, and resources to train, which also makes their potential loss more devastating. Specialization also allowed for previous heights to be reached as individuals could often now spend their lives dedicated to a specific arena, and later trade or craft, pushing the boundaries of the previous generations in terms of technological development and skill.

One can see the benefits of specialization very readily if one observes highly-social species, such as bees and ants. Together, the social organism - the society - makes up something more than the sum of its parts - a synergistic entity. These cooperative species work together and achieve much greater stability surviving than they would otherwise. Humans are no different in this regard, despite how often we try to separate ourselves from the rest of the natural world.

Hierarchies, for good or bad, develop due to many reasons in society, mostly around conflict and organization. Early on, most hunter-gatherer societies were fiercely egalitarian. This makes sense, a community of peers is most likely to result from this small-scale intimacy and survival mandate to work together or perish. Hierarchies seem to have developed only after city life began and agrarian production increased.

However, as specialization benefits society in terms of efficiency, it necessarily creates strengths and weaknesses for each type of specialization. Boundaries are often established by violence, and resources today are still often doled out via the barrel of a gun or wings of a drone. Classes focused on basic tool and commodity specializations were and are at a physical loss to the warrior/violent specializations that most societies developed and featured both for protection and internal repression.

Organizing can become very laborious as societies grow, often giving rise to administrative specialist classes who focused on helping direct the society to be efficient or respond to conflict and crisis. Over time, as the mindset changed from a cooperative to hierarchical one, administrators became rulers who believed they had the inherent right to control the society by virtue of birth, certain ability, and/or divine blessing. In charge of resource distribution, they also began directing increasingly larger shares of the collective production to themselves and those that supported them, further deepening the divide.

These ruling classes love collective society. It provides for their physical needs and even gives them importance due to the way they've influenced it. However, especially as societies grow, rulers can't enforce their will on their own, which gives rise to a need for subservient allies. They also need to maintain the obedience of the working classes while appearing friendly to them. Coupled together, these needs created the intermediate or middle classes.

Intermediate classes are given enhanced power and privilege, often a comfier life, from the lower classes in exchange for enforcing and maintaining the ruling paradigm. Their intermediacy also humanizes them more readily to the lower classes, as they were often, and sometimes are still, taken from them. Through history, eventually some of these subservient ally positions became peerages and nobilities, after which this humanization was lost for them.

A very common intermediate class type is the warrior classes who defended the society from both other societies (external) and civil unrest (internal) threatening the social order they're in service to. This middle position often develops its own tug of war with the rulership, which often realizes the true muscle of a society is whom holds force of arms. When unsatisfied with their power, this warrior class may lead a military coup, making either themselves or someone sympathetic to them the new rulership.

While often holding dominance in true, physical power of violence, the non-working, higher classes are very vulnerable to the lower, working classes. The old saying "an army marches on its stomach" holds true. Without basic needs and supplies, generally produced by the working classes, the classes above collapse for various reasons. So these systems can't exist and completely cut the working classes out.

These hierarchical systems are designed to extract as much obedience and production out of the working classes as possible, generally taking care to not take so much from them that revolt and revolution ensues. Pitchforks are best for the ruling classes when working the land, not at their throats, after all. This provides the root basis of classic sociopolitical divide regarding distribution - a spectrum between egalitarianism (equality) and monopolistic hierarchy (inequality).

Society exists as a collective or social entity. When the well-versed typically refer to socialism, they are referring to ideological or governmental implementations aspiring to increase society's egalitarian measure - typically socioeconomically. This is a significant difference from the definitions of true socialism and communism, in which the working classes control the tools, resources, and information necessary to produce, commonly known as the "means of production."

Regardless, because ruling and enforcing classes rely upon the working classes for survival, the system ultimately is forced to reckon with the true importance and power resting solely on the cooperation and production of the lower classes. Compromises must be struck. Those compromises are why most Western governments could be accurately described (to varying degrees) as socialistic capitalism, what economists often call a mixed or hybrid system. However socialism and collectivism are typically poorly understood by those in older generations, who were often subjected to large amounts of Cold War propaganda equating any egalitarianism with the USSR.

Many of the ideological shifts toward more socialistic preference in the post-Boomer generations, in particular the Millennials and after, are grounded in understanding the socioeconomic harm caused by the current severely concentrated, top-heavy distribution of wealth and resources across not only the West but the planet itself. We in these younger generations also understand this irony that society itself is collective. Remember the foundation of society? Interdependence. Resources and wealth concentration directly weaken society by changing interdependence into hierarchical dependence alone.

When the older generations conjure up the thought of collective or social-focused governments, they think of Soviet-type oligarchical autocracy or North Korean-style oppressive autocracy. The USSR and North Korea function not as the antithesis to "capitalist America" but its logical conclusion given concentration of power. In other words, it's the ultimate capitalist pipe dream.

Our generations, when thinking of socialism, think about many modern nations with mixed systems: Sweden, Norway, Denmark, Finland, Germany, Vietnam, Iceland, Chile, Argentina, Canada. Countries which produce happier, healthier, more-empowered, and better-compensated citizenry. At the same time, those countries are not socialist from a perspective of ideological socialism. Remember, they're socialistic capitalism. They're just introducing socialist mechanisms to rein in their capitalist foundations.

As previously discussed, the root of all societies exist within a collective and must have some socialistic mechanisms in place to assuage and maintain the working classes, which otherwise would be starved, beaten, and controlled into much less productive scenarios. Well-fed, rested workers produce much more than starved, overworked ones. As inequality and exploitation increase, there is a point in society where worker productivity drops. We are seeing less of this for now due to automation, but it's still coming.

There's a common phase used to illustrate the aforementioned classic power spectrum from egalitarian to monopolistic hierarchy. It goes as follows:

"If you have more than you need…"

In this metaphor, the egalitarian socialist argues everyone deserves a place at the table while food is hot and drink cold. In contrast, the hierarchical capitalist argues those who provided for them should only be let in to swill up the scraps from the table. In this discussion, however, it makes little difference.

While this niche perspective of inherently socialist collective might throw many established thinkers and ideologues for a loop, it's irrefutably true that as long as a society exists, it exists to varying degrees with logically-necessary socialist requirements for existence and maintenance.

As long as the higher classes want commodities and luxuries (that they don't have to make themselves), they'll have to open the fence gate and give a place at the table to those who are actually providing for them. What is generally being argued for in those comments sections is truly the question of how full the lower classes' plates deserve to be at the table.

So when those internet arguments rear their ugly heads again, it's useful to remember what most are truly arguing for and against, and perhaps, what one should be arguing. A little perspective can do wonders for changing the appearance of the world around. Admittedly, I believe everyone deserves an equal place at the table.

Gwen is a queer trans woman in her mid-20s who was born and raised in central Iowa. A diverse generalist, Gwen's passion lies in speaking, writing, community education, and activism. One can find her periodically speaking at various local community colleges.