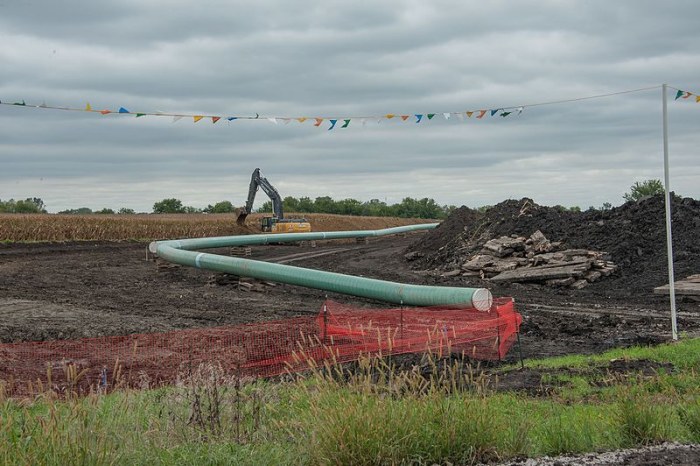 Ed Fallon: We must not let this latest attempt to threaten our water, land, property rights and planet go unchallenged. -promoted by Laura Belin

As predicted, Dakota Access announced on June 12 that it wants to increase the amount of oil flowing through its pipeline across Iowa. The company claims it needs no additional authorization from the Iowa Utilities Board (IUB) to proceed.

Bold Iowa disagrees. Today, we filed the following request with the IUB. We need YOU to take action, too. Here’s our five-step action request, which should take you about half an hour. It’s important, and your voice is needed NOW!

3. Submit your own filing to the IUB and demand a public hearing.

4. Ask one other person to do the same — let’s broaden our outreach!

5. Make a donation to support our work.

Dear Board Members and Staff:

DA’s filing raises so many unanswered questions it is not possible for Bold Iowa, the general public, the IUB, nor concerned state and local elected officials to fully grasp the impact of the proposed expansion without adequate time and study. The involvement of landowners along the route, Story County residents, and all Iowans concerned about the broader impacts of the pipeline is essential. Thus:

Bold Iowa requests that the IUB hold a public hearing in Story County where DA officials and IUB representatives are available to answer any and all questions from Iowans who have concerns about DA’s proposed expansion.

Our staff and consultants have had less than 24 hours to review DA’s filing. Many more issues will likely arise. At this point, here are the questions and concerns we would like the IUB and DA to address:

1. How much oil would flow through the pipeline once DA completes the proposed changes at the Cambridge Pumping Station?

2. What would be the proposed expansion’s impact on climate change? (Note page 37 of the recent Iowa Supreme Court ruling in Puntenney v. Iowa Utilities Board, where Justice Mansfield in writing for the majority states, “We recognize that a serious and warranted concern about climate change underlies some of the opposition to the Dakota Access pipeline.”

3. Would the additional flow of oil increase the likelihood and severity of a spill?

4. What types of disruption and impact could landowners near the Cambridge Pumping Station expect during and after DA’s proposed expansion?

5. Beyond modifications to the Cambridge Pumping Station, is DA considering adding other pumping stations in Iowa and/or other modifications at any other points along the pipeline route now or in the future?

6. DA references growing demand from shippers. How much of that demand is from overseas markets? We are concerned that, given the recent announcement about opening an office in Beijing, China, by DA’s parent company, Energy Transfer Partners, this proposed expansion has nothing to do with domestic oil consumption and everything to do with exportation.

7. Would DA have to add more Drag Reducing Agent (DRA) to accommodate the increased flow through the pipeline, and if so, would that constitute a change to the essential product, thus requiring DA to get approval from the IUB according to Rule 13.18?

8. DA indicates that one justification for the proposed expansion is that shippers have expressed “significant interest.” How many of these shippers are simply marketing affiliates of the company and/or any of its parent companies?

9. When would DA intend to begin and complete the proposed work?

10. How would DA intend to keep the public informed of its progress?

Thank you for your prompt consideration of our request.