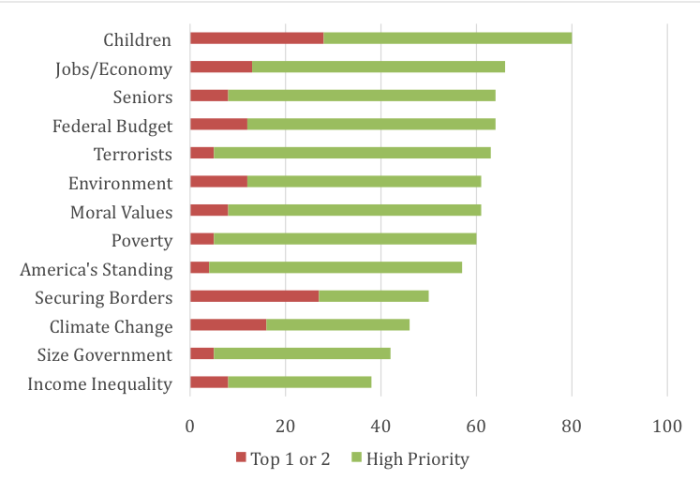 Coming of age: Children's issues and the 2020 election

Charles Bruner has been involved with the Children’s Policy Coalition over the last three decades and led in the design of both the 2015 and 2019 Iowa Voter Survey conducted by Selzer & Co. -promoted by Laura Belin

For the first time in our country’s history, children face the prospect of growing up less healthy, living shorter lives, and being less prepared to compete and lead in a world economy.

This is not a matter of a few children. One-fifth of America’s kids are struggling and already face sober futures; another one-third definitely are not doing as well as they could to prepare themselves to be adults. These statistics hold even if we are able to address global climate change and its adverse impacts.

The issues facing children and their families are complex, but they will not be addressed without public dialogue and action. Fortunately, a poll sponsored by the Children’s Policy Coalition (conducted by Selzer & Company) shows that Iowa voters are concerned about kids issues – and candidates would do well to take note and develop policy agendas that address their needs.

Many polls conducted by issue organizations focus on just their own particular issue, but the Selzer & Company poll asked for voters’ views on a wide range of issues, with children only one of those. Further, it asked voters first whether each issue was a high priority issue to them and then asked voters to select their top one or two issues from the list. Finally, it asked voters which party they thought would do a better job of addressing the issue.

Children’s Ranking as a Priority Issue. On the topline question of what issues were of high priority to voters, “ensuring the health, education, and well-being of children” topped the twelve other issues presented with 80 percent of voters, 12 percentage points ahead of the next issue (“creating jobs and building the economy”). Not only did it top the list in terms of high priority, but it topped the list when voters were asked to select their one or two top priorities. The percentage of voters ranking each issue by both a high priority and by one or two most important issues is shown in Chart 1.

CHART 1: PRIORITY OF ISSUES FOR THE NEXT PRESIDENT TO ADDRESS
QUESTION 1. I’m going to mention some issues facing our country. For each, I’d like you to tell me how important you think it is for the next president to address – high priority, medium priority, or low priority. (Results shown rank issues by percentage saying either “top 1 or 2” or “high priority.”) 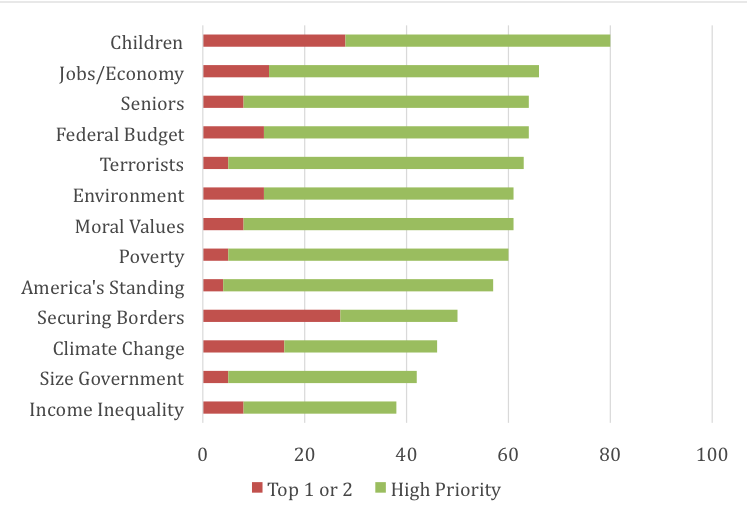 Overall, the entire line (green and red together) represents those stating the issue as a high priority.

More than one in four voters (28 percent) selected children as one of their top one or two priorities. Except for securing America’s borders and addressing climate change (both of which were ranked as a top priority almost entirely within one party – and likely therefore mobilizing issues for the party base rather than appeals to the broader electorate), this ranking was more than double the percentage for the next highest ranked top priority issue (jobs and the economy at 13 percent and balancing the budget and protecting the environment at 12 percent each).

Child Policy and Voter Party Affiliation. Of those polled, 30 percent said they considered themselves Democrats, 31 percent Republicans, 32 percent independents, 1 percent other, and 6 percent not sure or refused. Further analysis of the poll by party affiliation showed all three party affiliation groups scored children’s issues positively, with Democrats the most positive, followed by independents, and then Republicans.

Chart 2 shows a comparison of voter responses by party affiliation on child policy compared with six other issues (not shown, for reasons of readability, are responses to issues viewed as less important overall). 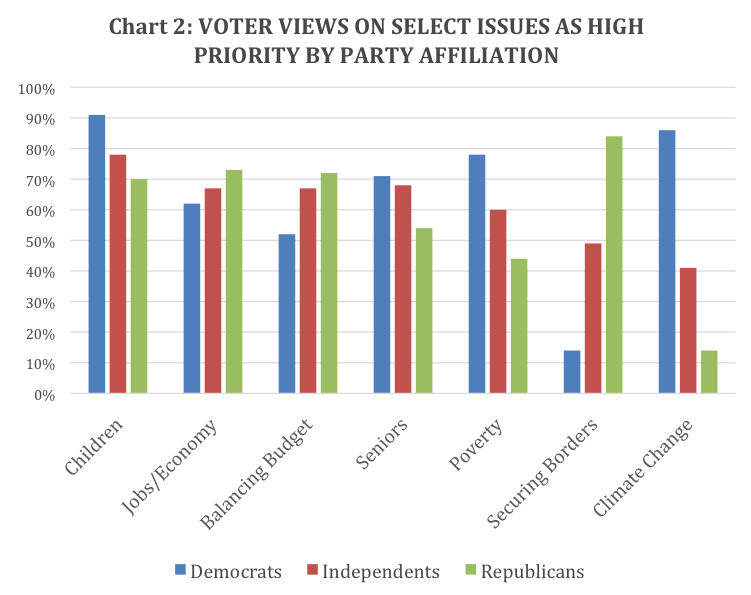 Alternatively, securing borders and addressing climate change are viewed in highly partisan ways as to their importance, but in both instances fewer than half of independents ranked them as a high priority, and they ranked them well below each of the other five issues showed in Chart 3. While there may be gains in appealing to the party’s base for Republicans to stress securing America’s borders and for Democrats to stress climate change, there are other issues of greater concern to independents (and therefore more persuadable voters) than these two issues.

Independent Voter Views on Party Preference by Issue. A further question asked all those polled was which party they thought would do a better job at addressing each of these policy issues. Those identifying as Democrats tended to say Democrats on most issues, while Republicans tended to say Republican.

Independents, however, varied substantially by issue. On child policy issues, the poll showed that Democrats are given the nod over Republicans among independents (54 percent to 23 percent), but 22 percent said both, neither, or they haven’t decided. As Chart 3 shows, this is both one of the areas of greatest concern for independents (78 percent ranked it as a high priority), and one where Democrats have the most marked edge. This has implications well beyond the primary election. 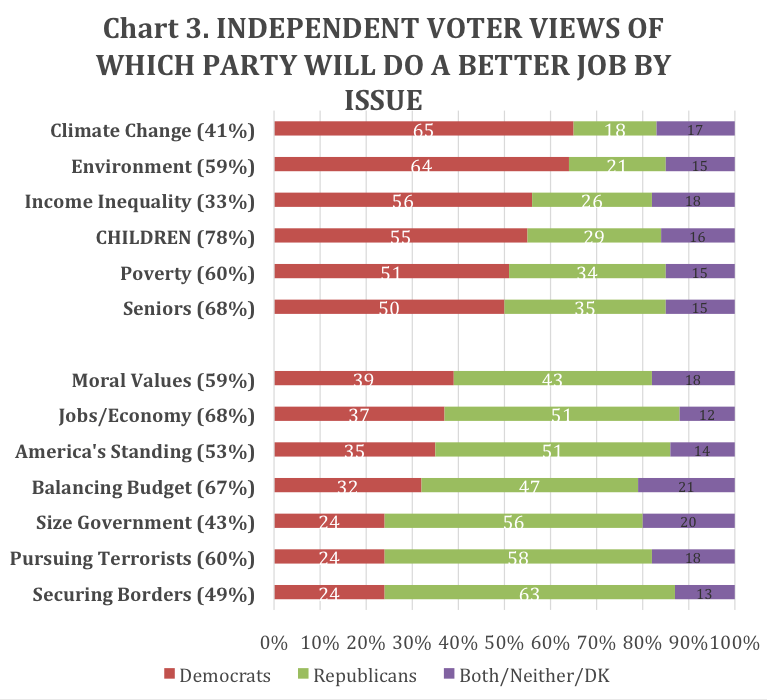 Note: percentage in parenthesis after issue definition is the percentage of independents who view this issue as one of high priority.

Conclusion. These tables and this analysis only share a small part of the overall poll, which goes into more depth on voter views on a range of specific child policy concerns. The full tabulations (along with a comparison on some questions with poll results in 2015) can be downloaded here.

The Selzer poll suggests that candidates would do well to pay greater attention to child policy issues and concerns and frame messages and share policy platforms on them. This applies to both Democratic and Republican candidates, and there is a lot to draw from the Selzer poll in terms of messaging and opportunity to respond to voter concerns, as well as to advance policy.

About the author: Charles Bruner holds a Ph.D. from Stanford University in political science and has taught college and graduate-level courses in American politics and policy analysis. He served 12 years as a state legislator in Iowa before founding the Child and Family Policy Center in 1990, whose mission has been to link research and policy on issues vital to children and families. He has been involved with the Children’s Policy Coalition over the last three decades and led in the design of both the 2015 and 2019 Iowa Voter Survey conducted by Selzer & Co. He can be contacted at: Bruner@childequity.org

About the Poll: Selzer & Company, Iowa’s leading and nationally recognized polling firm, polled 500 registered Iowa voters who participated in at least one of the past two general elections (2016 and/or 2018) in May, 2019, to discern how important voters felt different policy issues were in the 2020 election. The poll was commissioned by Every Child Matters for a broad-based Caucus for Kids campaign of the Children’s Policy Coalition in Iowa. Interviews were conducted by telephone, and responses were weighted by age, sex, and congressional district to conform to the proportions found among all Iowa registered voters in those two general elections. The poll was very similar to a 2015 poll also conducted by Selzer & Company around the 2016 election, allowing some comparisons on where voters stand today compared with four years ago.