An error of judgment

Apologizing for this poorly-conceived protest was the right decision. Many people who attended events in Ankeny and Cedar Rapids were upset by the symbolism. -promoted by Laura Belin

This past weekend, Bold Iowa held an action intended to dramatize the severity of the climate crisis. Our inspiration came from students in Germany, who stood on melting blocks of ice in a gallows with nooses around their necks.

Our message — As the Arctic melts, the climate noose tightens — was well received by many. Yet we inadvertently hurt some individuals whom we had hoped to inspire, either because the image of the noose raised the specter of lynchings or because it kindled sadness over a loved one who died of suicide by hanging.

To everyone who felt offended by the imagery of the noose, I extend a sincere apology. We knew our action would be edgy and provocative. Yet after numerous conversations with Des Moines allies (both Black and White) we thought the power of our message would come through clearly, despite that. We miscalculated, and I accept full responsibility for that error of judgment.

I greatly appreciate both Dedric Doolin with the NAACP of Cedar Rapids and Renee Kooker (who confronted us during the action in Cedar Rapids) for reaching out to me. They have helped create an opportunity for reconciliation and future collaborations, and I hope we might move forward on the possibility of holding a forum about race and climate.

Others offended by the action have also been amenable to civil discourse about why they found it hurtful. Again, thank you.

What has not been helpful is name-calling and derogatory assumptions about those of us involved with the action. Particularly disturbing is being told that we are racists.

Hardly. One of our participants, Pascha Morgan, is a Black man who is passionate about justice. In response to the crisis at the border, Pascha is organizing a 1,200-mile march from Des Moines to south Texas. It’s called the March Against Detaining Asylum-seeking Families (MAD-AF).

Another participant, Frankie Meeink, is nationally recognized for his work at improving race relations. Frankie has written four books on the subject, including Autobiography of a Recovering Skinhead. His life is committed to tolerance, diversity and mutual understanding in racial, political, and all aspects of society.

Dr. Maureen McCue has been a tireless fighter for peace and justice for three decades. She is a key spokesperson for Iowa Physicians for Social Responsibility.

For me, as a state lawmaker I represented the most racially diverse district in Iowa. The concerns and struggles of my neighbors, most of whom were non-White, were high priorities in my work as a lawmaker, and remain so today.

Regardless whether you were impressed with or offended by Bold Iowa’s action, I ask that you take our message very seriously. The climate crisis is accelerating more rapidly than nearly anyone predicted. This summer in the Arctic and Greenland, ice, snow, and permafrost are melting at an unprecedented and alarming rate.

Unless we act quickly and decisively, humanity faces the risk of extinction. The overriding imperative is to wean ourselves off fossil fuels as quickly and completely as possible. That is why the other part of our message was a plea to presidential candidates: Will our survival be your first act as president?

If the next president isn’t committed to launching a full-scale climate mobilization on Day One of their administration, it may be too late to head off extinction.

Since January, Bold Iowa has pleaded with and pressured candidates, the media, and voters to treat the climate crisis with the urgency demanded. We’ll continue to do so through the Iowa caucuses, yet we’ll be more judicious as we take away a valuable lesson from the poor choice of imagery during our action this past week.

Ed Fallon is the director of Bold Iowa and hosts a weekly talk show, the Fallon Forum, on four Iowa radio stations. He served as a state representative from 1993-2006. 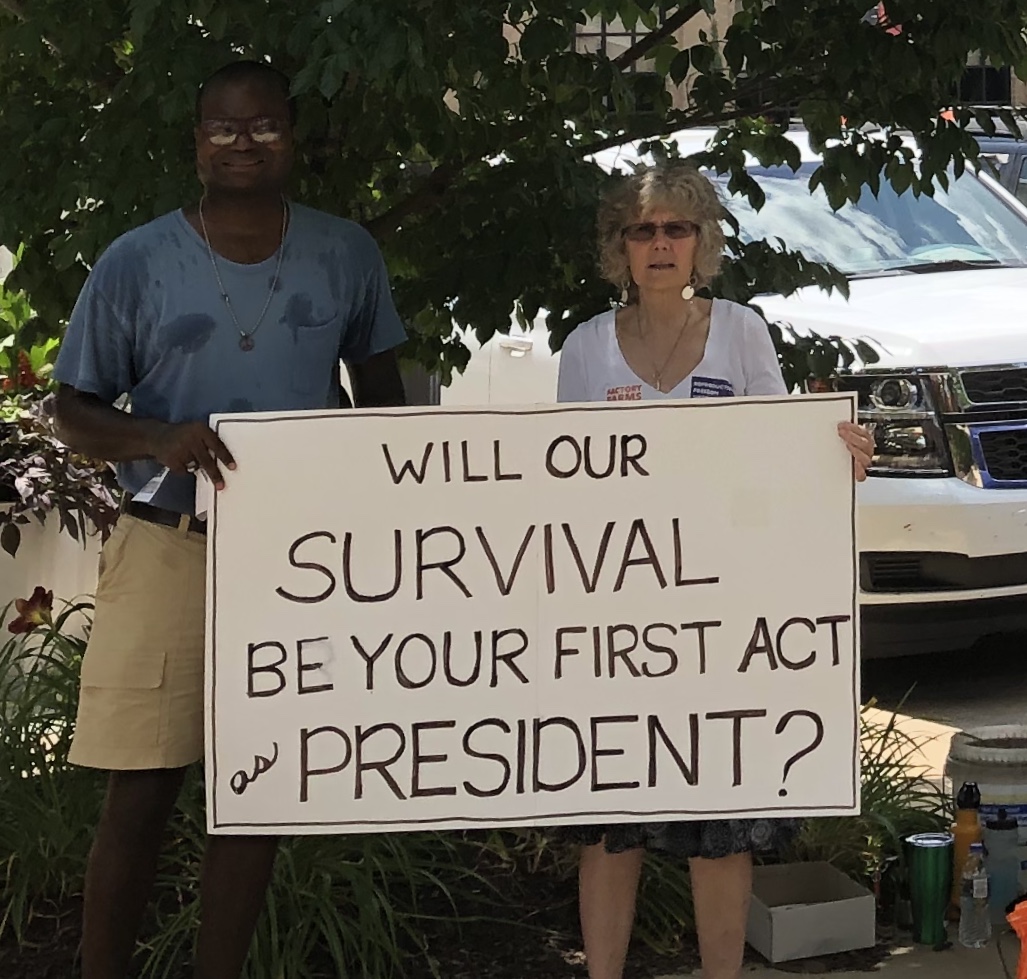