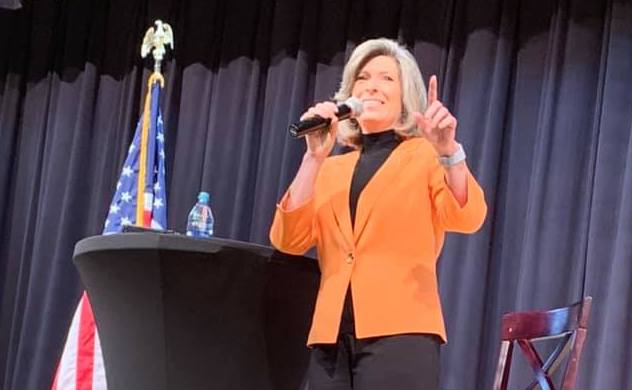 Joni Ernst needs to act on the Violence Against Women Act

Lesli Nesmith found that Senator Joni Ernst has little to show for repeated promises to move forward on one of her stated priorities: reauthorizing the Violence Against Women Act. -promoted by Laura Belin

Congress enacted the Violence Against Women Act (VAWA) in 1994 as part of a large crime bill. The law created a system to provide support and programs for victims of sexual assault and domestic violence, as well as a framework of legal enforcement against perpetrators.

In the ensuing 25 years, VAWA has been strengthened and expanded, as policy-makers recognized gaps in the law and changing societal needs. Sadly, this legislation fell victim to the budget battles of late 2018 and lapsed without reauthorization by Congress in December.

The U.S. House has done its part to rectify this by passing a reauthorization of the act in April, with some Republican support. The updated bill would strengthen a number of existing programs and seeks to close the “boyfriend loophole” to include banning all intimate partners who have been convicted of domestic abuse or stalking from purchasing a firearm. Earlier versions of VAWA restricted firearm purchases only to individuals who were “married to, lived with, or have a child with the victim.”

The Senate version has yet to take shape. Iowa’s own Senator Joni Ernst could be doing more to move it forward.

Ernst has repeatedly spoken about importance of this legislation. She told reporters in January of this year, “I will always continue to work with survivors and provide them the best possible resources I can.” She also promised to use her new role on the Senate Judiciary Committee “to get the Violence Against Women Act reauthorized.”

As recently as March, she again signaled her commitment, tweeting,

The Violence Against Women Act (VAWA) provides desperately needed resources for programs that tackle domestic & sexual abuse in our communities. However, Congress let this key bill expire. We must work together to reauthorize this critical piece of legislation.

That’s why I’m working closely with my Democratic colleague, @SenFeinstein, to modernize VAWA to fit the needs of our communities today. I’m committed to finding a truly bipartisan bill that will ensure that these critical services go to women who are desperately in need.

Despite those comments, it appears Ernst’s actions may speak louder than her words. Repeated contacts with staff in her Iowa and Washington, DC offices to determine progress towards the introduction of a Senate version of the Violence Against Women Act have been met with generalities and platitudes. A recent inquiry resulted in being passed from one staffer to another over several weeks, before finally receiving a generic reply from Ernst’s Iowa communications director.

The response bore a striking resemblance to Ernst’s tweet from more than five months ago.

Senator Ernst and Senator Feinstein are continuing discussions on bipartisan legislation. The Senator feels strongly that it’s important Congress gets this right and the legislation best suits the needs of survivors and our communities. Senator Ernst does not support the bill that was passed in the House, which included a number of partisan provisions that don’t reflect what VAWA was meant to be. The Senator is committed to lifting up survivors and getting the legislation introduced and passed as soon as possible.

Given her earlier statements, one must question why Ernst, a member of the Senate Judiciary Committee, isn’t pushing harder for speedy reauthorization of the legislation she says is so vital.

One noteworthy possibility: the National Rifle Association opposes provisions in the House version of VAWA. The key sticking point for the country’s most influential pro-gun group: the bill would expand restrictions on firearms purchases for those convicted of domestic abuse, which includes dating partners. Ernst has received an “A” rating from the NRA and has benefited from considerable campaign contributions and spending by that organization. Is the lack of progress on this reauthorization impacted by Ernst’s deference to the NRA?

It is time for Ernst to move forward with a sense of urgency, beyond “continuing discussions” toward action rather than lip service to the importance of this legislation.

Lesli Nesmith is a recent retiree who has been promoting progressive policies and candidates as part of the Eastside Huddle in Cedar Rapids since 2017.

Top image: Senator Joni Ernst speaks at a town hall meeting in Johnston on August 17, 2019. Cropped from a photo by Ruth Thompson and published with permission.