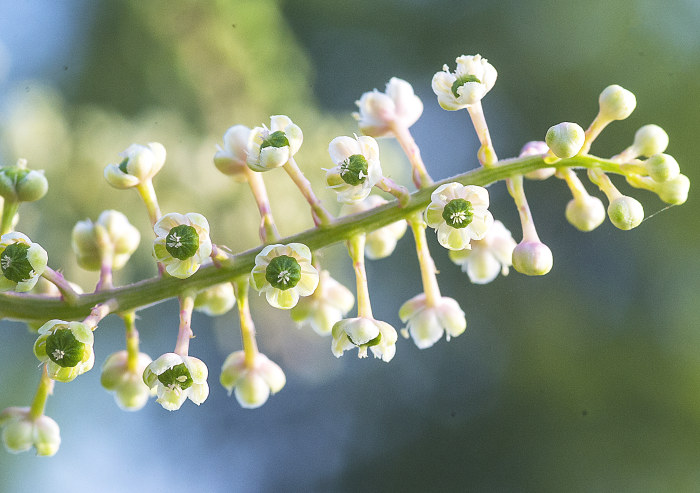 Poke is a native plant found in most of the Midwest, South and Northeast (per BONAP.net) and now found almost all over the U.S. Yet many urban people see it too rarely to identify it, much less use it. It grows in any good soil — oak woodlands, forest edges, pastures and, most especially, in fence rows and disturbed but unused areas. It also pops up in parks and urban yards and gardens.

Let’s look at its life cycle to help identify it. One day in May, there it will be – a tender, green, bright, fast growing tender green shoot amid your flowers, usually near where birds hang out. At this stage, you can eat it or pull it up…later you won’t be doing either one. 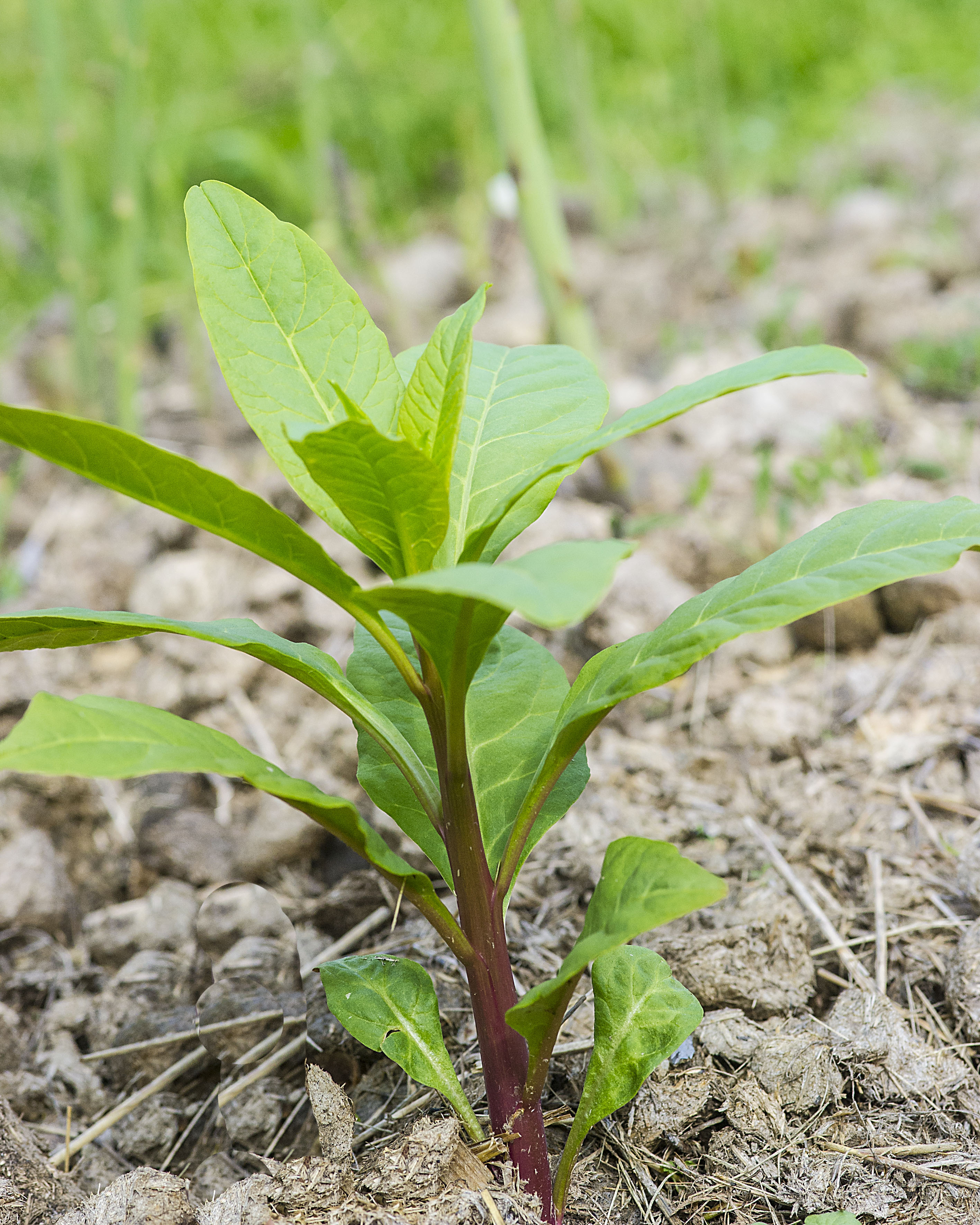 A month later, it is 2 or 3 feet high and putting on its first tiny flower stalks though the stems are usually still quite green and tender looking. 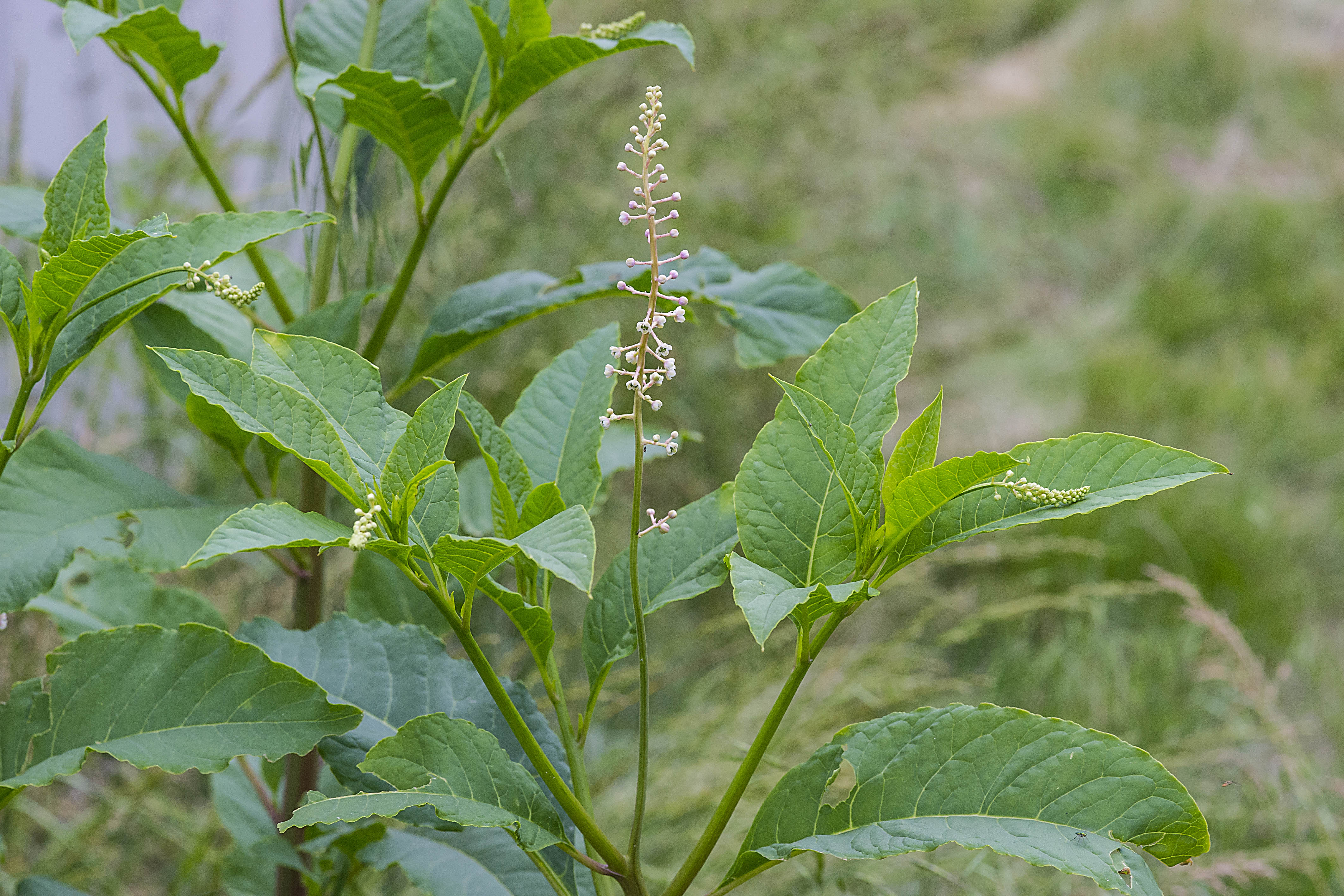 About the end of June, it is speeding up, growing taller. It is in full bloom, with hints of red where the leaves join the stem. 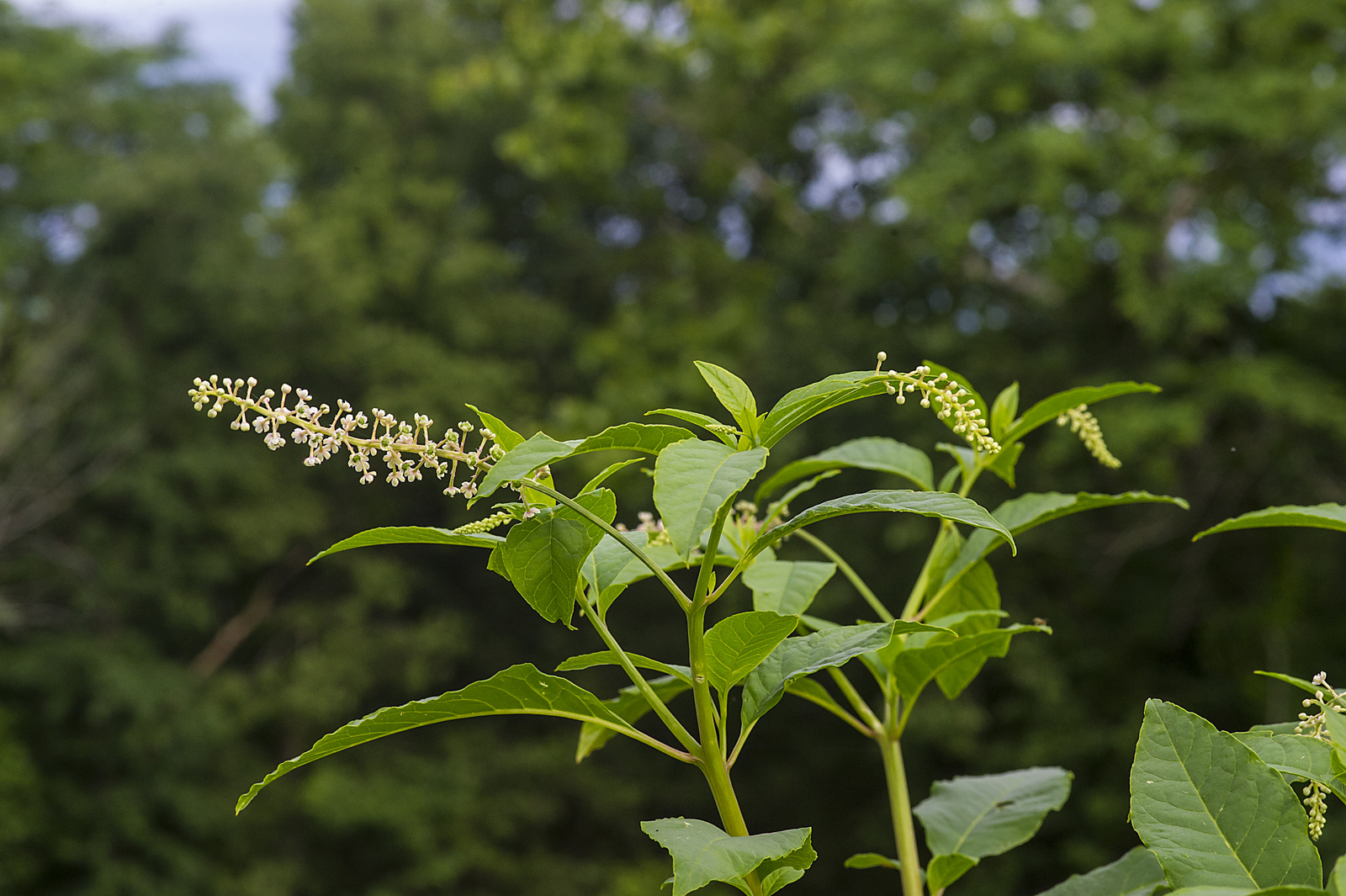 The blossoms, examined closely, are quite interesting. There are tiny green berries already showing within the five waxy white sepals along the stem. 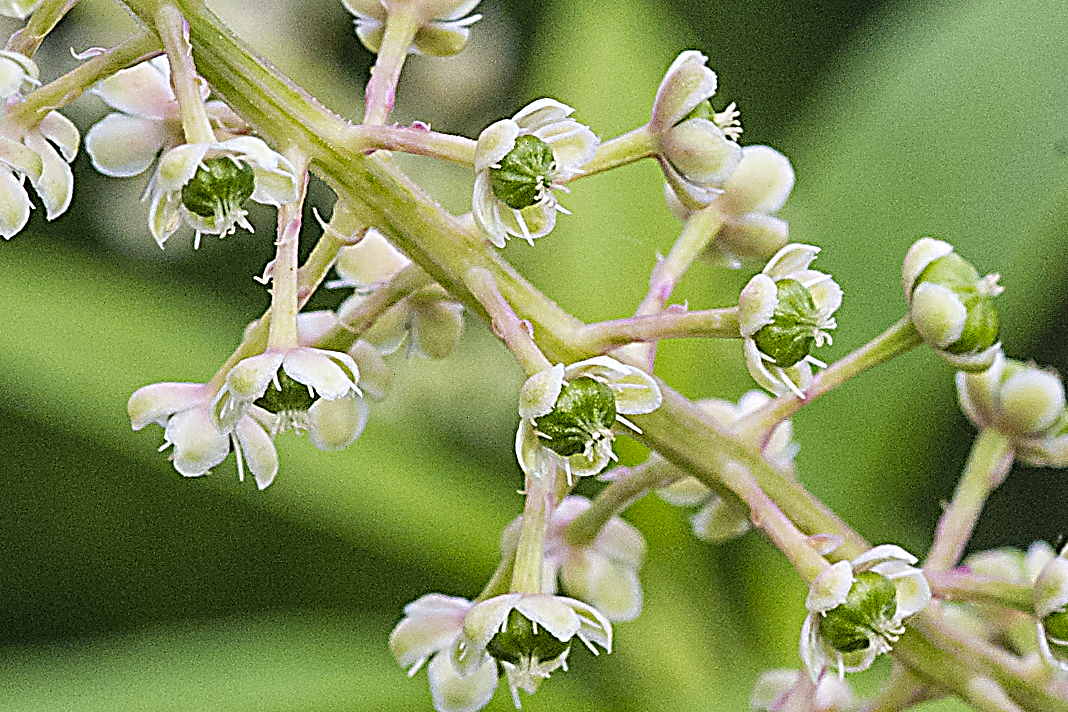 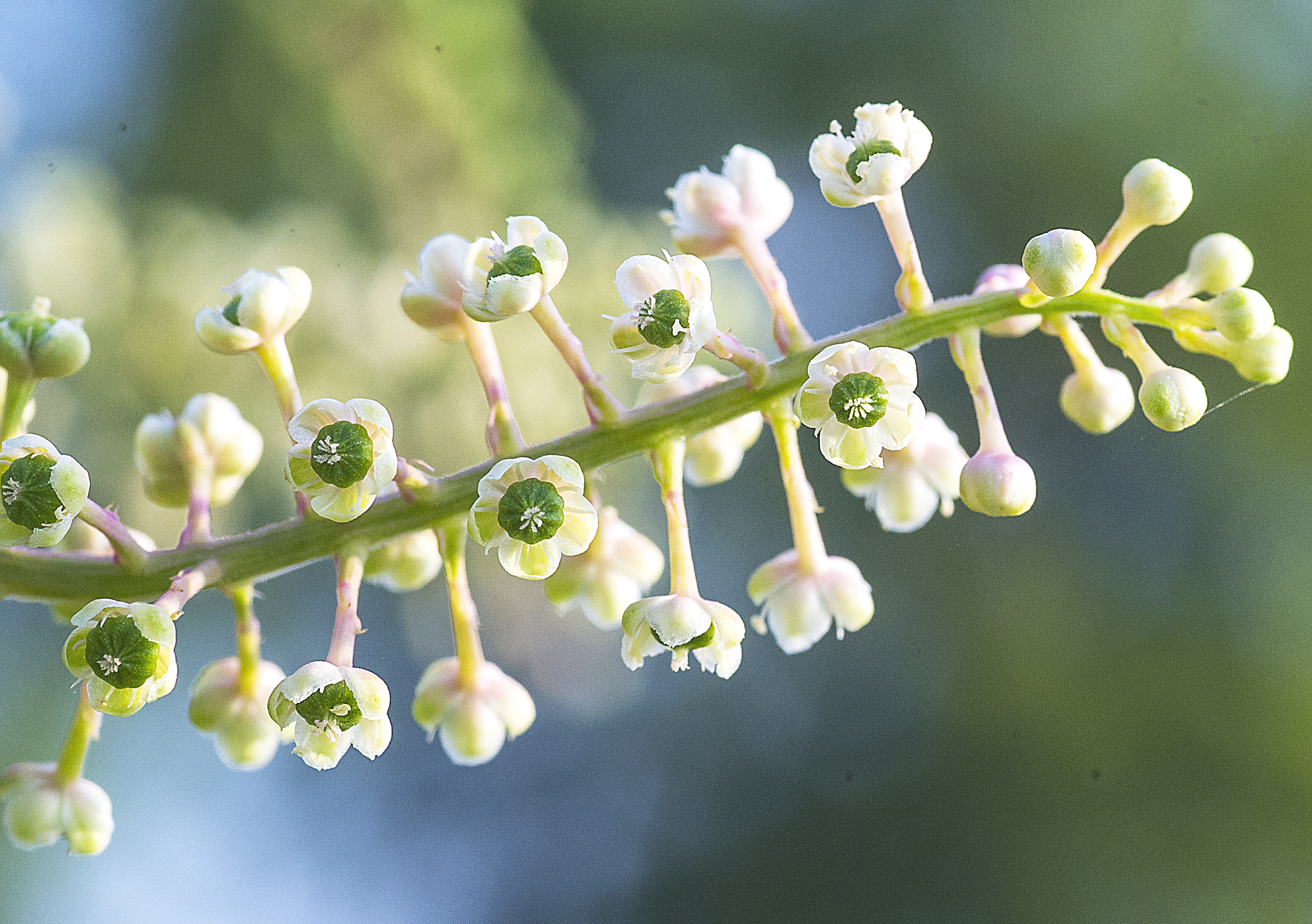 A stem will often have undeveloped buds at the tip, blossoms with tiny berries mid-way and berries where the sepals have fallen, all on the same flower stem. 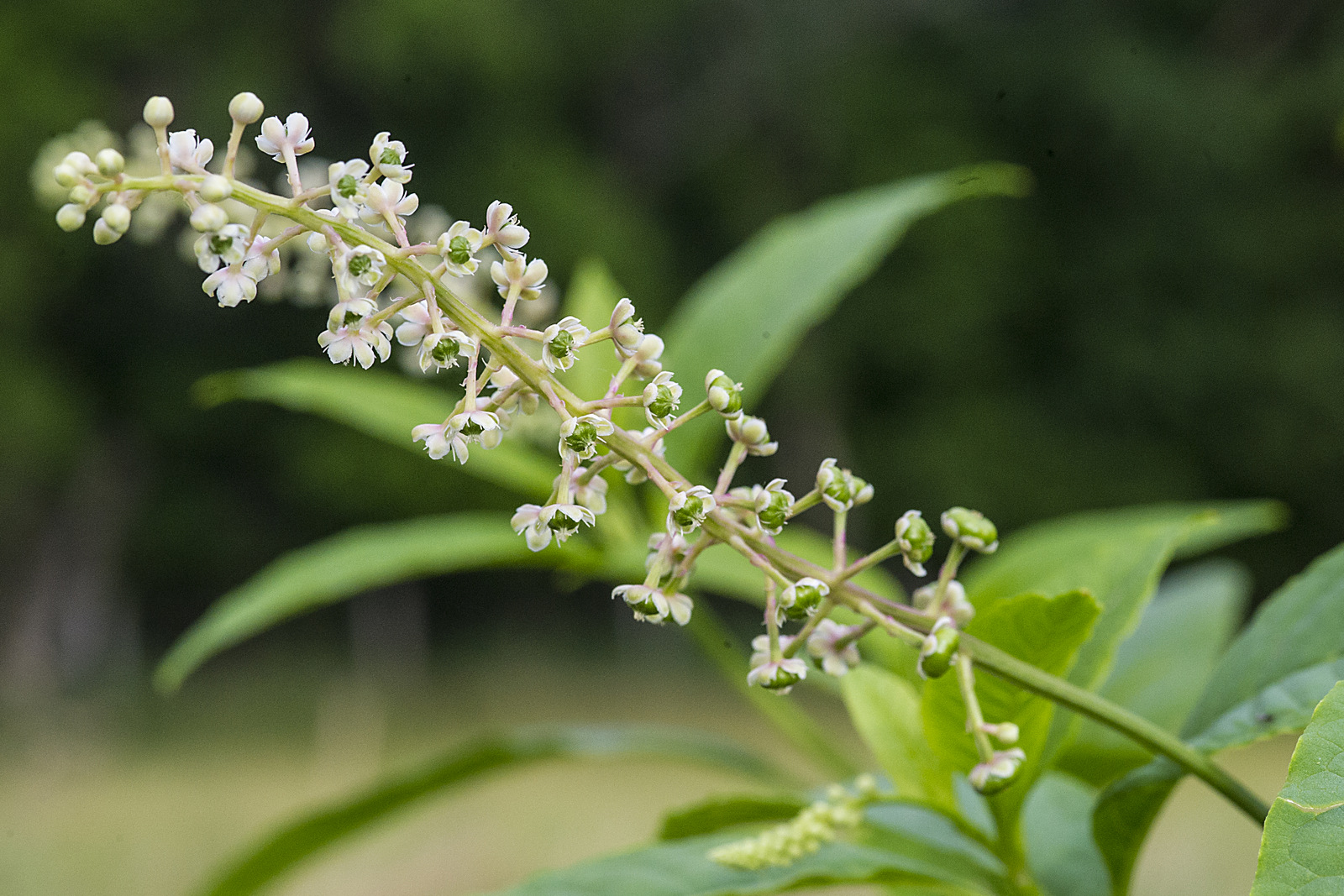 With summer heat and some rainfall, by early to mid July, Poke is a huge plant. It can be 6 or 8 feet tall, with multiple branches having buds, blossoms and berries. Now the stalk is deep red as are some side branches and the veins in the leaves. 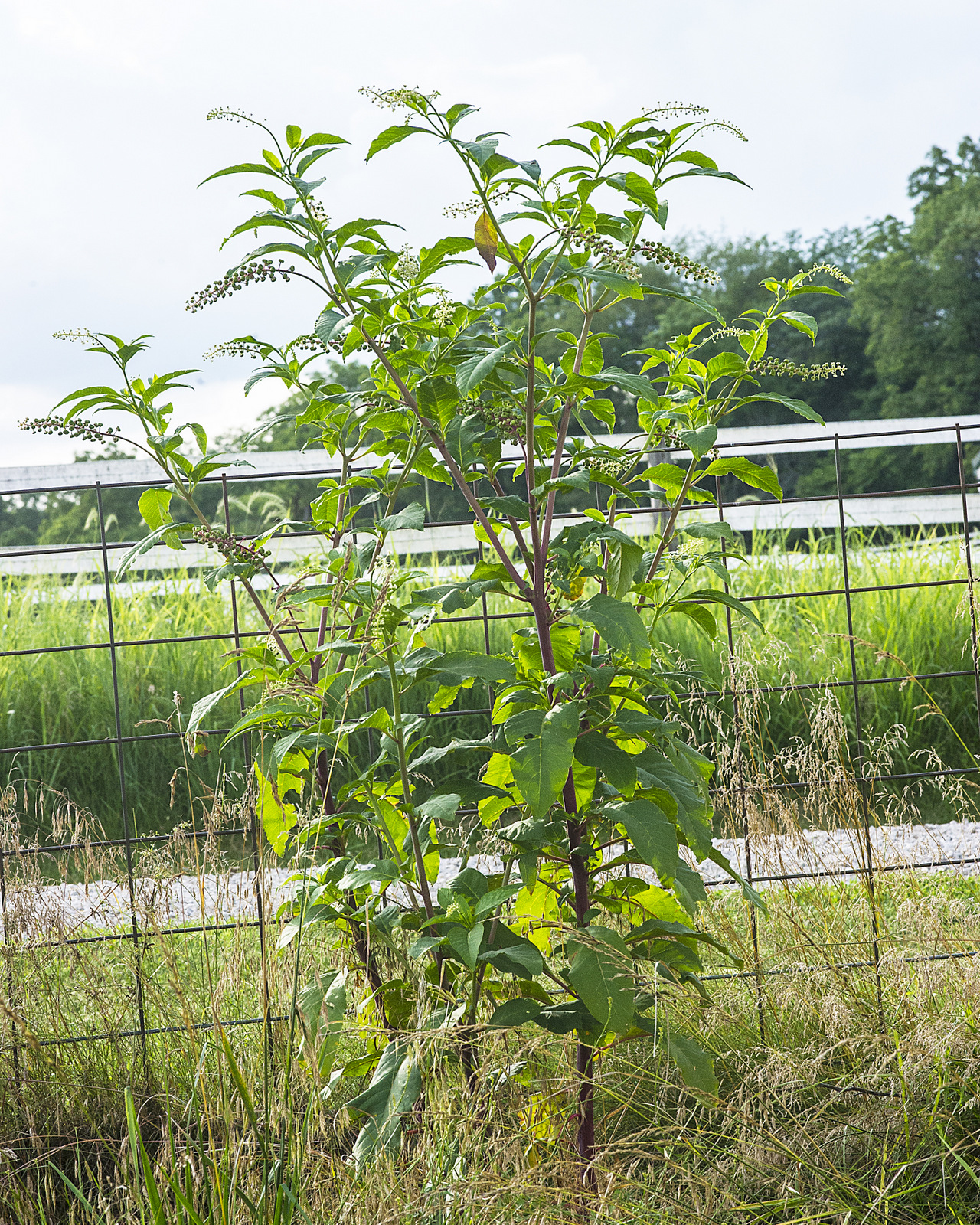 Yet, ever prolific, polk will still have stems with buds, flowers and berries yet to form on the ends of the side branches. 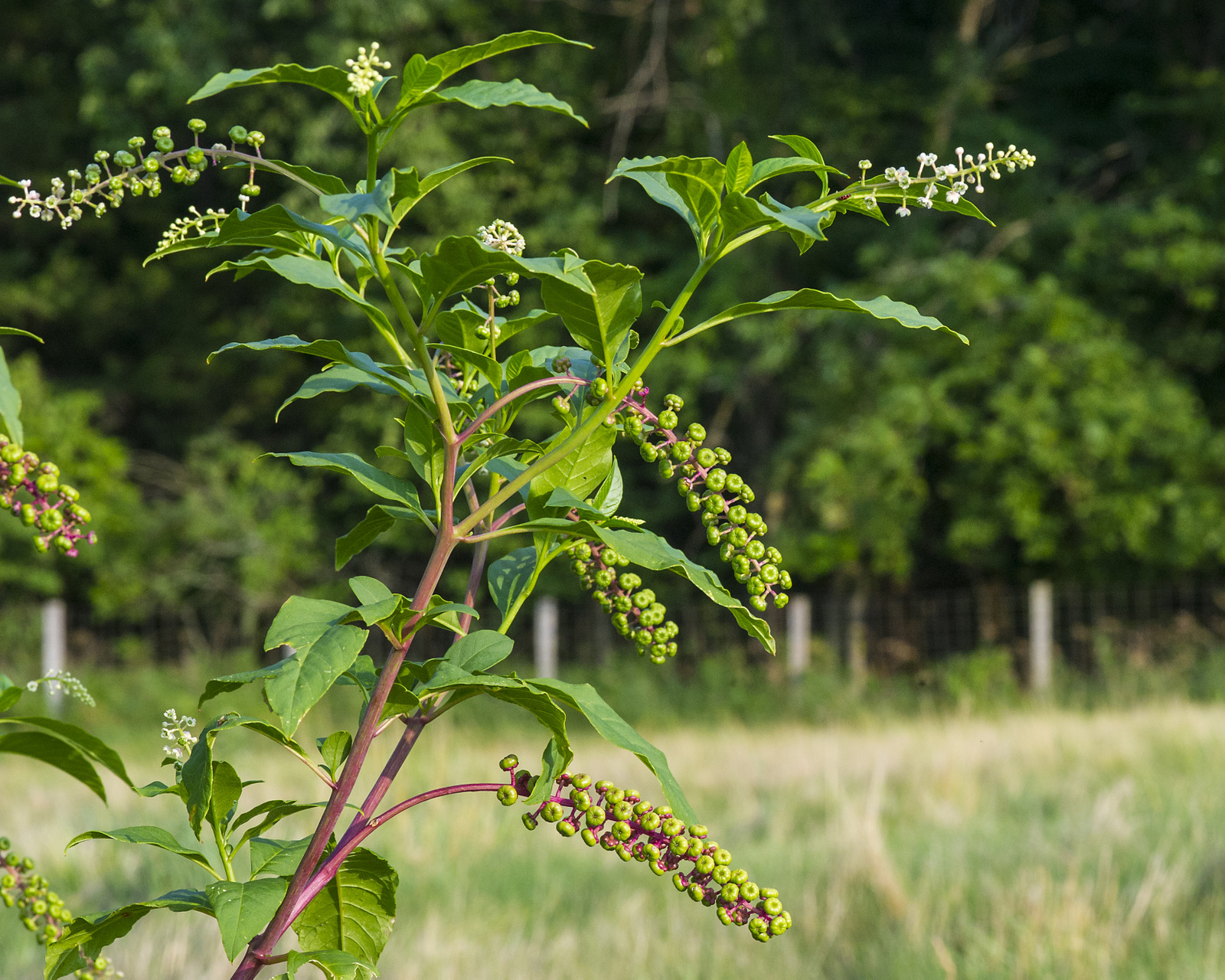 Why is the red significant? Because that is where the poison develops. But it is lovely. Note the red contrasting with the green berries at this stage. 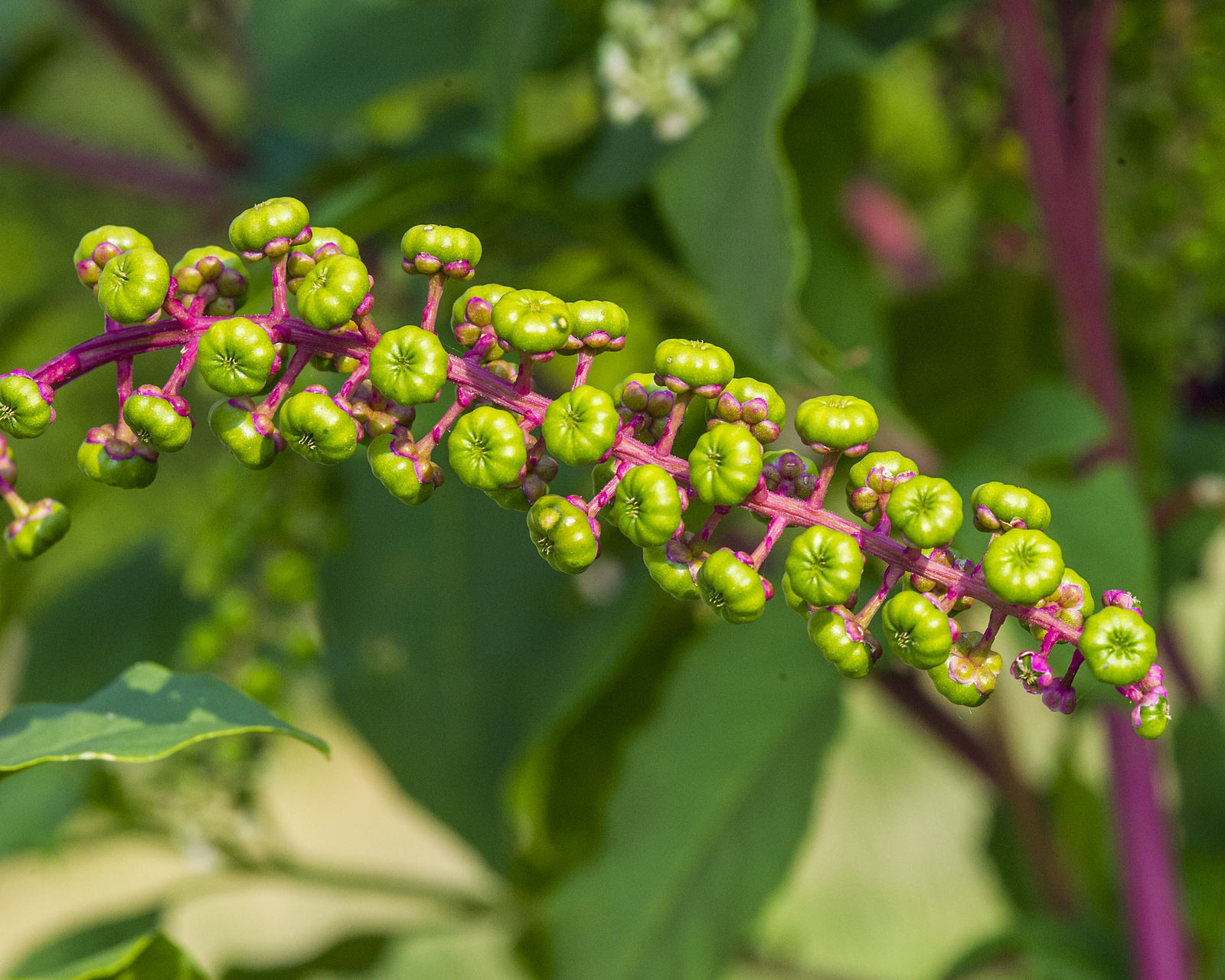 By August the overall plant is a colorful Christmas red and green. 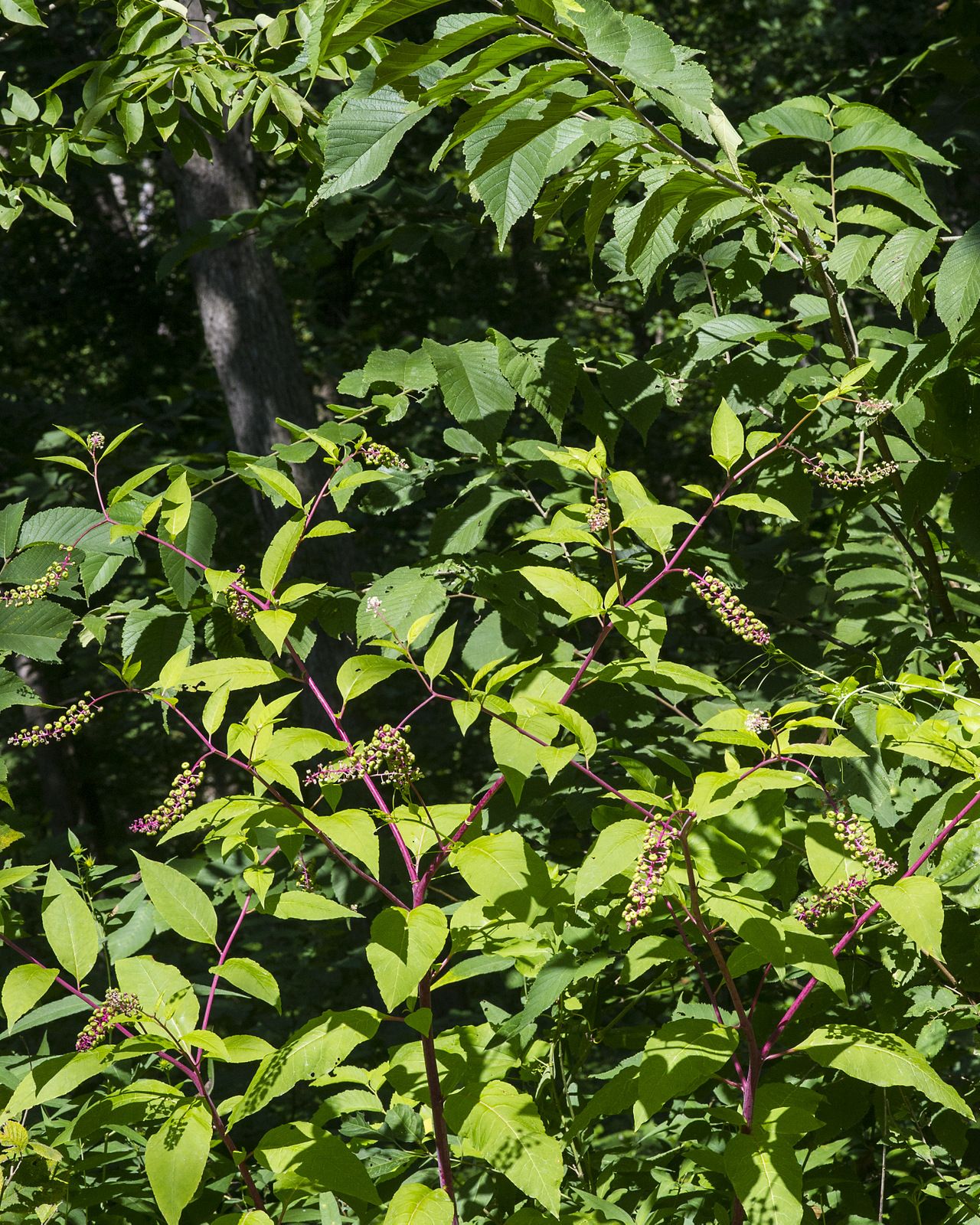 As fall gets closer, more of the berries turn from green to a deep black-purple shade. Just as a flower stem had buds, blossoms and small berries in the spring, now it will have green berries on the end, changing berries in the middle then some dark purple ones, then some that have been eaten already, leaving the bright red base on the stem. 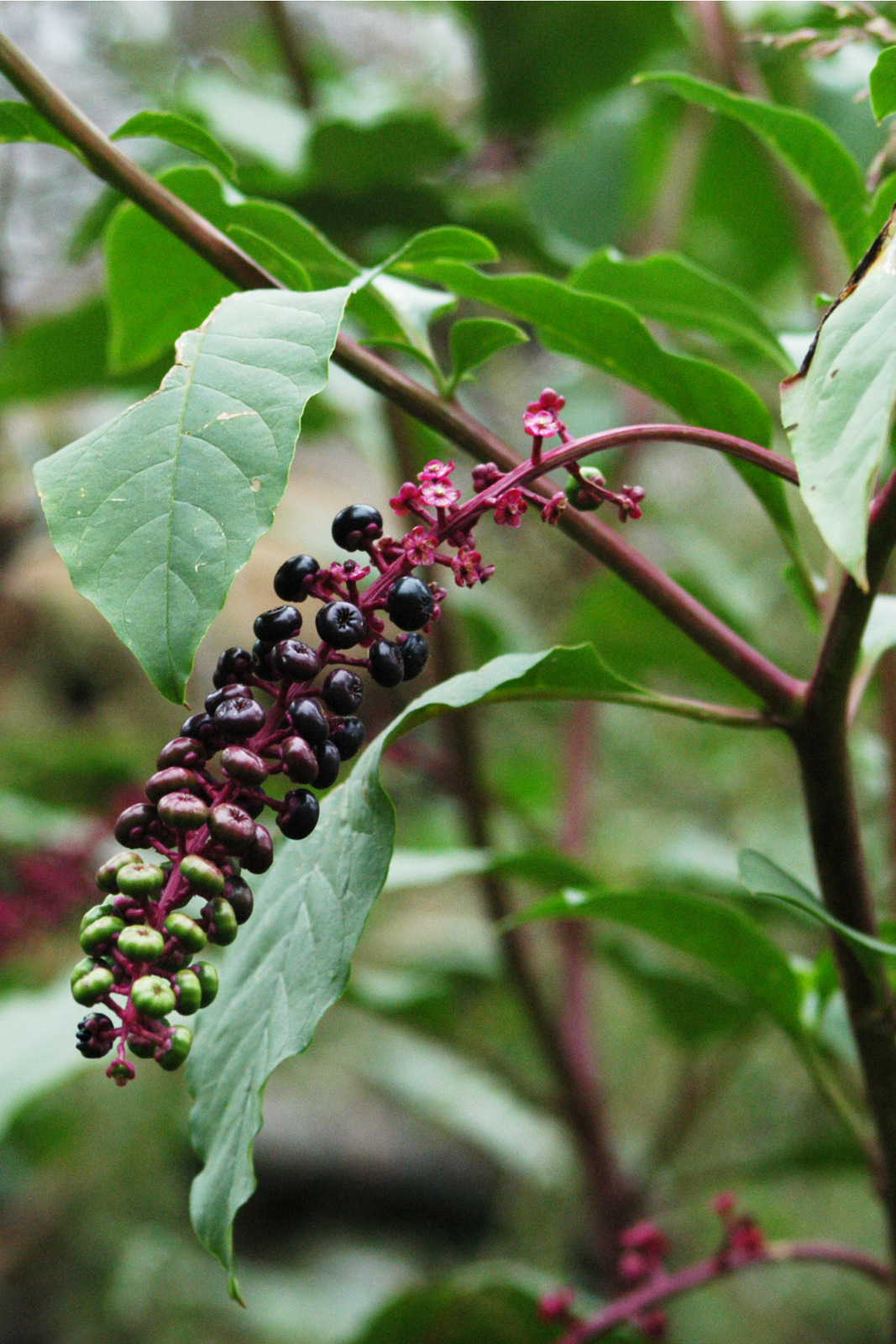 By late September or early October, the tall plant is burdened with its many heavy, ripening purple-black berries. The leaves, now 6 or 8 inches long, are looking duller green, most all stems are red, and the stalk is almost maroon. 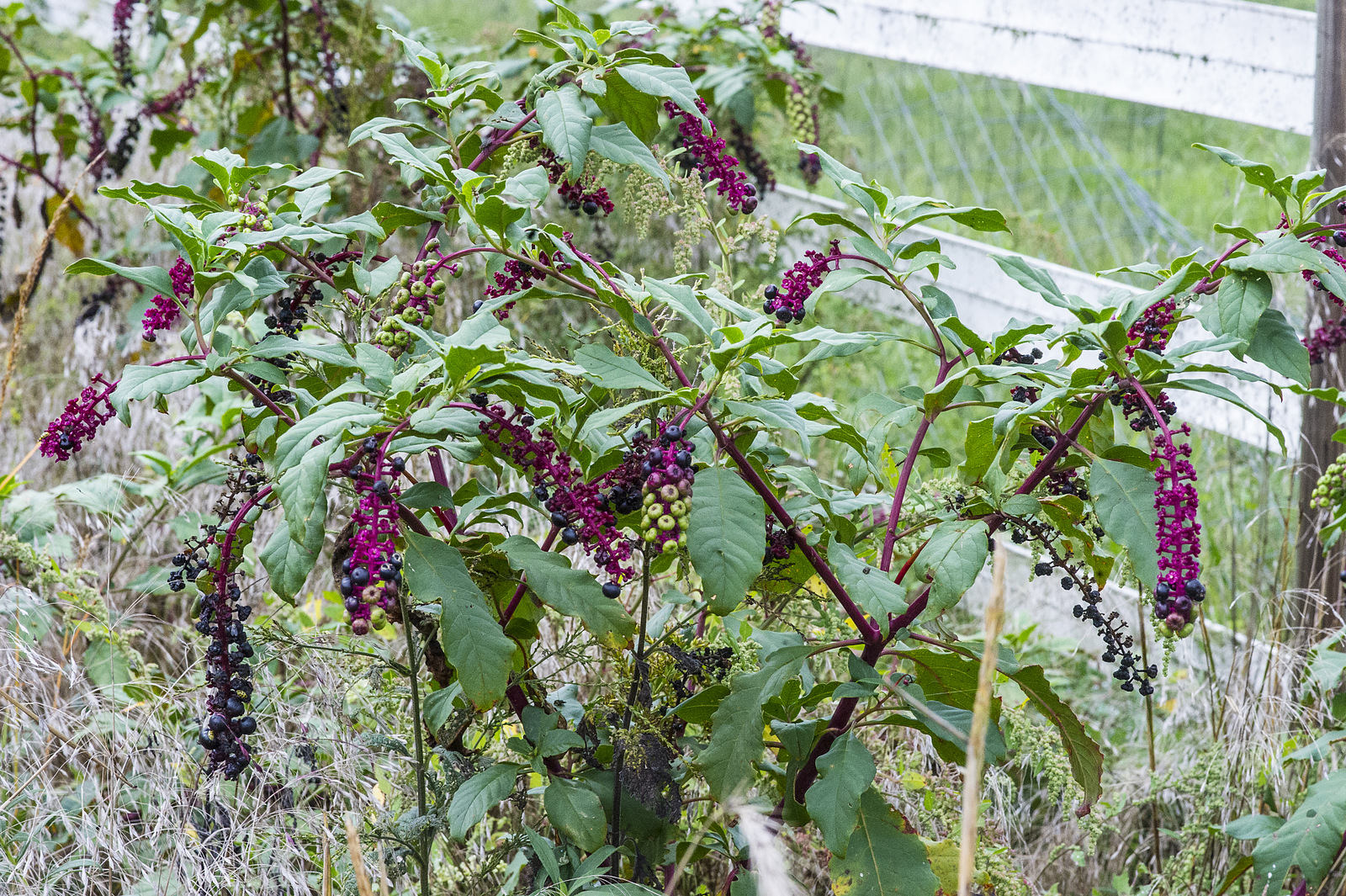 After frost, the now-brown plants with shriveled leaves stand with their berries. The birds will eat the berries and spread the seed to fence rows, brush piles, pastures, waysides….and yes, the occasional urban garden. Each mature plant puts its roots to sleep until spring when it can renew the cycle, with new growth pushing aside the dried hulk of the mother plant and so it begins again, and again…. By now the root is tough, large and fleshy—and must be dug up to remove it. 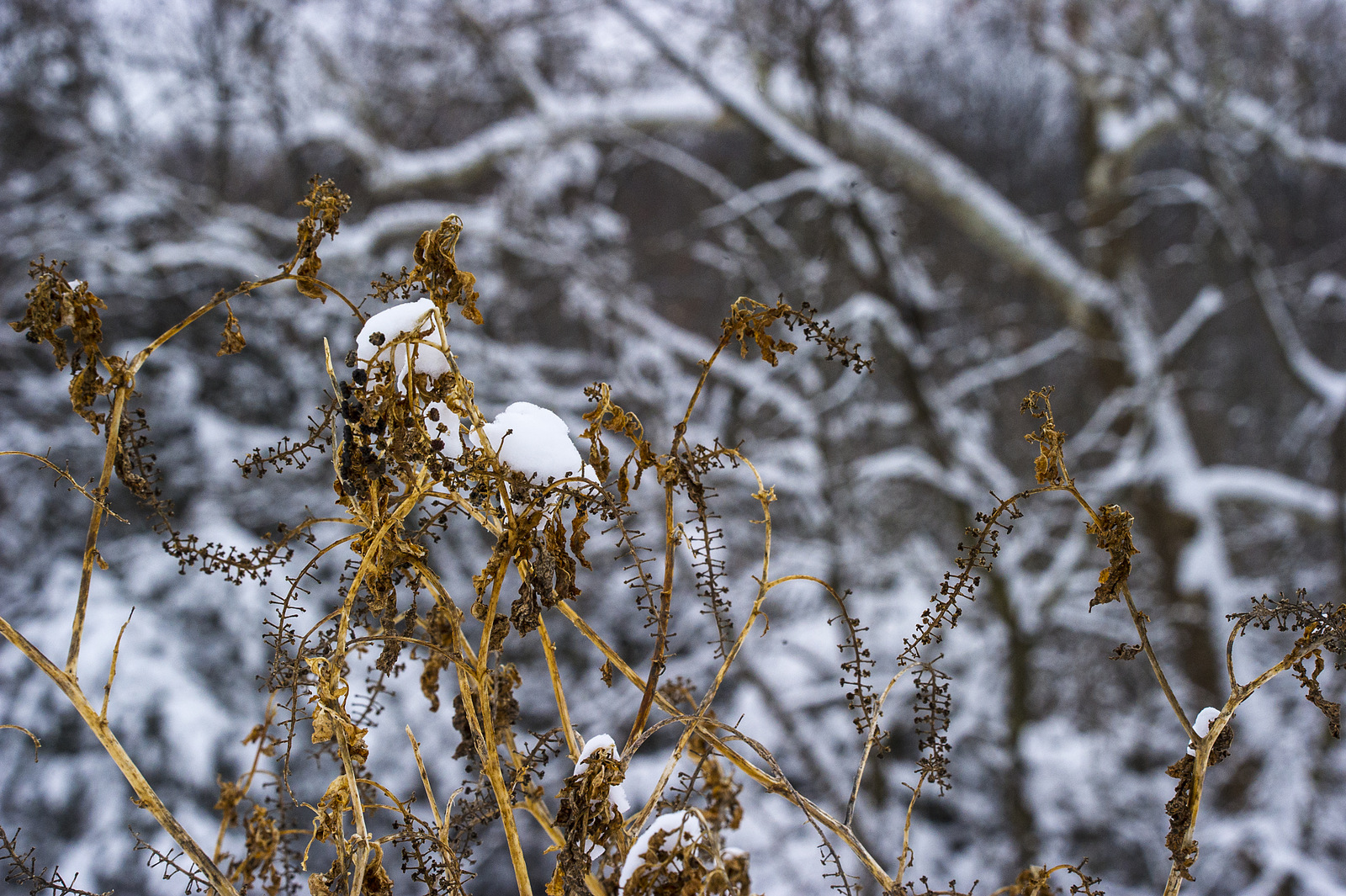 The plant is a perennial and can thrive for many years. It is difficult to eradicate once established. Yet its major reproduction is by seed –several thousand seed form each year on one healthy plant. The seeds can remain viable in the soil awaiting the right conditions for up to 50—yes—50 years.

The seed are in the dark berries that are a major food source for at least 30 bird species – both migratory birds and winter residents. 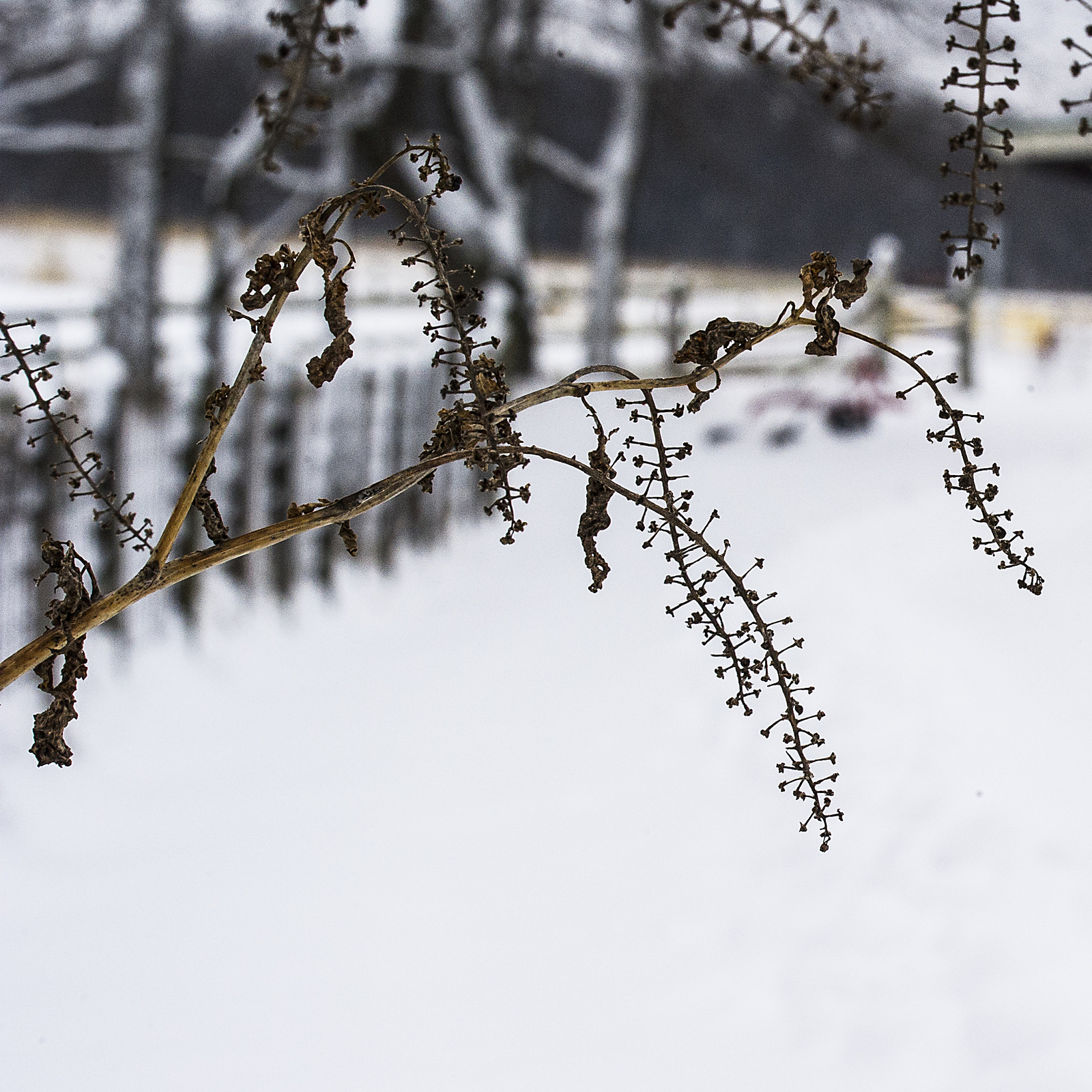 Poke is the Dr. Jekyll and Mr. Hyde of the plant kingdom. Few plants incite more dramatically opposite views than Poke. First of all, numerous internet sites and many newer books cite Poke as a poisonous plant—all parts. They caution the reader not to touch with bare hands and never oh, never taste. It is poisonous—as far as that statement goes, but that is not the complete story. Think rhubarb which we all know has poisonous leaves but we cook and eat the stalks anyway. Nothing about Poke should ever be consumed raw. The poisonous ingredients include Phytolaccatoxin (a resin), Phytolaccigenin (a saponin) and Phytolaccine (an alkaloid).

The presence of the poisons in the stems and leaf veins are revealed in the red color. The root has the highest concentration of poisons. Next most poisonous are the seeds inside the berries. Eating any of it raw can kill cows and other herbivores. Those dang seeds inside the awful tasting berries can send a child to the hospital, if they swallow them. Severe digestive tract irritation is the first symptom. More serous cases can cause rapid heartbeat, and convulsions. Even cats and dogs can be poisoned by ingesting any of it. Make no mistake—poisoning with Poke is serious and potentially deadly.

Yet, the National Institute of Health has numerous research articles regarding the Pokeweed Antiviral Protein (PAP). It is “a new and promising direction in cancer therapeutics” and shows promise in treating other virus caused diseases.

Traditionally for Native Americans, Poke had both medicinal qualities and food value, which was also learned and used by early colonists. Today, Poke is still one of the most widely eaten wild vegetables in this country—especially in the South. Always eat it cooked, never raw, and select and prepare it with care. As with eating wild mushrooms, you must know what you are doing to enjoy them and not become ill. Books such as Samuel Thayer’s Incredible Wild Edibles and Marie Viljoen’s Forage, Harvest, Feast explain how to select, prepare and enjoy poke (and numerous other wild edibles) safely.

Growing up in the South, we enjoyed both cooked poke in the spring along with pickled poke stalks–very tasty spring greens before there was much else at eating stage in the garden. In both cases, only stalks and leaves that were young and tender and had very little red were used as shown in this photo. 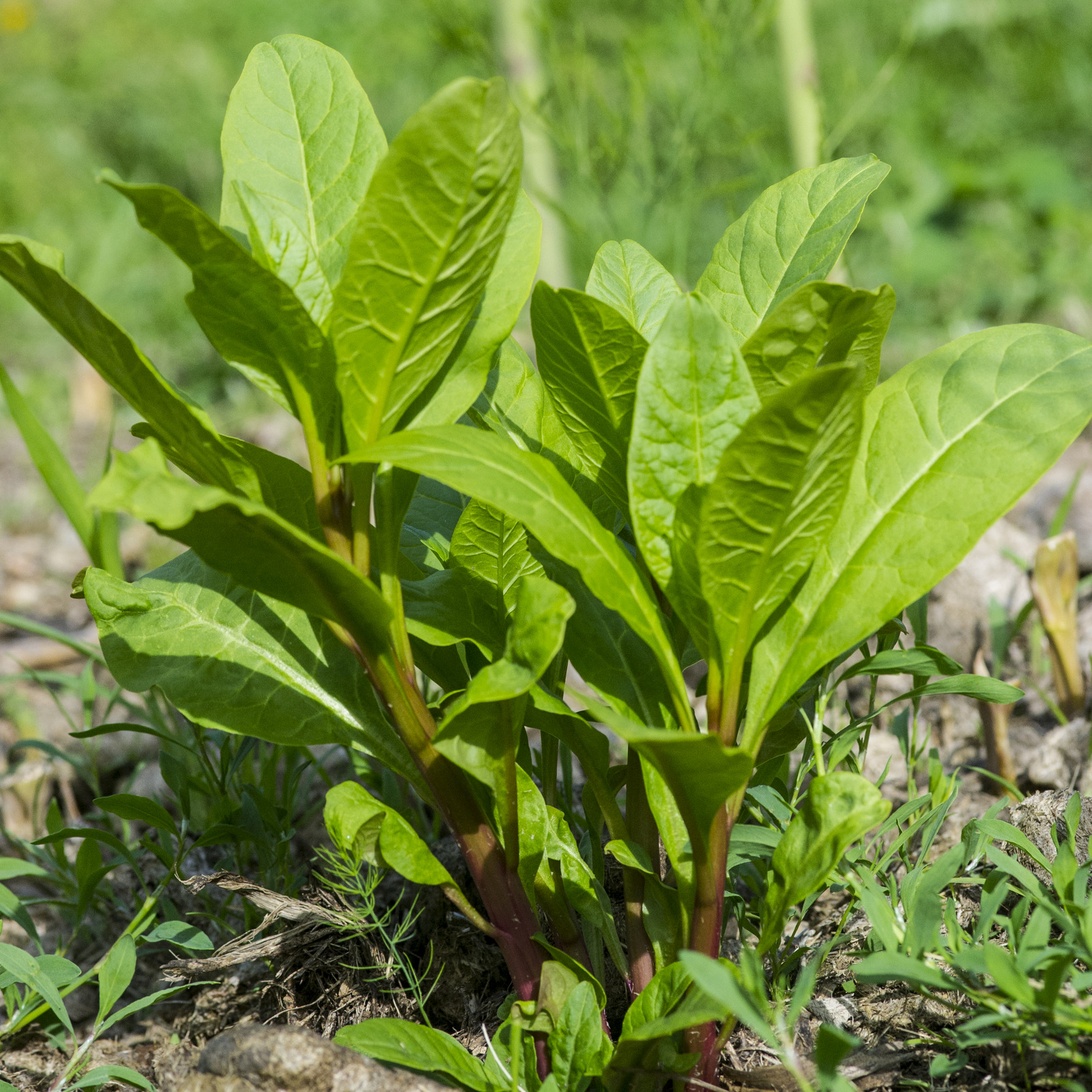 They were boiled, drained, rinsed then boiled, drained, and rinsed again. Finally, the leaves were stir fried in a skillet with bacon grease and an egg stirred into them. The stalks were covered in whatever pickling mix of vinegar, sugar, salt and water the cook preferred.

As a child, I picked the ripe berries, extracted the bright color with water and made ink to use much as Civil War soldiers had done to write home. I never experienced any ill effects nor was I tempted to swallow the lousy tasting berries. Polk dye is being investigated for possible use in fiber cell technology to increase the effectiveness of the cells.

To end on a lighter note, Poke has been immortalized (perhaps), in song under its alternate name “Polk Salad.” Written and recorded by Tony Joe White in 1969 then recorded by Elvis Presley in the early ’70’s – here are part of the lyrics to Polk Salad Annie. You can still find Elvis singing this song on YouTube. 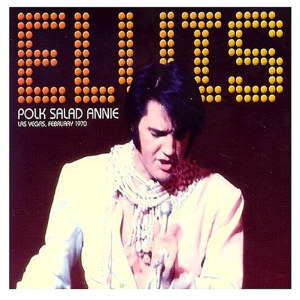 If some of ya’ll never been down south too much
I’m gonna tell you a little bit about this
So that you’ll understand what I’m talkin’ about
Down there we have a plant that grows out in the woods
And in the fields looks somethin’ like a turnip green
And everybody calls it polk salad, polk salad
Used to know a girl lived down there
And she’d go out in the evenings and pick her a mess of it
Carry it home and cook it for supper
‘Cause thats about all they had to eat, but they did all right
Down in Louisiana, where the alligators grow so mean
There lived a girl, that I swear to the world
Made the alligators look tame
Polk salad Annie, polk salad Annie
……..
Yeah, sock a little polk salad to me, you know I need me a mess of it
……