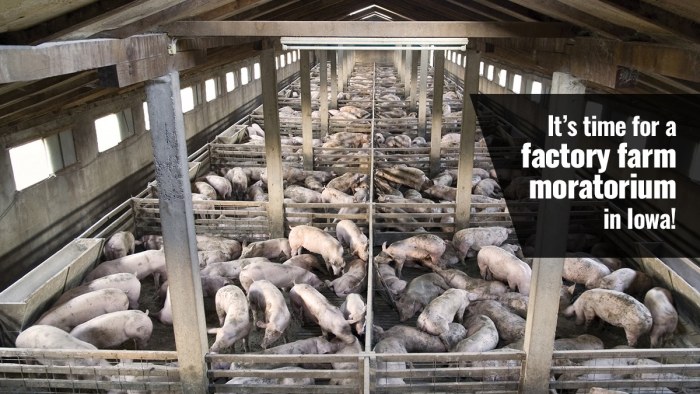 Iowa is in the midst of a water quality crisis. With more than 750 polluted waterways, increasing factory farm runoff, and weekly water advisories, Iowans must take action to demand clean water.

More than 10,000 factory farms in Iowa create 22 billion gallons of liquid manure each year. This manure is applied to cropland as fertilizer, but excess amounts run off into our lakes and streams. Corporate Ag has long claimed that the gallons of liquid manure produced by factory farms is negligible because it can be used to replace traditional chemical fertilizers. However, while we’ve seen an average of 500 additional factory farms built each year (creating that much more manure), we have not seen the sales of chemical fertilizers drop.

Factory farm waste is a top contributor to increasing nutrient levels in our water, fueling toxic blue-green algae blooms like those we have seen across the state. Algal blooms have made national news this summer, and for good reason: they can be highly toxic. Exposure can cause illness or even death. Last week, Donnelle Eller reported for the Des Moines Register that blue-green algal blooms have sickened at least 29 Iowans since 2000.

Pets and livestock can also become ill and even die from contact with water contaminated with blue-green algae. In North Carolina, three dogs recently died within hours of playing in a contaminated pond. Blue-green algae thrive in lakes and slow-moving, nutrient-rich water during the warmer months of the year; this summer, at least half a dozen lakes in Iowa have had advisories each week, warning of the presence of e. Coli or toxic blue-green algae.

Climate change and the associated severe weather events has also played a role in our declining water quality. Last fall, high levels of precipitation caused dozens of manure storage structures to overflow and reach nearby creeks and streams. Farmers were also unable to get into their wet fields to inject the liquid manure, leading the Iowa Department of Natural Resources to permit more than 100 exemptions allowing manure to be applied to frozen and snow-covered ground, in order to stop manure storage structures from overflowing during the winter months. That dangerous practice leads to runoff. This situation will become more frequent as climate change continues to impact weather patterns.

Inaction in the face of these growing threats is not an option. In March, Food & Water Watch and Iowa Citizens for Community Improvement sued the state of Iowa for its failure to protect the Raccoon River for the use and benefit of all Iowans. Iowa has allowed nitrogen and phosphorus discharges from agricultural sources to significantly impact the public’s recreational use of the River and harm the drinking water supply in Des Moines. The suit alleges that the state is failing to uphold its Public Trust duty under the Public Trust Doctrine, which requires the state to protect the public’s use of waterways and not abdicate control to private interests, such as agribusinesses and factory farms. Despite overwhelming evidence that agricultural water pollution is harming the Raccoon River, Iowa has imposed only voluntary agricultural pollution controls.

This lawsuit is not the first effort to address Iowa’s water quality crisis. The Des Moines Water Works, which has long struggled to provide safe drinking water as a result of agricultural pollution flowing from upstream, sought to hold upstream drainage districts accountable for nitrate runoff in 2015. The court dismissed the case on procedural grounds.

More recently, in both 2018 and 2019 bills were introduced in the Iowa legislature to enact a moratorium on new and expanding factory farms until the impacts of the industry could be assessed. While the bills garnered support from numerous legislators and Iowans across the state, neither bill made it past the major hurdle of being passed out of legislative committee. The bill will be introduced again in both the Iowa House and Senate during the 2020 legislative session.

We will continue to use every tool in our toolbox to demand that our legislators meaningfully address Iowa’s water quality crisis. Iowans have a right to clean water. This is not up for debate and should not be a partisan issue, and yet every year our leaders fail to take meaningful action to protect our waterways and our communities. Every single manure spill and algal bloom demonstrates the failure of Iowa’s voluntary approach to regulating factory farms. Every stream you can’t swim or paddle in demonstrates Iowa legislators’ willingness to sacrifice the public good for the benefit of agribusiness polluters. Enough is enough. It’s time for a moratorium on new and expanding factory farms. 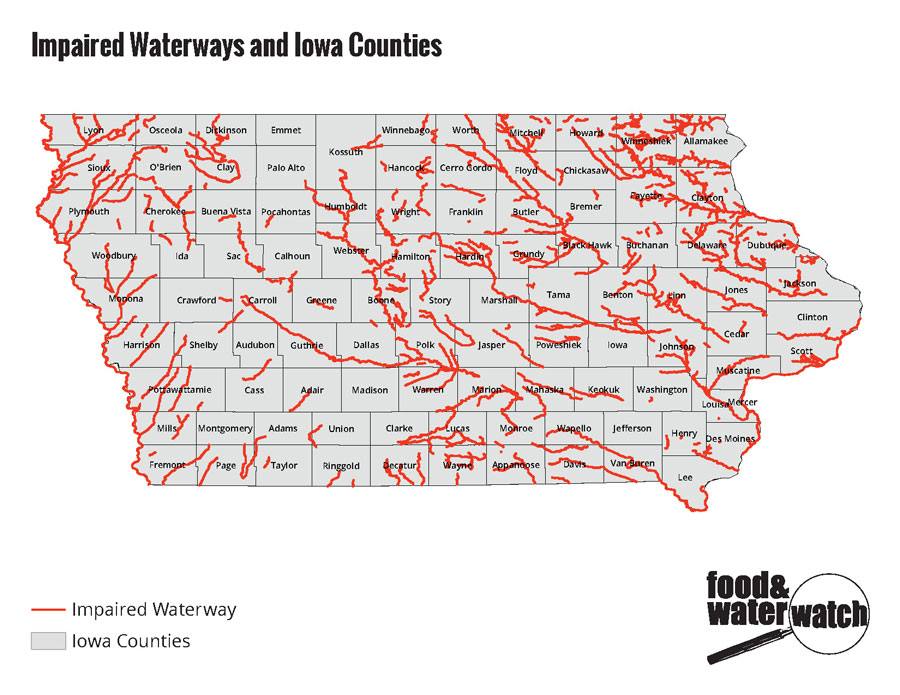