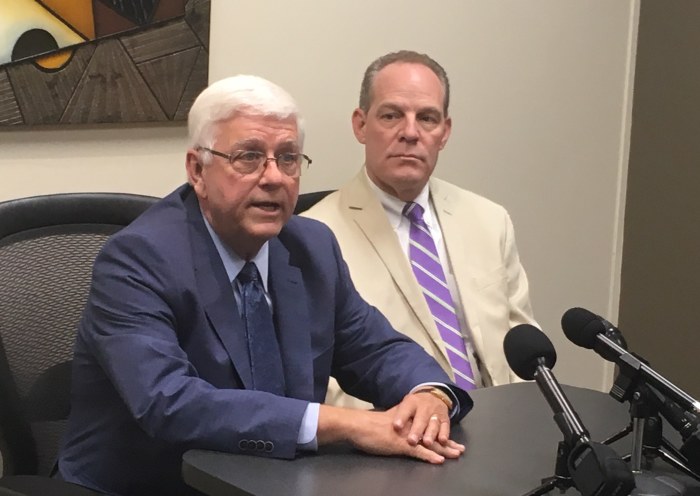 Former Iowa Department of Human Services Director Jerry Foxhoven has filed claims of "wrongful discharge in violation of public policy" against the state of Iowa as well as against Governor Kim Reynolds, the governor's chief of staff Sara Craig Gongol, and the governor's senior legal counsel Sam Langholz. I enclose below the documents Foxhoven's attorney Thomas Duff submitted to the State Appeal Board on August 29. They are consistent with Foxhoven's earlier remarks to the media about events preceding his resignation in June.

Foxhoven says he raised concerns about his agency continuing to cover part of the salary of Paige Thorson, Reynolds' deputy chief of staff. He had requested a legal opinion on the matter, but Gongol and Langholz forced him out the day before he had planned to email assistant attorneys general assigned to the DHS.

The tort claim asserts that the state and named officials terminated Foxhoven to stop him from disclosing information "he reasonably and in good faith believed constituted a violation of the law, mismanagement, a gross abuse of funds or abuse of authority" under Iowa law, and because he "refused to engage in illegal activity; that is DHS continuing to pay Thorson's salary despite the fact that she was no longer providing services that furthered the business of DHS."

David Pitt of the Associated Press reported that Duff "plans to seek $1 million from the state and $1 million from Reynolds, Gongol and Langholz although the final asking will depend on how long Foxhoven is unemployed and how much a new job may offer in salary and benefits compared to his state job." When forced to resign, he was earning $154,300 per year, plus benefits.

Once the complaint has been pending before the State Appeal Board for six months, Foxhoven can withdraw it and file suit in Polk County District Court. In theory, the Iowa Attorney General's office could negotiate a settlement before then. Duff told reporters early this month that in his experience, the state has never attempted to settle a wrongful termination claim at the appeal board stage.

In a statement provided to other news media on August 30, Reynolds said, “As I have consistently shared with Iowans, many factors went into my decision to ask for Jerry Foxhoven’s resignation. My focus remains on the many Iowans that DHS serves, and I am committed to selecting a new director who will take this agency to the next level." The governor has previously claimed Foxhoven "never raised concerns with me or my staff about the salary agreements in question, and he never asked my staff for a legal opinion or said he would be reaching out to the Attorney General’s office for one."

Foxhoven's tort claim against the state: