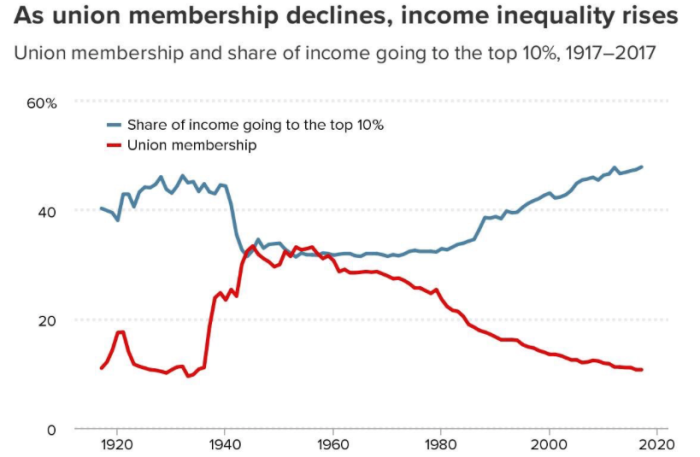 Labor Day should be about celebrating the many successes of the labor movement. The Economic Policy Institute has found, “On average, a worker covered by a union contract earns 13.2 percent more in wages than a peer with similar education, occupation, and experience in a nonunionized workplace in the same sector.20 This pay boost was even greater in earlier decades when more American workers were unionized.”

The percentage of U.S. workers represented by a labor union is lower now than at any point since World War II. That trend is among the factors contributing to income inequality not seen in this country since the 1920s.

Bobby Kogan, the chief mathematician for the U.S. Senate Budget Committee, shared the graphic at the top of this post on Twitter to mark Labor Day on September 2. He called the image “one of the most important graphs of the United States that exists. The single best way to fight income inequality is to support unions. They make society more fair, make work better, &, according even to places like the IMF [International Monetary Fund], are good for growth.”

The graph comes from a detailed Economic Policy Institute report on “How today’s unions help working people.” From the section on inequality:

The spread of collective bargaining that followed the passage of the National Labor Relations Act in 1935 led to decades of faster and fairer economic growth that persisted until the late 1970s. But since the 1970s, declining unionization has fueled rising inequality and stalled economic progress for the broad American middle class. Figures A and B show that when unions are weak, the highest incomes go up even more, but when unions are strong, middle incomes go up.

Research by EPI and other institutions shows this correlation is no accident. First, unions have strong positive effects not only on the wages of union workers but also on the wages of comparable nonunion workers, as unions set standards for entire industries and occupations (these union and nonunion wage boosts are explored in detail in the next section of this report). Second, unions make wages among occupations more equal because they give a larger wage boost to low- and middle-wage occupations than to high-wage occupations. Third, unions make wages of workers with similar characteristics more equal because of the standards unions set. Fourth, unions have historically been more likely to organize middle-wage than high-wage workers, which lowers inequality by closing gaps between, say, blue-collar and white-collar workers. Finally, the union wage boost is largest for low-wage workers and larger at the middle than at the highest wage levels, larger for black and Hispanic workers than for white workers, and larger for those with lower levels of education—wage increases for these groups help narrow wage inequalities.16

Some 180,000 public sector employees in Iowa lost most of their collective bargaining rights in 2017, thanks to Republican lawmakers and Governor Terry Branstad. That law–upheld this year in a 4-3 Iowa Supreme Court ruling–is the Republican trifecta’s best-known anti-worker action.

Other Republican policies that have undercut Iowa’s labor movement this decade include: