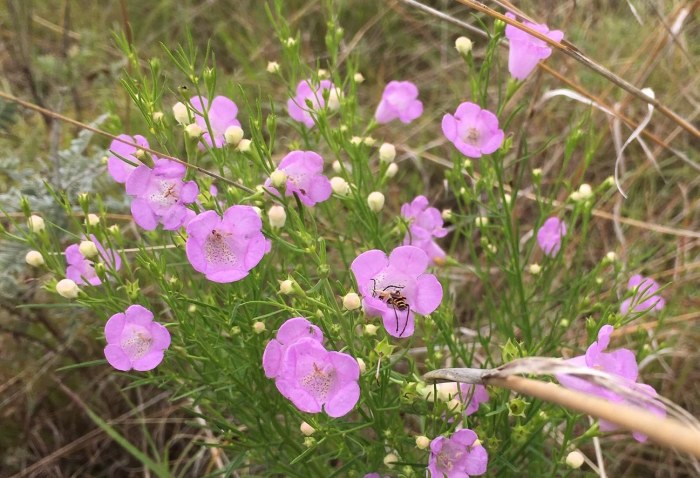 I had never encountered this plant before I started working to restore a native prairie remnant in the Loess Hills (an experience I wrote about here). My curiosity led me to learn more about A. tenuifolia, also known as slender-leaved false foxglove, and ultimately to share here some of the information I have gleaned about its life cycle.

Despite reaching 1 to 2 feet in height, slenderleaf false foxglove is easily overlooked among the other grasses and forbs of the prairie due to its wispy light green foliage. When it blooms, however, its clusters of snapdragon-like flowers, which are bubblegum-pink on my prairie, add a striking pop of color to the landscape. 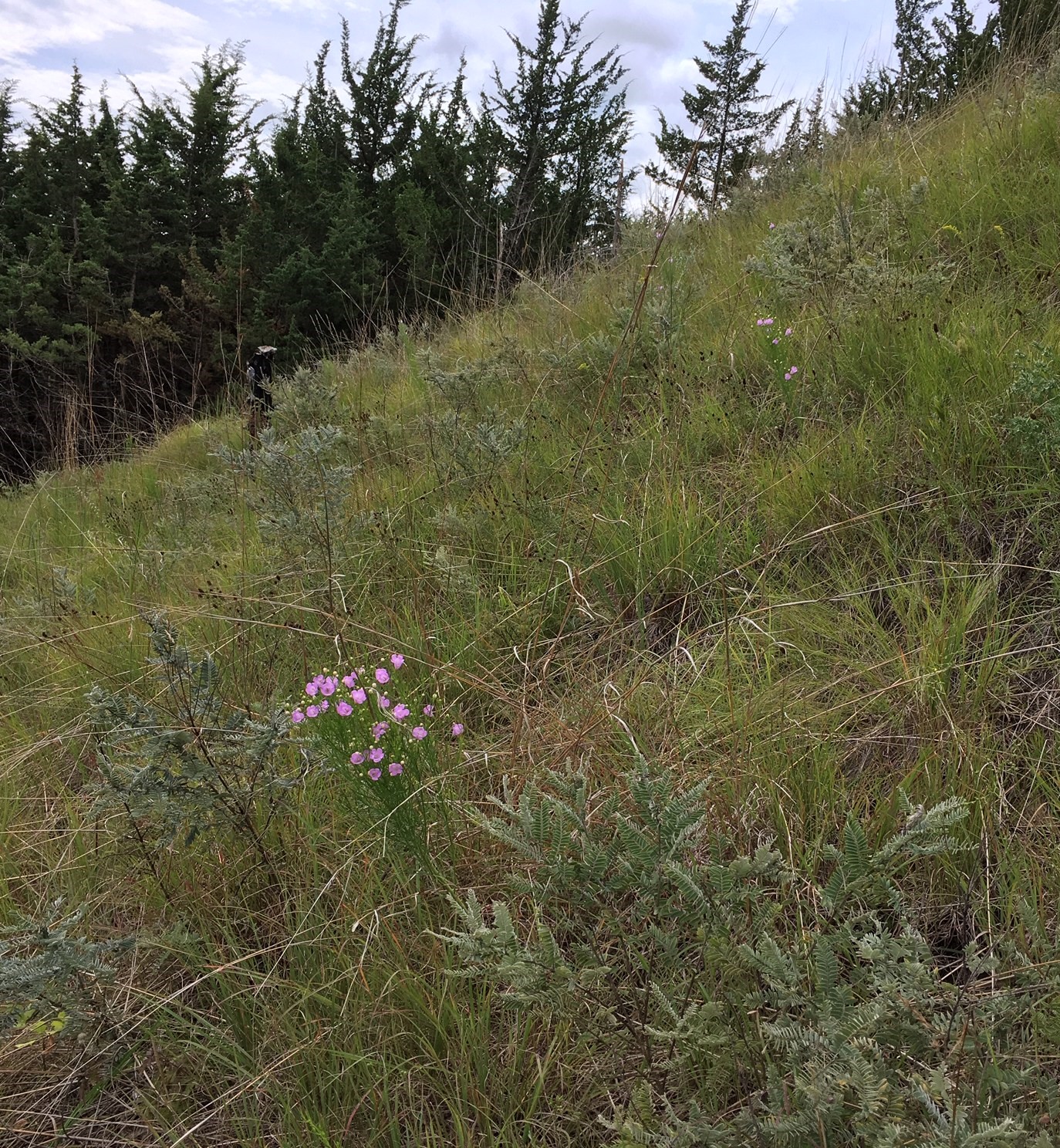 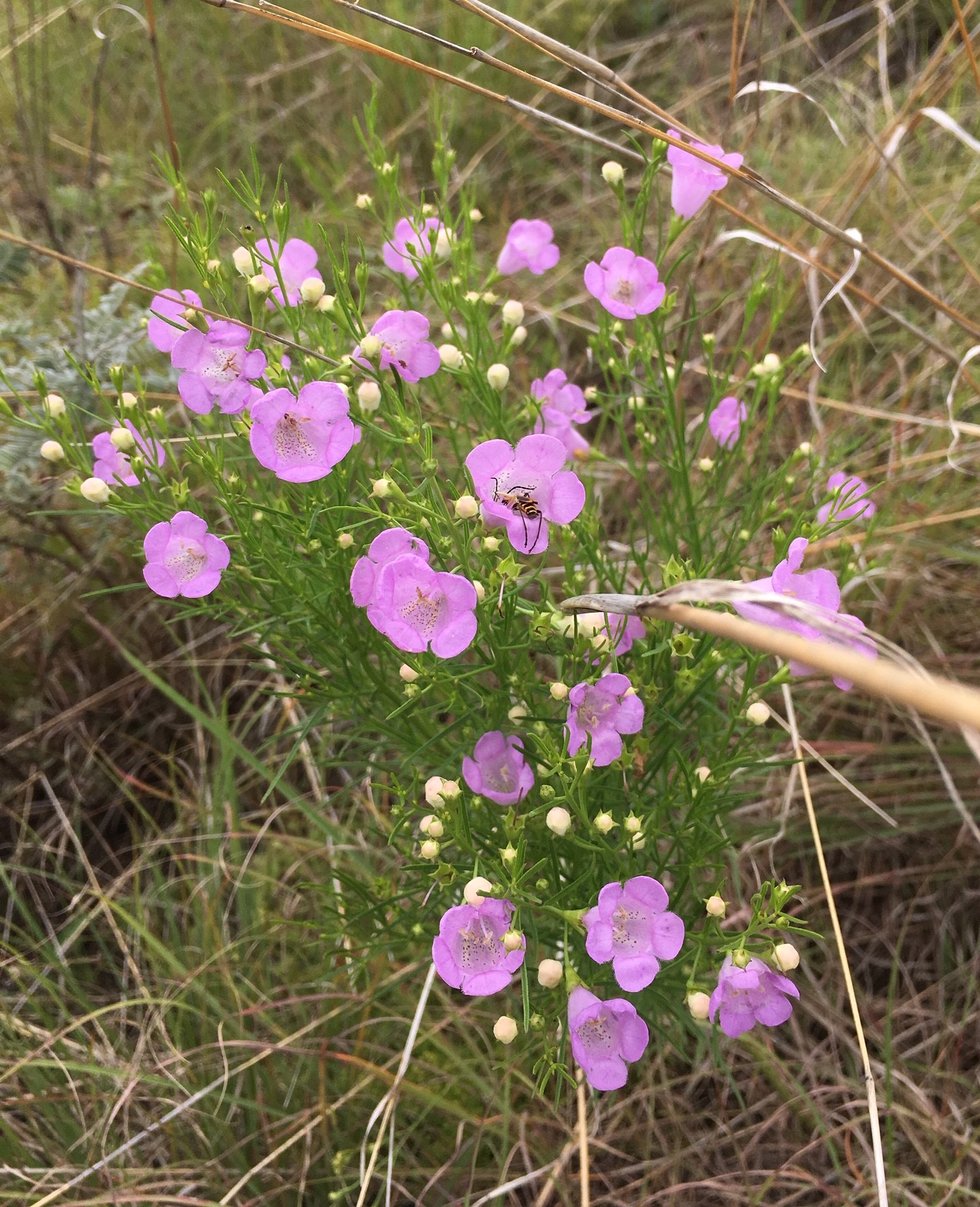 The Minnesota Wildflowers site describes this plant as follows:

Single flowers on slender stalks ½ to ¾ inch long arise from leaf axils on many branching stems. Flowers are about ½ inch long and 1/3 inch across with 5 pink to purple finely hairy rounded lobes, fused into a shallow cup-like white throat spotted pinkish purple and greenish at the back. The 2 upper lobes form a hood over the white stamens, with the lower 3 lobes flaring open and slightly rolled back. The fused sepals forming the calyx have short sharply triangular teeth. Each flower only lasts a day or 2 before falling off. Only a few flowers per branch bloom at a time. Leaves are linear, ¾ to 2 inches long, less than 1/8 inch wide, toothless, hairless, stalkless, with a prominent central vein, oppositely attached. Stems are angled and smooth to the touch. Leaves and stems can turn dark reddish purple in drier conditions. Fruit is a shiny globular capsule about ¼ inch across, containing many seeds.

A closer view of the flowers: 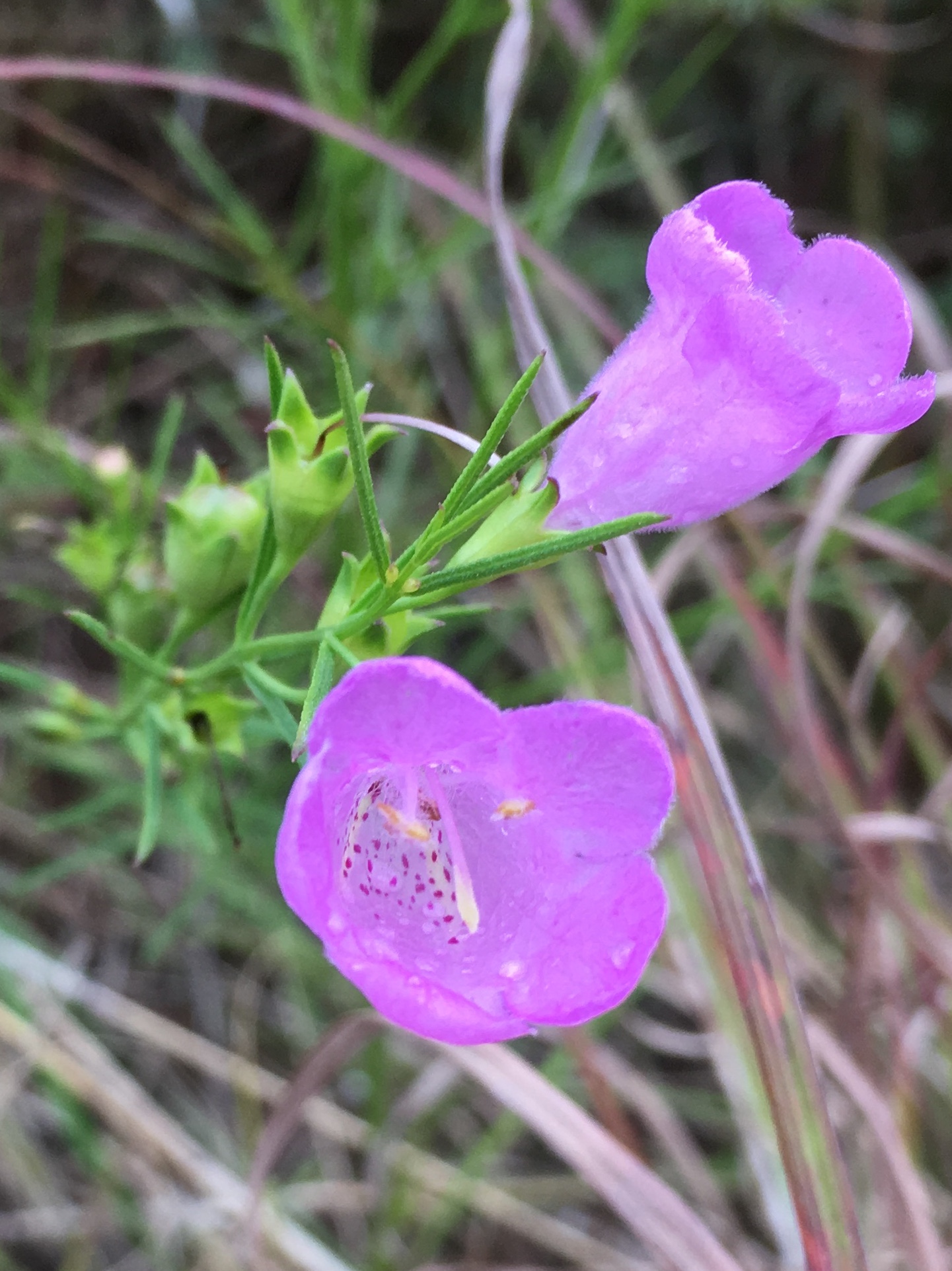 A closer view of the fruit forming: 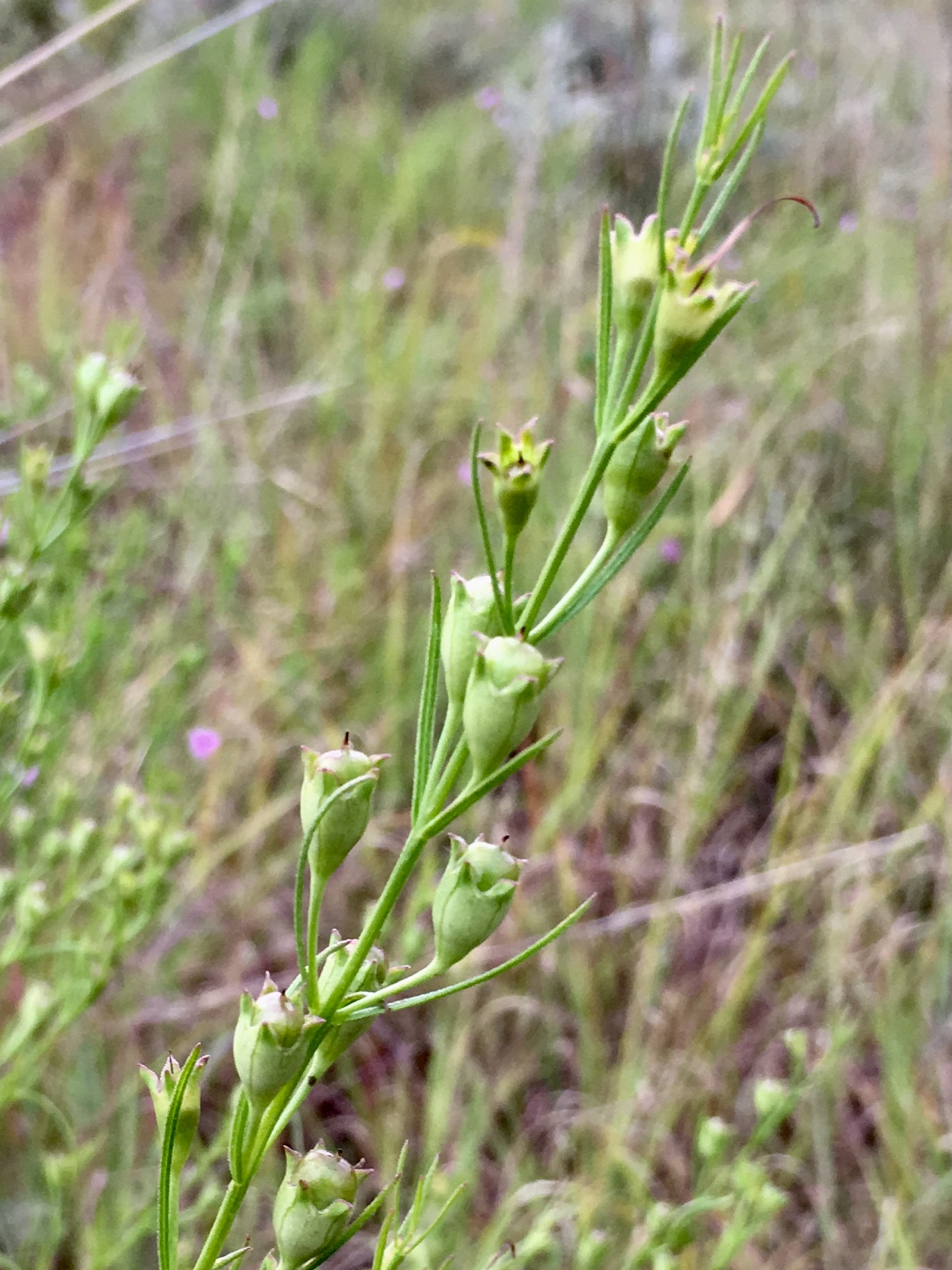 According to a range map produced from Floristic Synthesis of North America (BONAP) found here, A. tenuifolia is broadly distributed throughout the eastern two-thirds of the United States, but mainly centered in the upper midwestern, mid-atlantic, and northeastern states. Within Iowa, counties with records of this plant are spread throughout the state, but are mostly located in the eastern half of Iowa.

Although it can be found in many habitats throughout its entire range, from dry to wet, and from prairie to open woodlands, the slenderleaf false foxglove in Iowa seems to be mainly associated with well-drained prairie sites. Besides the photos I show here taken in the Loess Hills, Katie Byerly recently found slenderleaf false foxglove and many other late summer wildflowers at the Fossil and Prairie Park Reserve in Rockford (Floyd County) and shared a lovely photoset in the Iowa Wildflower Report Facebook group. The next two photographs are Katie’s: 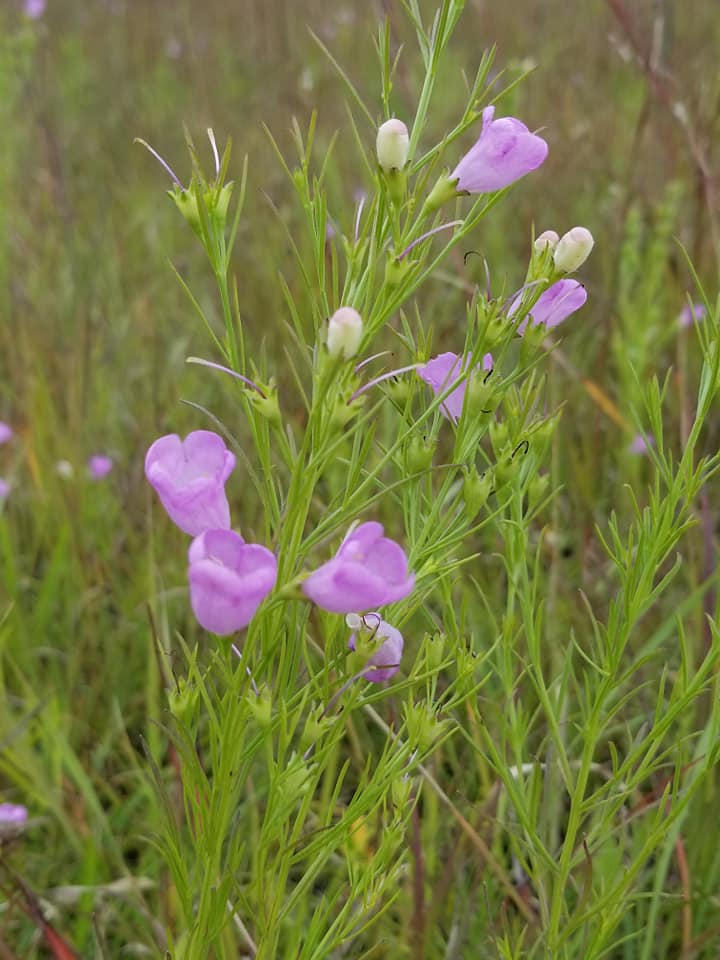 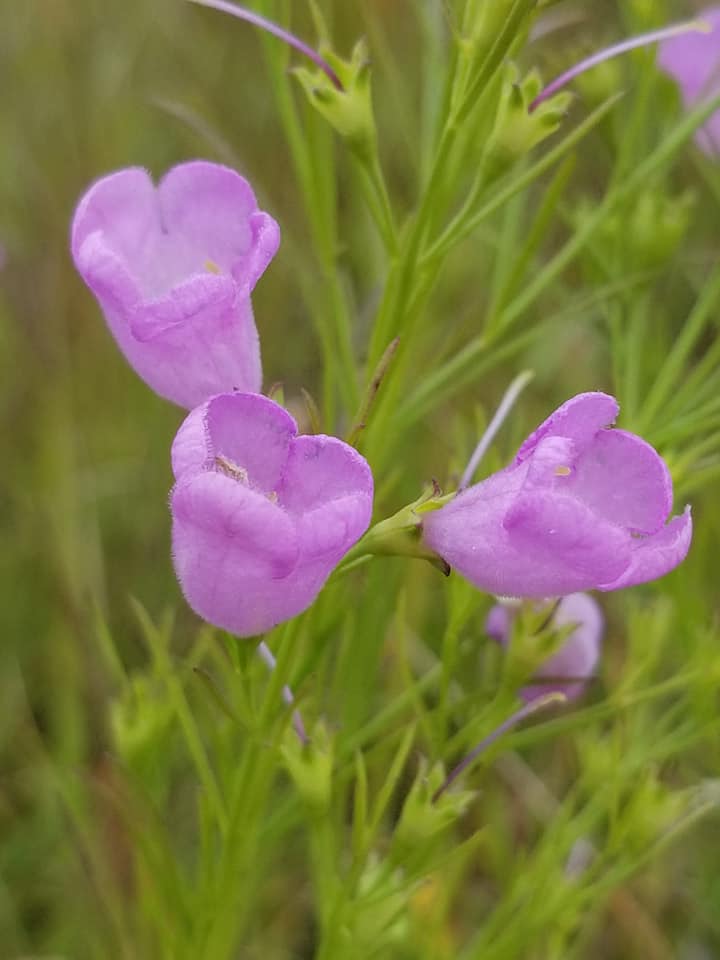 An interesting trait of the Agalinus genus is hemiparasitism. In case you are not familiar with the term “hemiparasite” in a plant context, it refers to a plant that is photosynthetic during at least one stage of its life cycle, but still obtains water and nutrients from a host plant.

Hemiparasites may or may not require a host plant to complete their life cycle. Members of the broomrape family (Orobanchaceae), to which A. tenuifolia belongs, are nearly always associated with a host plant in the wild, but do not strictly require one to complete their life cycle. Spacially at least, slenderleaf false foxglove on my prairie remnant seems to be most closely associated with little bluestem and big bluestem (Schizachyrium scoparium and Andropogon gerardii, respectively), making these grasses the most likely hosts.

The means by which the parasitic plant attaches itself to the host plant is through a modified root structure called a haustorium. I always wondered how A. tenuifolia can remain verdant in dry weather, despite being an annual plant. A physical connection to a deep-rooted perennial (presumably a bluestem grass) from which it can extract moisture helps explain its ability to withstand drought conditions.

The taxonomy of the Aganalis genus has been historically challenging and has been subjected to many revisions over the years in the classification of, and relationships between, the species and subspecies of this genus. Recently, an extensive study comparing the DNA sequences of 29 members of the approximately 40 North American Agalinis species was performed to help clarify the genetic relationships between these species.

The authors of this study included multiple individuals of each species collected from different geographic regions to evaluate and control for genetic variation within the species. Of relevance to this post, the authors sampled specimens of A. tenuifolia collected from Story Co., IA, Prince Edward Co., VA and Caddo Parish, LA. Interestingly, their phylogenetic analysis revealed A. tenuifolia to be most closely related to a southeastern species called A. laxa (twoline false foxglove), a coastal species called A. maritima (saltmarsh false foxglove), and central U.S. species (considered native, but rare in Iowa) called A. gattingeri (round-stemmed false foxglove).

Besides being attractive to a wide range of pollinator species, A. tenuifolia is also noteworthy for being a host plant for the Common Buckeye butterfly (Junonia coenia). I have repeatedly observed caterpillars of this species on A. tenuifolia growing on my prairie remnant over the years, including this year. 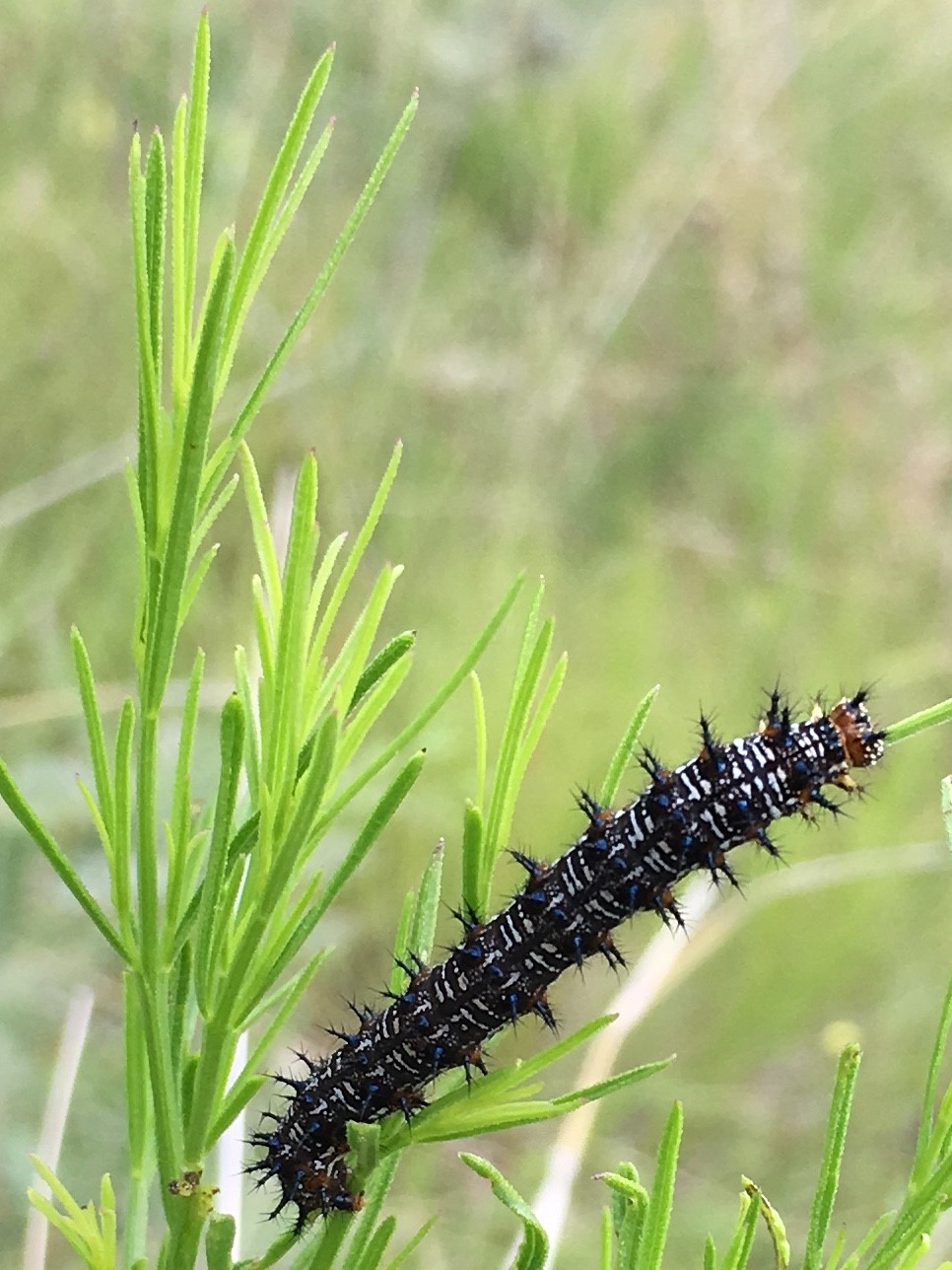 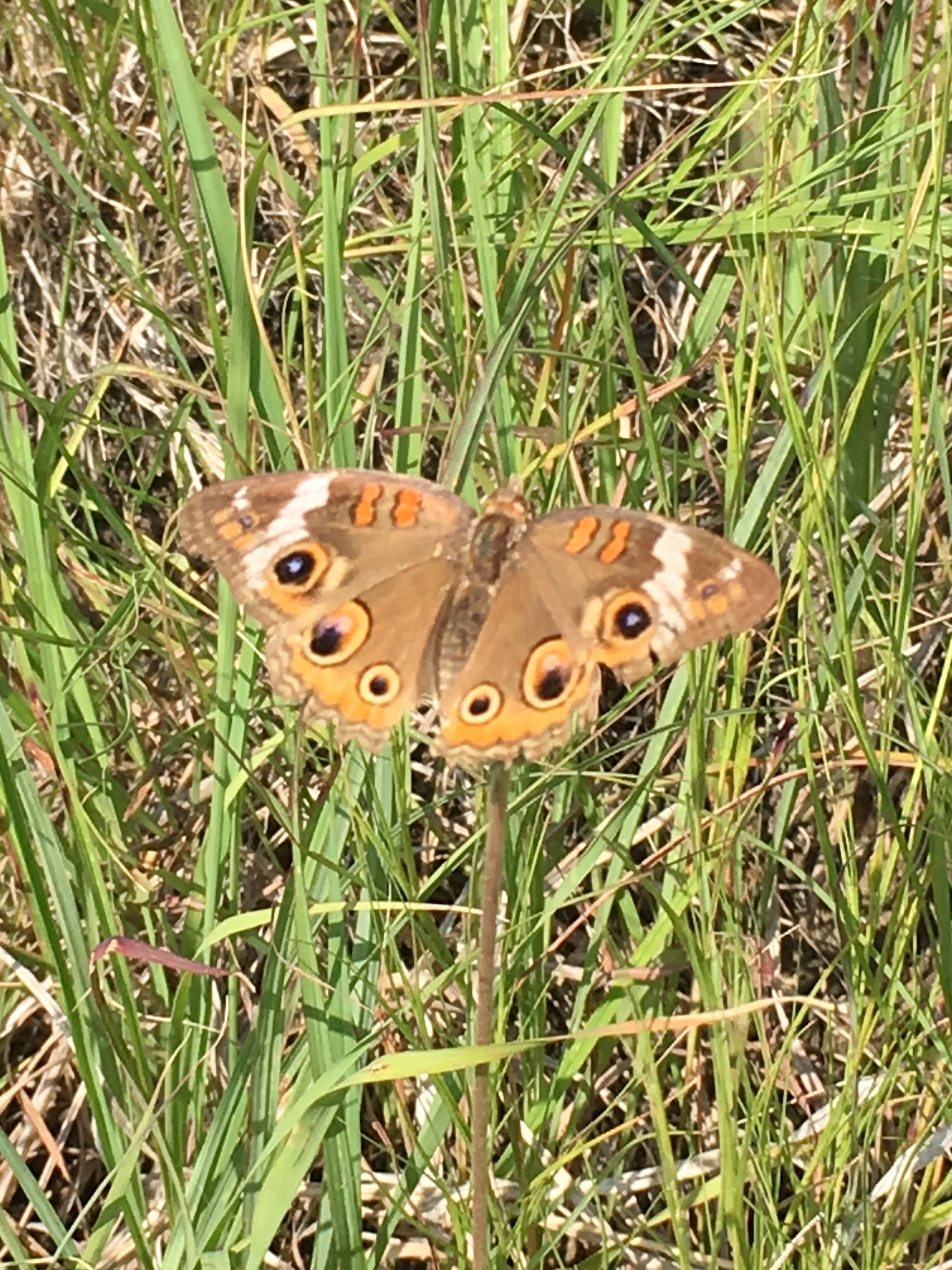 An open question for me is how slenderleaf false foxglove responds to prescribed fire. My prairie remnant was burned in May 2018. Last summer, I was struck by the near-absence of A. tenuifolia, making me worry that the fire had irreparably damaged the population. I speculated on how that might have occurred. Perhaps the fire killed plants that had recently germinated, effectively eliminating the population for the year. Or perhaps the fire weakened the grasses so that they were poor hosts for the plant, or created conditions unfavorable for seed germination.

Whatever the reason, this year I was relieved to see the population rebound and apparently robust. This outcome suggests that the seed bank remained plentiful enough to re-establish the colony. Nevertheless, my experience with A. tenuifolia’s response to fire, if observed by others, may provide a cautionary tale on how fire can impact plant and insect populations, at least temporarily.

I find slenderleaf false foxglove fascinating for its hemiparasitic lifestyle and because this species illustrates well the complexities of the interdependence between plants and their pollinators and consumers, and the environmental conditions to which they must adapt to survive.

Enjoy the beauty of the fall prairie!