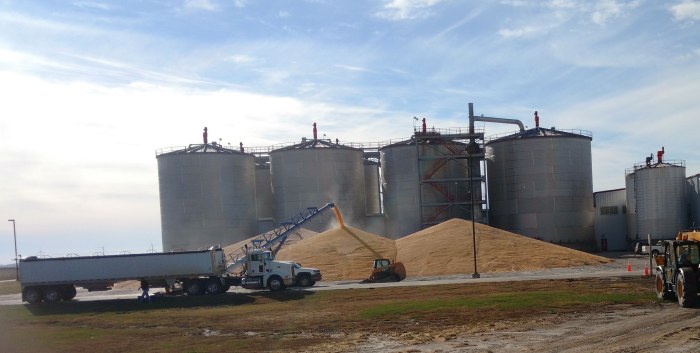 David Weaver farms in Greene County and was the 2018 Democratic candidate in Iowa House district 47. He wrote this commentary after October 1, when Reuters reported that the Environmental Protection Agency had halted work on biofuels policy adjustment, and before October 4, when the Trump administration announced an agreement on the Renewable Fuel Standard. Republicans hailed the plan, while Democrats described it as vague and inadequate. -promoted by Laura Belin

Well, you have to wonder when a farmer from Rippey decides that it is time to challenge the statistical findings of an economist (and a well known and very well-respected economist like Dave Swenson), but here is my mighty swing at explaining why the ethanol industry’s problems are a demand-driven crisis, not a supply-driven crisis as Mr. Swenson contends.

My initial premise is that the sky is NOT falling. Rather, the ceiling has been lowering itself at a steady rate since Donald Trump took office and installed his EPA leadership. The demise of three Iowa ethanol plants during the past month are merely the first indications of the straw that broke the camel’s back.

Using the Weekly U.S. Refiner and Blender Net Input of Fuel Ethanol from the U.S. Energy Information Administration, I chose to (somewhat arbitrarily) look at the 12 week moving average numbers of production. I looked at the first week in June and charted the change, year-over-year, starting from 2010 and continuing through to June of 2019. These are all back of the envelope numbers, but from where I sit the entirety of the ethanol plant closings is a failure of Donald Trump’s EPA and its successful attempts to subvert the legislation passed by Congress.

Again, these are using 12 week moving average numbers; my thinking was that this would give a better average snapshot of the industry trend and growth in general. In addition, I considered that June was the middle of the driving season and that it would also not be impacted by any winter snowstorm, which sometimes can slow ethanol grind (if a plant can’t get enough corn delivered due to snow storms or holidays).

The problem with pointing to ethanol “demand” is that virtually all demand for renewable fuels in the United States is not market-based, but instead “legislatively” based. Demand is based upon the Renewable Fuel Standard (RFS), a federal program that requires transportation fuel sold in the United States to contain a minimum volume of renewable fuels. The RFS originated with the Energy Policy Act of 2005 and was expanded with the passage of the Energy Independence and Security Act of 2007. Originally requiring use of 4 billion gallons in the first year, the legislation steers towards growing to 36 billion gallons of renewable fuels to be used in the year 2022.

Demand is not set by the market but mandated legislatively. The legislation did allow flexibility to the agency in charge of implementing this policy, the Environmental Protection Agency. An excellent guide to understanding the RFS is The Renewable Fuel Standard (RFS): An Overview from the Congressional Research Service (most recently updated September 4, 2019).

According to the Congressional Research Service, the EPA Administrator has the authority to waive the requirements in the mandated gallons of renewable fuels to be used under certain conditions. It is my contention that Donald Trump’s selection of EPA heads (and their use of waivers) has undermined the legislative intent of the laws passed by Congress in establishing the RFS.

Looking back to the basically full-stop demand for U.S. ethanol in June of 2017, I would argue that there is one factor above all that impacts the demand for renewable fuels. The EPA Small Refinery Exemptions (SRE), which first were implemented during the Obama Administration. For the years 2013-2015, the EPA received 43 petitions from small refiners to exempt them from blending ethanol. The Obama EPA granted 23 of those exemptions (a rate of 53 percent). For the years 2016-2018, the Trump EPA received 99 petitions, and granted 85 of those exemptions (a rate of over 84 percent). Not only did the rate of acceptance climb, the number of requests more than doubled.

the U.S. Congress intended the RFS to force usage of biofuels into the U.S. surface transportation sector, even if it required higher fuel prices. The RFS statutes do specify that the “demand pressure” can be relieved through a general waiver authority, but invoking this authority requires meeting the high hurdle of “severe economic harm.” The EPA has made no effort in recent years to justify the volumetric reductions caused by its SRE policy based on this criterion.

I mention this a second time in a slightly different manner, because I believe that it is this simple. It isn’t in fact the most recent 31 Small Refinery Exemptions that were announced in August. Rather, the closing of three renewable fuel plants in Iowa is due to the Trump EPA’s aggregate policies of the past three years, which have decimated the demand (and thus the profit margins) of renewable fuels.

Trump’s choices for top spot at EPA were first Scott Pruitt, and later, Andrew Wheeler, both of whom were confirmed by Senate vote, and both were affirmed with the approval of Iowa’s Senators Chuck Grassley and Joni Ernst. Both are heavily influenced by the fossil fuel / petrochemical industries. My contention is that their leadership of EPA has in fact absolutely gutted the demand for renewable fuels and directly conflicted with the initial intention of the legislation passed by Congress and signed by President Bush in 2005 and 2007.

The “other” part of renewable fuel (and mainly ethanol) demand is the world export market. According to the U.S. Energy Information Administration, demand for U.S. ethanol has grown significantly.

I would contend that once the Trump Administration significantly reduced U.S. demand, the ethanol produced in the U.S. needed to find a new home, and it easily did so. The world marketplace of ethanol is dominated by Brazil, and supply of ethanol worldwide is somewhat (significantly?) determined by growing conditions of sugar cane (and increasingly corn-based) for ethanol production. The main focus of the United States ethanol production is based upon the RFS; the world market has been an opportunity when Brazilian exports fail to meet demand due to growing conditions in their country.

The key to the RFS is that the mandated numbers from Congress will expire in 2022. Taking the time to look through the Congressional Research Report, one sees that conventional biofuels (ethanol) and biomassed-based diesel (soy biodiesel) are the only two renewable fuels that have been able to meet the targets mandated by Congress. So, for an Iowa corn farmer who raises corn and soybeans, it would seem that this is an absolute success of the RFS. The farmer raises enough corn and beans to supply a growing industry that in essence came into its own in fifteen years. However, this is where the story does indeed get interesting.

After the year 2022, there are no numbers (i.e. mandated gallons) to be achieved that are mandated by Congress. Starting in 2023 and beyond, the EPA has (as passed by the Congressional law) absolute authority to set any numbers or standards for renewable fuel use in the United States. If I was a candidate for President or a sitting United States Senator from a state that grows corn (that is every state in the lower 48 by the way), it would seem to be a no-brainer to hold hearings on the subject of the RFS and the path forward for renewable fuels in the United States of America. In a state like Iowa that has 20 percent of its economy based in agriculture, this is a topic/subject that can really move the needle.

With the current rate of E-10 (ethanol at 10 percent of the fuel you likely put in your car), there has been talk of a blend wall, and indeed the President and EPA passed legislation allowing for the sale of E15 year-round. However, there are countries that use biofuels at a much higher blend rate. Brazil is at E27 (27 percent ethanol) in most of their vehicles, and has a large industry of agriculture and ethanol plants that support renewables in their vehicles.

I am not advocating for a push to E-27. I AM advocating for this current administration to follow the law (and legislative intent) of the Congress of the United States. I am concerned that renewable fuel plants are closing in Iowa. The jobs at most of these plants provide good benefits and provide great markets for farmers to market corn and soybeans. The value-added step at these renewable fuel plants is taking part in Iowa. In general, the price of corn has been significantly higher due to the use of ethanol in the fuel supply of the United States. Ethanol burns cleaner and causes less pollution than most fuels.

Detractors will say that the higher price of corn makes the price of land higher (more valuable), which causes the ability for a younger or smaller farmer to expand much more difficult (i.e. much higher capital outlays). They also might say that much “marginal” pasture land or conservation acres have been converted to corn and bean fields, and I would agree that that has been a downfall of the increased use of biofuels in the United States.

However, for every farmer that cut trees off of hillsides and creekbeds to farm an extra acre or two, there was probably a farmer like me; we put over 100 acres into the Conservation Reserve Program (removing it from corn/soybean production) in the past five years. Generally, the RFS has been an excellent example of a program legislated by Congress in a bi-partisan manner that quickly stood on its own two feet. Subsidies and trade protection aspects of the legislation to help renewable fuel plants get started were eliminated in 2011.

What does the future look like? As I stated unabashedly, the renewable fuels market is currently supported and controlled by Congress and the EPA. This means that the politics of renewables is front and center. Donald Trump and his administration have at this writing done nothing to alleviate the demand destruction that SREs have caused. Iowa’s elected senators confirmed the choice of EPA heads Pruitt and Wheeler. Representative Steve King (IA-04) was denied a seat on the plane when Donald Trump came to Iowa in June to announce his E15 program.

I am currently reading Governor: An Oral Biography of Robert D. Ray, and the words of Del Stromer (p. 82) seem appropriate:

In 1970 we had pitchforks and hammer handles in the rotunda, farmers protesting their tax bills. Bob Ray wasn’t as cognizant of the problem as he should have been. He didn’t perceive how serious that property-tax issue was, but what you had out there was a net earning capacity for that ag land of fifteen dollars an acre, and you had six and seven dollars an acre property tax. Nearly half of our net was being taken away in property taxes. Now we’ve got the same problem, but it’s interest and not property taxes. That lack of perception nearly got him beat.

I would argue that any elected official in Iowa who continues with a “lack of perception” on the Trump Administration and his EPA’s handling of the Renewable Fuels Standard will have a tough go in 2020.

article by Scott Irwin for AgFax

exports to all countries

Report by Todd Neeley for DTN: Pruitt Advised Not to Issue Exemptions

February 2019 white paper by Covington and Burling: “An Analysis of the Renewable Fuel Standard’s RIN Market”