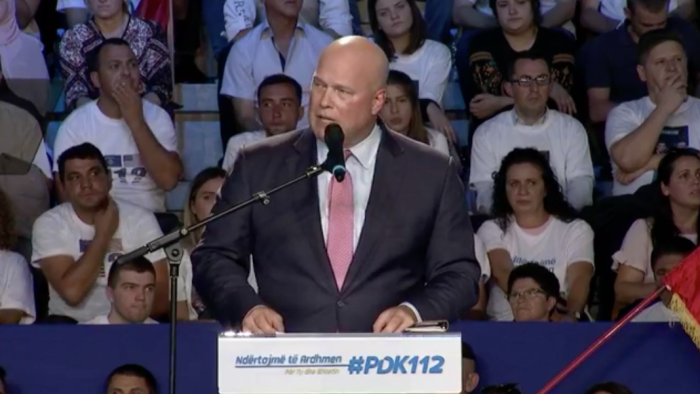 When Bleeding Heartland last checked in on former acting U.S. Attorney General Matt Whitaker, he had landed three new jobs: managing director of the Kansas-City based political consulting firm Clout Public Affairs, “of counsel” with the Graves Garrett law firm, and outside counsel for what CNN’s Kevin Collier described as a “not-top tier antivirus company.”

Last week, Whitaker campaigned for the ruling political party in Kosovo, a former province of Serbia.

Greg Walters of VICE News spoke for many when he asked in an October 2 article, “WTF Is Trump’s Former AG Matt Whitaker Doing in Kosovo’s Election?”

Whitaker was the featured speaker at an October 1 rally for Kadri Veseli, leader of the Democratic Party of Kosovo (PDK). An introductory video (starting around the 9:00 mark) highlighted Whitaker’s ties to President Donald Trump.

In his speech (beginning around 12:20), Whitaker highlighted the “strong relationship” between the U.S. and Kosovo, the idea that “actions speak louder than words,” and the need to bring in outsiders who can make government work for the people. He noted that Iowa has a sister-state relationship with Kosovo, and the Iowa National Guard has deployed in the former Serbian province. He described similarities between Veseli and Trump, whom he depicted as a change agent willing to challenge “the elites.”

Whitaker also discussed his experience in law enforcement, asserting that Veseli and the PDK were best positioned to fight corruption and thereby attract foreign investment to Kosovo.

Veseli shared videos featuring Whitaker’s speech and a photo of himself and Whitaker at a Burger King on his social media.

If you’re wondering why voters in Kosovo would care about a relatively obscure Trump ally, RFE/RL has the answer: “The United States is one of the biggest backers of Kosovo’s independence and political parties are keen to show strong U.S. ties to win votes.”

Though Whitaker did not explicitly say Trump wanted the PDK to win, the implied endorsement was clear enough for the U.S. embassy in Kosovo to release a statement on the day of the Whitaker rally to reinforce its previous neutrality pledge: “The U.S. government does not endorse or support any political party or candidates in this week’s election. We respect the right and responsibility of the voters of Kosovo to choose their future.”

Former Trump campaign aide Sam Nunberg appears to have orchestrated Whitaker’s travel to Kosovo. Radio Free Europe/Radio Liberty was first to report on October 1 that the PDK agreed to pay Nunberg $110,000 to provide services including speechwriting and “communications advice” during the campaign.

It’s not clear whether Whitaker is being paid by Nunberg or by anyone in Kosovo. I was unable to find any foreign agent registration form in Whitaker’s name. (Nunberg’s foreign agent registration filing is here and does not mention other consultants or firms to be involved in the work.) Walters was unable to get any comment from Clout Public Affairs, its parent company Axiom, the State Department, or the U.S. embassy in Kosovo.

Whitaker is scheduled to headline a Woodbury County Republican fundraiser in Sioux City on October 18. Here’s hoping some enterprising journalist will have a chance to ask who invited him to Kosovo, who wrote the speech he delivered, and who footed the bill for his expenses.

RFE/RL’s Balkan Service reported on October 7 that the PDK, “which has dominated politics for the last decade,” finished third in the October 6 election. Two opposition parties are poised to form the next government. To his credit, Veseli conceded defeat once it was clear his party had lost power.

“We didn’t win,” Veseli said. “Citizens have given their verdict and we accept it. PDK will go into the opposition and we will continue to serve the nation and the state.”

Trump’s former attorney Michael Cohen has speculated that the president would refuse to leave office peacefully if he loses the 2020 election. Political analysts Daniel Block and Joshua Geltzer, among others, have argued persuasively that Americans need to prepare for that scenario.

P.S.–The same day Whitaker appeared at a rally in Kosovo, George Papadopoulos, one of the first people charged in special counsel Robert Mueller’s investigation, headlined a fundraiser for the Scott County Republicans in Bettendorf. As Bill Lukitsch reported for the Quad-City Times, Papadopoulos offered various conspiracy theories about the Obama administration and a so-called “coup d’etat” against Trump.

Top image: Screen shot from video of Matt Whitaker speaking at an October 1 rally for the Democratic Party of Kosovo.