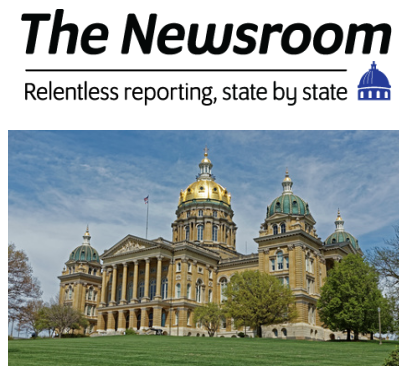 The number of reporters assigned to cover state governments and legislatures has declined sharply over the past two decades, and Iowa has not escaped the trend. But a nonprofit entity focused on statehouse reporting will soon open an Iowa affiliate, with a veteran political journalist at the helm.

Kathie Obradovich announced on October 21 that she will soon leave the Des Moines Register to become editor-in-chief for the Iowa affiliate of States Newsroom. That North Carolina-based nonprofit currently operates twelve other nonprofit state affiliates, with the goal of providing a “relentless stream of quality reporting and commentary” about state-level issues.

Obradovich has been with the Register for sixteen years, moving from political editor to political columnist in 2009 and to opinion editor in 2018. In a public Facebook post, she said leaving was “a hard decision,” adding,

I see this new job as another way to support community journalism, which I’m passionate about. Iowans will benefit from having more experienced journalists keeping an eye on their government.

That’s for sure. The Iowa House and Senate press galleries have regularly had empty seats in recent years. The Des Moines Register has fewer reporters assigned to state government coverage full-time than it did ten or twenty years ago. The Associated Press, which provides content for a large number of Iowa newspapers and broadcast media, also has a smaller staff on this beat. While the AP used to bring on an extra reporter on a temporary contract to cover the Iowa legislative session, the wire service made do with just one journalist at the capitol in 2019.

States Newsroom has not yet revealed the name of its Iowa affiliate. Obradovich confirmed in her Facebook post, “The content will be free online, including to other news operations that want or need to bolster their coverage of state government news.”

Chris Fitzsimon, director and publisher of States Newsroom, told Bleeding Heartland via e-mail on October 22 that the Iowa affiliate “will have three full-time reporters in addition to” Obradovich and will probably employ some freelance writers too. He confirmed that most reporters working for his organization’s affiliates are credentialed in their respective states.

As for funding, the Newsroom has received past support from the Hopewell Fund, a 501(c)(3) nonprofit in Washington, DC. Fitzsimon told me States Newsroom will be its own 501(c)(3) organization, starting on November 1. “The Iowa outlet will be a project of States Newsroom and will accept reader support as we move forward.”

Three full-time correspondents will be able to cover a lot of what the Iowa legislature, governor, and state agencies are up to. The Wisconsin Examiner, a States Newsroom affiliate that launched in July 2019, publishes original content several times each weekday.

The Iowa Starting Line website has also expanded this year, adding four full-time political reporters to its staff in June and several more in September. So far, the new reporters have focused on issue-based and candidate coverage of the Iowa caucuses, federal or local campaigns, and members of Congress. After presidential candidates leave Iowa next February, perhaps some of Iowa Starting Line’s team will be reassigned to the state government beat.