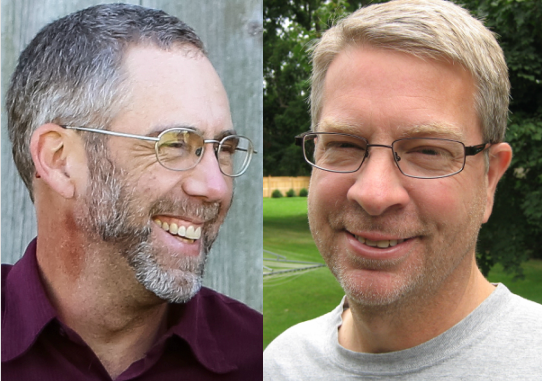 Clearly rates matter. Alliant’s are some of the highest in Iowa and throughout the Midwest. Their rates just went up in 2018, and the company has indicated in IUB filings that another increase is likely by 2021.

Community leaders see the growing energy burden on lower income households, and also on many businesses and industries. They experience the serious competitive disadvantage relative to communities served by MidAmerican Energy, whose rates are much more affordable. They also understand the “insult-to-injury” impact of corresponding efforts by Alliant (and MidAmerican) to steadily close the door on customer and community efforts to keep dollars local through energy efficiency and solar.

This rate case – and its impact on communities throughout Iowa – raises increasingly urgent questions about our economy-wide transition to clean energy: Who will garner the prosperity benefits of a clean energy transition? Will it be shareholders and executives of out-of-state monopolies or Iowa customers and communities?

The City of Decorah addressed this issue in its resolution (enclosed in full below), filed with the IUB in May. It states, in part:

WHEREAS, Alliant Energy has aggressively pursued legislation and regulation limiting the ability of customers and communities to save money and keep energy dollars local, including slashing the energy efficiency programs, working to overturn net metering, and creating and proposing separate classes and fees for distributed generation customers, and [...]

WHEREAS, Alliant Energy posted $457 million in profits in 2017 and has provided an 18.2% annualized return to its shareholders over the last five years. [...]

Now therefore, be it resolved by the Decorah City Council, the City of Decorah’s City Council stands in opposition to the proposed rate increase.

As the elected leaders of Decorah point out, while wealth is drained from our communities at accelerating rates, utility shareholders are doing very well.

The 21st century energy world, however, presents large and growing opportunity for customers and communities to reverse that wealth extraction model. For example, we have documented an estimated $14 million invested in clean energy (energy efficiency and customer-owned solar) in Winneshiek County in recent years, and with supportive policy, this is just the tip of the iceberg for every Iowa county.

To be clear, we need large scale, utility-owned renewables as part of a rapid clean energy transition. We also need ratemaking and related policies that minimize wealth extraction and prioritize the boundless opportunity for local investment in distributed energy resources and locally-owned clean energy prosperity.

Our organizations – Winneshiek Energy District and Luther College – have joined together with the City of Decorah and other local entities to intervene in the Alliant rate case. We have submitted extensive testimony from six expert witnesses, speaking on behalf of customers in all ratepayer classes.

Our testimony has challenged Alliant’s record-high rate increase as well as unwise tariff proposals. We have also respectfully asked the Board to consider a pair of principles central to the opportunity for clean energy prosperity in ALL Iowa communities:

2) The “natural” (state-granted) monopoly of electric service providers is subsidiary to the “first monopoly” of customers and communities, which includes the right to self-generate, to invest in energy efficiency, energy storage, or other “distributed energy resources”, and the right of Iowa communities to establish their own municipal utilities to provide energy services.

It is clear that local governments throughout Iowa are listening to their households, businesses, farmers, and institutions, and are taking a stand to reduce wealth extraction and accelerate locally-owned clean energy prosperity. We hope the Iowa Utilities Board is also listening, and ready to do the same.

Top photos of Andy Johnson (left) and Jim Martin-Schramm provided by the authors and published with permission.

Full text of resolution approved by the City of Decorah: 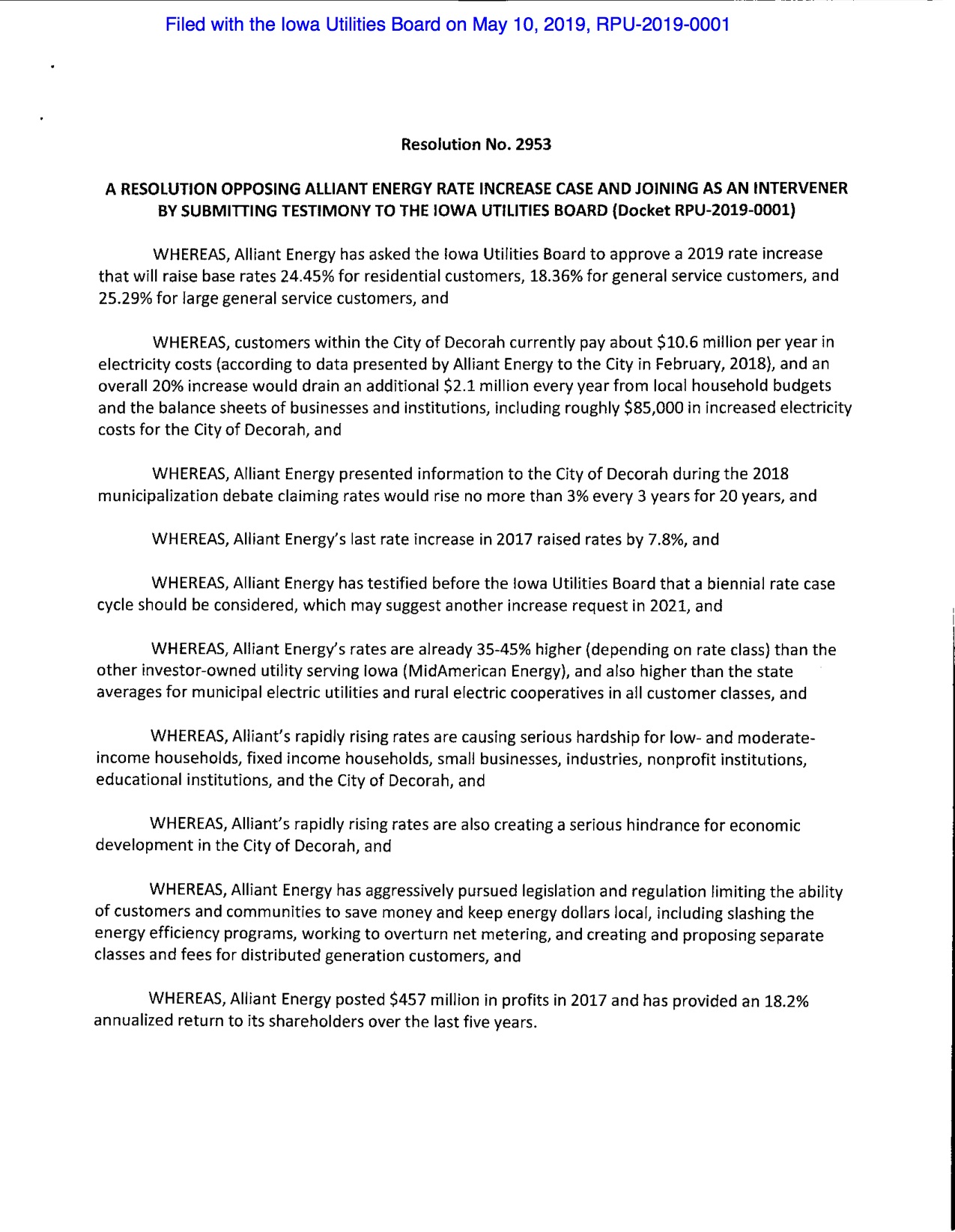 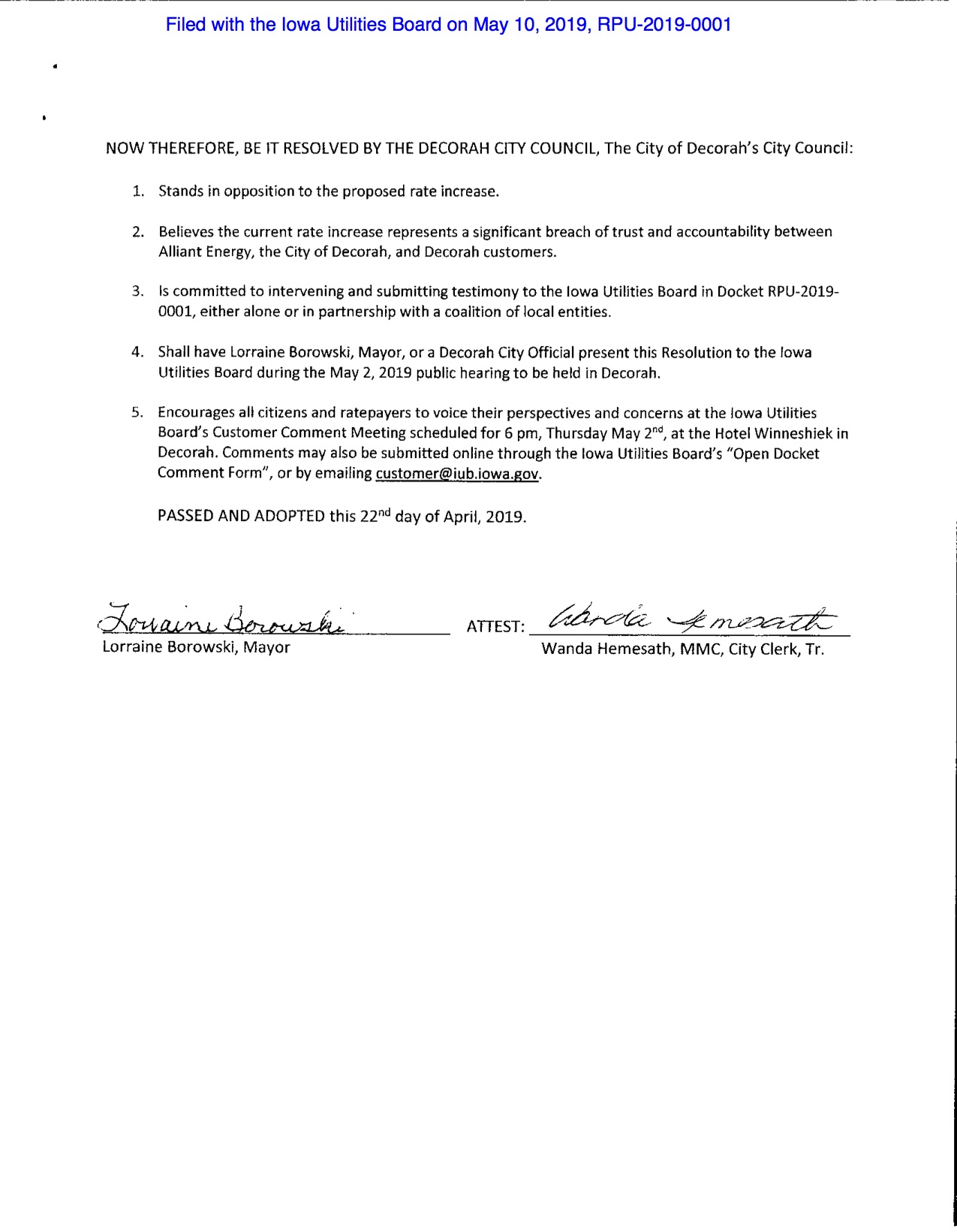