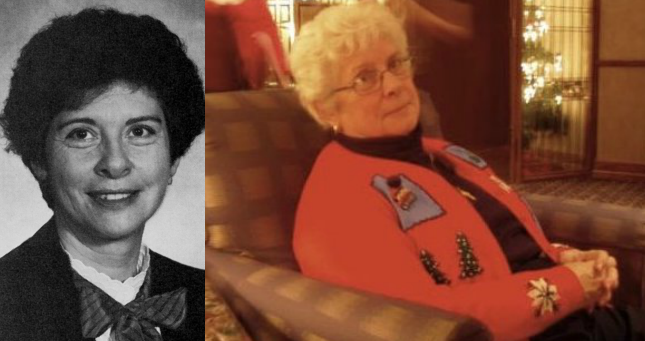 Jo Ann lived in Waukee and had been active on the school board. Her husband Tom is a Republican, and they had five children. Following her successful campaign and victory over an incumbent in 1982, she asked me to be her legislative aide.

My applications to teach fell through at that time, and I needed a job with two children of my own. So this was a perfect opportunity to work during the legislative sessions, which went from January to April or May (depending on whether it was an election year).

I was always impressed by how Jo Ann introduced me as her colleague, rather than aide or secretary. She even got coffee for both of us about half the time, if she got there early. She represented Dallas County from 1983 through 1986 and was a great asset to her constituents. She served on the Iowa House Education, Agriculture and Human Resources committees, and was vice chair of Human Resources, which dealt with health issues.

She was the only health expert in the Iowa House, having been a registered nurse and health planner as well as supervisor of a hospital’s maternity ward. (Editor’s note: Zimmerman was the first nurse elected to the Iowa legislature.)

She was instrumental in passing many bills, including legislation dealing with living wills and power of attorney for health care decisions. She was the mother of the ACCESS program, which allocated funds for computerizing library holdings. She helped pass a “Clean Air Act” and eventually no smoking in the workplace. She helped distribute Indigent Health Care dollars from the University of Iowa to fund prenatal clinics in every county. She funded gifted and talented programs and mandated supervisory education for principals. She pushed for child abuse and elder abuse laws, and generic medication, which saved money for consumers.

After that fourth year as her clerk, I finally got my teaching job and was thrilled she won the 1986 election for lieutenant governor. It was the last year Iowans elected the governor and lieutenant governor on separate ballot lines. Following a state constitutional amendment in 1988, those candidates ran on a ticket for each party.

Jo Ann and I kept in touch over all these years, exchanging Christmas cards and emailing at other times of the year. About two years ago, she noticed I was driving frequently to Chicago to visit my family and offered to let me stay at her home. I took her up on that as I knew we would catch up on political discourse. It was a most delightful time.

About a year ago, she came to Red Oak, where I now live, to speak to the local Indivisible Iowa group about the Democratic Activist Women’s Network. She was a co-founder of DAWN, which is similar to EMILY’s list and encourages Democratic women to run for office at all levels.

She tried to warn me she didn’t have more than a couple of years, or even months, to live as she was on oxygen 24/7 for her pulmonary condition. When my good friend Mark Lambert messaged me about her passing, I knew we all sadly lost an icon of Iowa. Mark was also a legislative aide, who sat in the row directly below ours. I will now be attending Jo Ann’s visitation and funeral this coming November 25 and 26 in Des Moines.

Janis Bowden is a retired band teacher who taught in the Des Moines Public Schools for 30 years. She is now a substitute teacher in Red Oak, where she moved in 2016.

Top image: Jo Ann Zimmerman in her official legislative photo on the left and more recently on the right.