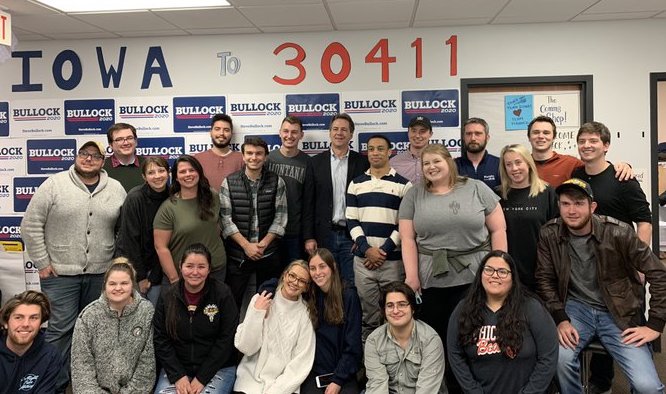 How to end a presidential campaign (and how not to)

Montana Governor Steve Bullock became the latest Democrat to end his presidential campaign on December 2, acknowledging in a statement that he “won’t be able to break through to the top tier of this still-crowded field of candidates.”

Like several others who have dropped out of the race, Bullock had a wealth of experience and was solid on many key issues for Democrats. He repeatedly vetoed abortion restrictions passed by the Republican-controlled legislature, yet somehow persuaded the majority party to expand Medicaid in Montana and take steps to limit the influence of dark money. He could have given President Donald Trump a hell of fight in a general election, having won re-election in 2016 even as Trump carried his state by 20 points.

No campaign fails for just one reason. But for Bullock and several others who left the field well before anyone voted, the Democratic National Committee’s debate qualification criteria were a crucial factor. Arbitrary requirements for individual donors and poll numbers guaranteed it would be extremely difficult for lesser-known candidates to reach a wide audience as the caucuses and primaries approached. In a recent analysis of Iowa caucus polling, Dan Guild pointed out that debates have been important for lower-polling candidates who made a late surge in past cycles.

While the DNC may have intended to limit the debates to candidates with a large grassroots base, they instead favored those with massive financial resources. They also forced campaigns to spend money inefficiently, seeking $1 or $2 contributions to meet donor targets. However this cycle plays out, the DNC needs to handle things differently next time.

But that’s not the point I want to make today.

Bullock’s state director Megan Simpson posted on Twitter that the governor came to Iowa to break the news in person.

.@GovernorBullock flew to Iowa yesterday to spend the day with this incredible team. What a way to spend your last day as a candidate. Very proud to be a part of #teamBullock pic.twitter.com/nMGJcf3A8H

Governor Bullock flew to Iowa and met w/ the entire staff yesterday to tell us personally he was ending his run. The Governor took everyone out for dinner and spent several hours w/ us. He has shared his personal email and cell phone number w/ all of the staff in case we ever need help. Governor Bullock did not have to do any of this. He could have phoned it in – literally. The moral of my story: Governor Bullock is a good man and I’m immensely proud to forever be a part of Team Bullock.

Beto O’Rourke provided a counter-example almost exactly a month ago. By several accounts, he had decided to end his presidential bid a couple of days before the largest Democratic event of the year in Iowa. Yet most of his staff were in the dark. He allowed them to work their hearts out preparing for the Iowa Democratic Party’s Liberty and Justice Celebration, putting out signs along streets and at a rally venue in a cold drizzle. Many campaign employees heard the news in a conference call as the story was breaking online. Some O’Rourke supporters had traveled long distances to cheer him on at the event.

Maybe O’Rourke had intended to make a splash by ending his candidacy in front of a huge crowd and television cameras, but opted to announce his decision a bit earlier after the news leaked. Whatever his reason, the timing was unacceptable.

I hope we haven’t seen the last of O’Rourke. His heart is in the right place, and he was one of the most talented communicators in a strong presidential field. But if he ever runs for office again, he should never do anything like that to his staff.

Top image: Photo of Governor Steve Bullock (under the red digit “0”) with his Iowa campaign staff, taken on December 1 and posted on Twitter by Megan Simpson, his state director.