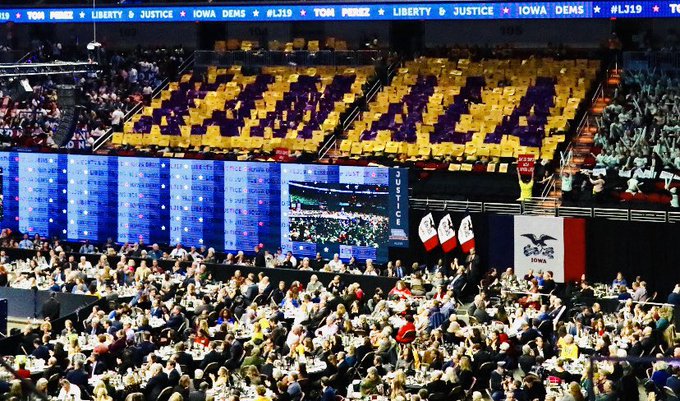 It's getting late for the lower tier in Iowa

What Dan Guild found after analyzing decades of Iowa caucus polling from this point in the election cycle. -promoted by Laura Belin

For candidates struggling nationally, Iowa is the last, great hope.

I have been on campaigns like those. You draw hope from stories of conversion. A vice-chair of a town committee announces their support, or a canvasser talks to someone who just converted from the front-runner to you. You think, just another debate, or a new set of ads. Then one fine morning, a poll will show...

That hope, if you win, is real enough. Examples include:

• George Bush upset Ronald Reagan in the 1980 Iowa caucuses. Within a week he was tied with Reagan nationally. Before Iowa, he had been in fourth place at 8 percent.

• Gary Hart finished second in Iowa in 1984. A week later, he rode that “strong showing” (16 percent of the Iowa delegates, 30 points behind Walter Mondale) to a surprise win in New Hampshire. Hart led Mondale nationally in one CBS poll three weeks after Iowa.

• In 2004, John Kerry rode a stunning win in the caucuses to victory in New Hampshire, where he had trailed Howard Dean by more than 20 points before Iowa. Kerry was at 8.5 percent nationally before Iowa, but after the New Hampshire primary, he took a commanding 47-23 national lead.

That history has led several candidates (most recently Kamala Harris) to close campaign offices in New Hampshire and pour more resources into Iowa. The bet certainly paid off for a nearly broke Kerry in 2003.

But even though nearly three months remain before the Iowa caucuses, it is getting late for the bottom tier.

A link to my Iowa polling archive, which informed this analysis, is here.

The data here are based on polling as close as I could find to November 1 in the year before the caucuses. In some early years (e.g. 1980) it was about a month later or earlier than that, but the basic point remains.

The history is pretty daunting for candidates under 5 percent at this point. Only three have even exceeded 10 percent in the caucuses. But there are two really important exceptions:

• Rick Santorum was at 3.5 percent among Iowa Republicans at this point in 2011. He didn’t break into double digits until December 18 of that year – barely two weeks before the caucus. He trailed three candidates at that point (Mitt Romney, Newt Gingrich, and Ron Paul) and was tied with Rick Perry. Rick Santorum never ran better than third in Iowa polling.

• Gary Hart was at 2 percent at this point in 1983, behind Mondale (46 percent), John Glenn (27 percent), and George McGovern (5 percent). Hart only got to 16.5 percent of the Iowa delegates, but that was good enough for second place. A debate performance in Iowa drove his late surge.

Are there any lessons here for say, the Amy Klobuchar or Kamala Harris campaigns? There are two, I think:

1. Both Hart and Santorum represented a distinct element in their party that was not being reflected in the leading candidates. Hart explicitly made his case on generation change – a powerful message in an age when the memory of John F. Kennedy was very strong.

Santorum rose because the leading candidates (Romney, Paul, Gingrich) all had issues with social conservatives, a very powerful community in the Iowa Republican caucuses. So the challenge for the lower-tier campaigns is to fill a gap that the leaders are not filling.

2. Debates matter a lot. Hart’s rise was largely based on a debate in Iowa. We have already seen in this cycle debates create bounces. For example, Harris had one after the first debate in June.

Were any of the current candidates to do that, they would likely see a pretty good bounce from the attention based on “exceeding expectations.”

I am sympathetic to the staff working day and night for candidates like Cory Booker, Julian Castro, and Klobuchar (though I think Klobuchar's chances are better than the others).

But the simple truth is they need a miracle in Iowa. And miracles for candidates below 5 percent at this point are rare.

Top image: Photo of the Kamala Harris supporter section at the Iowa Democratic Party's Liberty and Justice Celebration on November 1, posted on the Harris for Iowa Twitter feed.