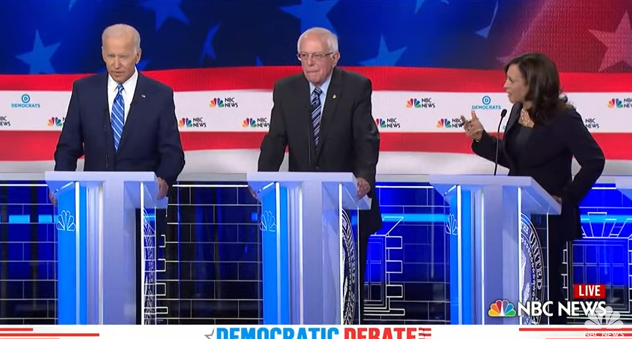 The first Democratic debate and Iowa: Biden in real trouble and a race remade

The above image and the accompanying story were national news within minutes of the end of the first debates. Kamala Harris attacking Joe Biden for his statements about busing and his praise for two old segregationist senators was the story of the June 27 event.

Less than a week later, the race in Iowa is remade.

A Suffolk poll of Iowans shows Harris vaulting into second. As we will see in a second, her attack touched on Biden's core vulnerability.

I wrote about a month ago that Biden would probably lose Iowa. I wrote that because for a front runner his numbers were very weak. (Ann Selzer, the pollster for the Des Moines Register, commented this week that Biden was "vincible.")

Suffolk is the first poll I am aware of to ask WHY they aren't for him. It is the most revealing data from polls in the last 6 months. Biden's problem isn't ideological (only 7 percent cited this), and it really isn't the other candidates (only 6 percent cited this). It is the sense that he is too old and that his time has passed.

This will be a hard perception to change. It is why I think Harris's attack resonated. It was not just the merit of the issue, it was that it was an issue from another time.

Biden can still win Iowa. There are other examples of front runners who fought back (Ronald Reagan in 1980 and John Kerry in 2004). There will be more debates, which Biden can use to address these core concerns.

What about the debate itself? Almost half watched some of the debates. It produced clear winners and losers. Harris and Julian Castro were both viewed as winners in the press after the debates, Buttigieg less so. Yet it is clear he made an impression. It is hardly surprising that viewers thought Biden did poorly. More surprising though is the reaction to Sanders and O'Rourke.

The debate absolutely moved Harris' numbers, who moved into second in Suffolk's poll.

Biden's numbers did not move, perhaps a reflection that the support he does have is reasonably strong (it may also be that his supporters are less tuned into the contest at this point. For Sanders the Iowa numbers are very worrisome. His decline was not just in his support.

Exit polling tells us most voters will not make their final decision until the last month. Nevertheless, the current state of the race must be a concern to both the Biden and Sanders campaigns. History has not been kind to candidates in their position.

Finally, the story of the race this far has been one of bounces. I would expect more than a few in the next 6 months. 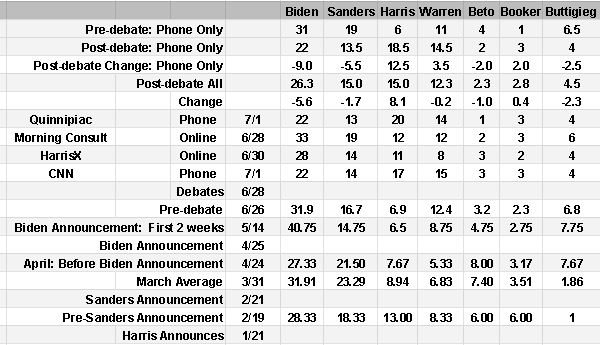 Another view of this year's bounces in the Democratic field: 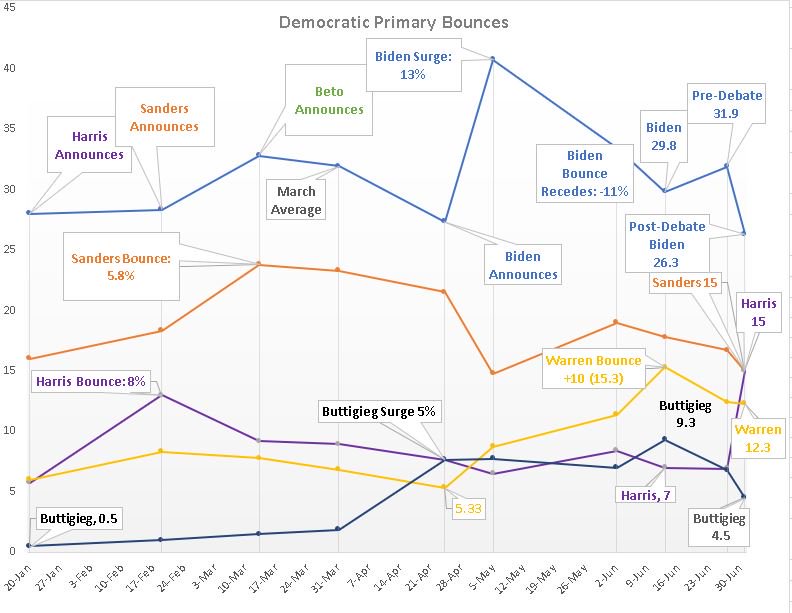