Dan Guild: “Pete Buttigieg has the lead now, but his share of the vote is the lowest in Iowa caucus history for a leader.” -promoted by Laura Belin

We are now 40 days from the Iowa caucuses. I wrote a piece here entitled “Let the buyer REALLY beware” 45 days before the 2016 caucuses.  That piece noted that front-runners rarely improve either the final percentage or their margin.  This short article follows up on my analysis from 2015.

First, a quick look at the state of the Democratic race.  A couple of things to note:

This chart includes the most recent Iowa caucus polling.

One thing worth noting: when you combine the Warren and Sanders numbers, they have been stable since June.  There is some evidence that the Biden+Buttigieg percentage is increasing, but that increase has been marginal.  You might think of this graph as representing the two “lanes” in Iowa, though politics is never that simple. 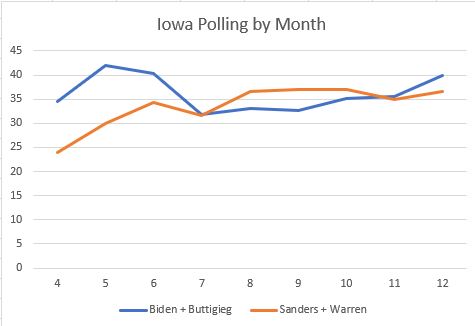 That is the history.  Some things to note:

This race is different: the lead is small, and the leader is a newcomer and not well known.

The parallels to Howard Dean in 2004 are obvious, though so too in a way are the parallels to Barack Obama in 2008.  Obama trailed only marginally in 2008. 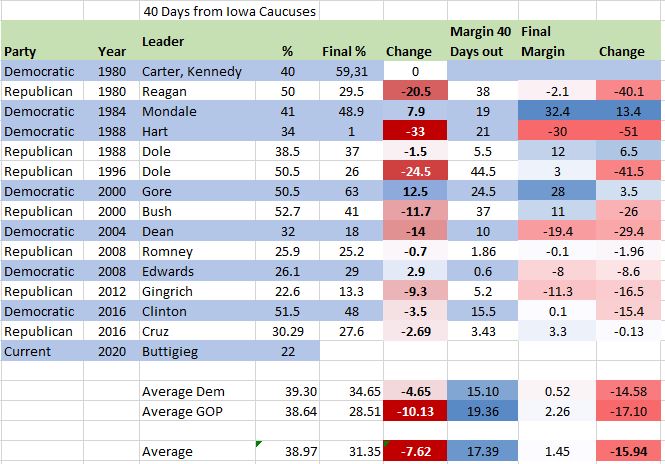 I will return to this subject closer to February 3.