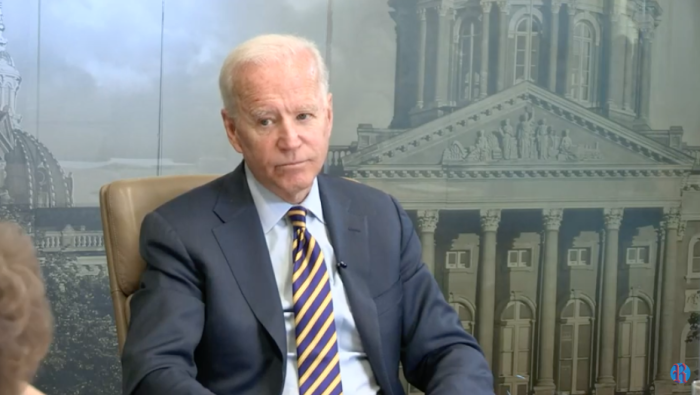 U.S. Senate Democrats are fighting to allow witnesses to be called in the coming impeachment trial of President Donald Trump. Speaker Nancy Pelosi is holding back the articles of impeachment approved by the House, pending agreement on the rules for conducting a Senate trial.

But the front-runner for the Democratic presidential nomination has blown up any leverage they had.

Former Vice President Joe Biden told National Public Radio earlier this month that he wouldn’t testify in a Senate impeachment trial, because “Everybody knows the issue here is not what I did,” and he won’t help Republicans “take the eye off the ball.”

He had a chance to correct the misstep during an interview with the Des Moines Register’s editorial board on December 27. Unfortunately, he dug in.

My transcript of the portion beginning around the 43:00 mark:

Register executive editor Carol Hunter: Do you stand by your earlier statements that you wouldn’t comply if you were subpoenaed to testify in an impeachment trial before the Senate?

Biden: Correct. And the reason I wouldn’t is because it’s all designed to deal with Trump doing what he’s done his whole life: trying to take the focus off him.

The issue is not what I did–not a single person, not one single person, even that thug [Rudy] Giuliani and his compatriots, have said I did anything other than my job. Every one of the people whose sworn testimony [who] worked for him said Biden did his job and he did it well. This is all about a diversion. And we play his game all the time. He’s done it his whole career. He’s done it his whole career.

And I’m very proud of the job I did. I never, never, never moved off of dealing with corruption there [in Ukraine]. Every single person thought that prosecutor-general should be fired, from the IMF [International Monetary Fund] to all our European partners, and the people in the administration. But this is a technique he uses all the time. He’s a chronic liar.

Hunter: Doesn’t that position you as if you’re defying a subpoena, putting yourself above the law?

Biden: Well, look. The grounds for them to call me would be overwhelmingly specious. So I don’t anticipate that happening anyway.

But what it would do if I went–let’s say I voluntarily just said, let me go make my case. What are you [the media] going to cover?

You guys, instead of focusing–you’re going to cover for three weeks anything that I said. And he’s going to get away. You guys buy into it all the time. Not a joke. Think about it. As we say in my church, examine your conscience.

Doesn’t mean I shouldn’t testify if you thought I should, but think what it’s about. It’s all about what he does all the time, his entire career. Take the focus off [himself]. This guy violated the Constitution. He said it in the driveway of the White House. He acknowledged he asked for help [from the Ukrainian president].

We all know calling Biden to testify would be a bad-faith move by Republicans to shift the focus from Trump’s wrongdoing. Nevertheless, a Congressional subpoena has the force of law. Defying a subpoena from Congress became grounds for an article of impeachment against President Richard Nixon.

The last thing Democrats need is for a leading presidential candidate to suggest a subpoena is optional.

The attorney who tweets as “nycsouthpaw” suggested a much better alternative.

“If I am given a lawful subpoena from the US Senate, of course I would comply with it. Every American has a duty to uphold our Constitution, even when we don’t agree with the people calling the shots. However, it’d be fruitless in my case. I have no relevant testimony to give.”

As other attorneys pointed out, Biden didn’t need to rule out testifying. Witnesses may not be called at all. (During President Bill Clinton’s impeachment trial, the Senate heard from no live witnesses, but three witnesses provided videotaped depositions.)

If Republican senators called Biden as a diversionary tactic, he could argue that he has no knowledge of Trump’s conduct. In the words of Armando, “everyone has a right to challenge a subpoena. There will be a forum and a process. What you don’t do is announce in advance that you will defy a subpoena.”

The guy whose main selling point is “I can beat Trump like a drum” just gave the president the perfect excuse to keep obstructing justice.

UPDATE: Biden clarified his remarks on Twitter on December 28.

But I am just not going to pretend that there is any legal basis for Republican subpoenas for my testimony in the impeachment trial. That is the point I was making yesterday and I reiterate: this impeachment is about Trump’s conduct, not mine.

The subpoenas should go to witnesses with testimony to offer to Trump’s shaking down the Ukraine government — they should go to the White House.

That’s a much better answer. It’s unlikely Biden would be called as a witness because the impeachment is about Trump’s conduct.

Top image: Screen shot from the video of Joe Biden’s December 27 interview with the Des Moines Register’s editorial board.