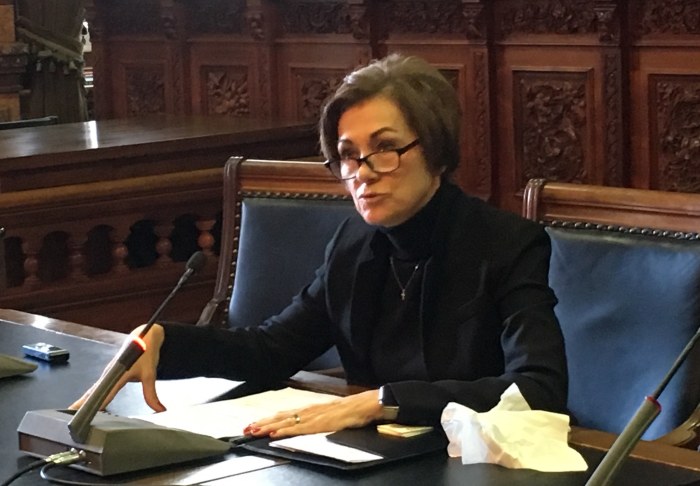 Iowa governor: "I'm not making any changes" to IPERS

Reynolds will soon appoint a successor to Donna Mueller, the longtime CEO of Iowa Public Employees’ Retirement System (IPERS). During the Associated Press legislative seminar at the capitol on January 7, Bleeding Heartland asked the governor what qualities she'll be looking for in that hire and whether she would rule out changes such as moving away from a defined-benefit system for future IPERS members.

"No, I'm not interested in that. I'm not making any changes to IPERS at this time," Reynolds said. Her communications director Pat Garrett later emailed reporters to say the governor "wants me to make clear to you all she meant to say, she doesn't plan to make any changes at all. " (emphasis in original)

A number of states have moved from defined-benefit public pension programs to defined contribution or 401(k)-like programs in recent years. Mueller's impending retirement after seventeen years running IPERS has increased anxiety among some current and former public workers that Republicans may try to privatize or restructure the program. The pension system has more than 340,000 members, about a third of them retirees.

The state is conducting a national search for the CEO position and accepting applications through January 13.

Reynolds said today her staff will be working with the IPERS board, which will review the submissions and refer a few names to the governor. Iowa law does not require IPERS representatives to recommend finalists for the job, nor does it compel the governor to select a candidate suggested by the board.

During the 2018 election campaign, Reynolds repeatedly promised not to alter the structure of IPERS after her Democratic challenger Fred Hubbell warned Republicans would take the current program away from future hires. In an October 2018 guest commentary for the Des Moines Register, the governor assured state and local government employees, "Under my watch, your IPERS is safe. It will not change; it will be protected; and you will have the retirement you were promised. Period." That column did not specifically pledge to preserve a defined-benefit pension for future hires, however.

LATE UPDATE: The governor appointed Greg Samorajski on March 31. From the news release announcing the decision:

DES MOINES - Gov. Kim Reynolds appointed Gregory Samorajski, former Deputy Commissioner of the Alaska Department of Revenue, as the next CEO of the Iowa Public Employee Retirement System (IPERS). Samorajski replaces retiring CEO Donna Mueller, who has served in that role since 2003. The appointment is effective May 1, 2020, and is subject to confirmation by the Iowa Senate.

“Protecting the retirement security of Iowa’s public employees, past and present, is a vitally important function of state government. I believe Greg Samorajski has exactly the kind of experience and temperament to do the job well,” said Gov. Reynolds. “Greg’s experience in institutional wealth management and in critical public sector pension roles will be so valuable to IPERS in the years ahead. I’m so grateful to Donna Mueller, who has ably led IPERS for 17 years and worked tirelessly on behalf of Iowa’s outstanding public employees.”

“Iowa has a strong legacy of effectively and responsibly managing its public pension system,” said Samorajski. “That is a public trust that cannot be taken lightly. It’s an honor for me to take the reins at IPERS, and I appreciate this opportunity to serve the people of Iowa in this way.”

Samorajski served as the Deputy Commissioner of the State of Alaska Department of Revenue from December 2018 through early March 2020 and is currently on assignment to the Department of Commerce to work on mitigating the economic impact of the Covid 19 virus. In his tenure as Deputy Commissioner, Mr. Samorajski managed the staff of the Alaska Retirement Management Board. He has lived in Alaska since 1997 where he worked first as a portfolio manager and Director of Investments for McKinley Capital. At McKinley he managed money for and provided service to large public pension plans and other institutional investors. Mr. Samorajski also served as Chief Financial Officer for the True North Federal Credit Union in Juneau, Alaska. Prior to transferring to Alaska, Samorajski served as Senior Economist and Manager of Financial Instruments at the Chicago Board of Trade, as an Investment Officer at the First National Bank of Chicago and on staff of the accounting firm of Deloitte Haskins & Sells. He has served on the faculties of the Illinois Institute of Technology and the Alaska Pacific University.