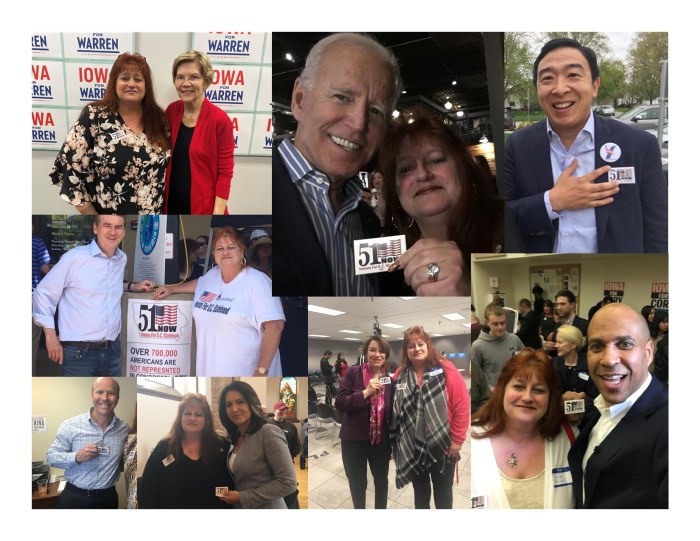 Why should Iowans care about D.C. statehood? The truth is, we always have

In 1978, when Congress put what was right for the American people over party interests, Republicans and Democrats came together on behalf of a large group of American citizens.  With the required two-thirds majority, they passed a proposed constitutional amendment to give full representation in both houses of Congress to the District of Columbia.

Republican Senator Strom Thurmond said it best: “The residents of the District of Columbia deserve the right to (full) representation in Congress if for no other reason than simple fairness."  Unfortunately, only sixteen of the required 38 states needed to ratify the amendment approved it, so it failed. Iowa was one of those sixteen states.

This should not come as a surprise.  Iowa has been on the right side, early and strong, on many important issues throughout our history, and this one is no different.

In 1992, Senator Tom Harkin was the first presidential candidate to include D.C. statehood as part of his campaign agenda. That same year was the first time opposition to D.C. statehood appeared in the national Republican platform. They said it went against the design of the Founding Fathers and the Constitution.  The national Democratic platform strengthened its language in support of statehood. That is when the divide between the parties on this issue grew.

Fast-forward to 2015 and Iowa stepped up again.  Iowans For D.C. Statehood started as a simple volunteer run issue group asking democrats to continue to show strong support in their platform,  reaching out to others across the aisle to have real conversations about their opposition and how to move the issue forward, and participating in events to reach less political, everyday Iowans to garner support.

Iowans For D.C. Statehood was the first organization to form outside of the District of Columbia to fight for the people’s right to representation and statehood.  They became a 501c(3) non-profit in 2019, joined by a talented board including President Dr. Selden Spencer, Treasurer Leann Riding, Secretary Jennifer Lunsford, Jacquie Easley, Kent Balduchi and Founder and Director, Tamyra Harrison.

2019 was an incredible year for the movement of D.C. Statehood, both in Iowa and nationally…

While 2019 was a hugely successful year, there is still a lot of work to do.  Iowans For D.C. Statehood has developed a platform resolution form, with everything pre-printed on an official form, for Democratic caucus-goers to take with them caucus night and submit for passage at their precinct.  Iowans from across the state will be submitting these to their precinct caucus on February 3.

As not just Iowans, but Americans, we must protect and uphold the rights of all our citizens. The caucuses give us a unique opportunity--as well as an obligation--to talk about important issues and bring them to the national stage during the presidential campaign, when all eyes are on Iowa.

A large-scale plan is being put in place for 2020 to educate and talk to people across the state, and in a variety of venues, in order to reach not only more Democrats, Republicans and independents, but also people who are not as politically active.  As support grows, one goal is for the Iowa Legislature to pass a resolution supporting H.R. 51 and once again stand in support of our friends in the District of Columbia.

So, why should Iowans care about D.C. Statehood?  Shouldn’t we all care?  Our friends in DC need more people, in more states, to stand up and say “We care!”

We care that more than 700,000 Americans are denied equal rights and representation!

We care that the budget and laws for the nation's capital are controlled by representatives in the House that do not live there and were not elected by the people of D.C.!

We care that 86 percent of D.C. voters supported statehood in 2016!

We care that veterans who live in the District of Columbia, and those who gave their lives for this country, do not have a star on the flag of the nation they fought for!

We care that as a nation promoting democracy around the world, letting this stand is a hypocrisy!

We care, because we’re Iowans!

We will build on this tremendous momentum to grow a nationwide, grassroots, bipartisan coalition and end this blight on our democracy.  Join us.