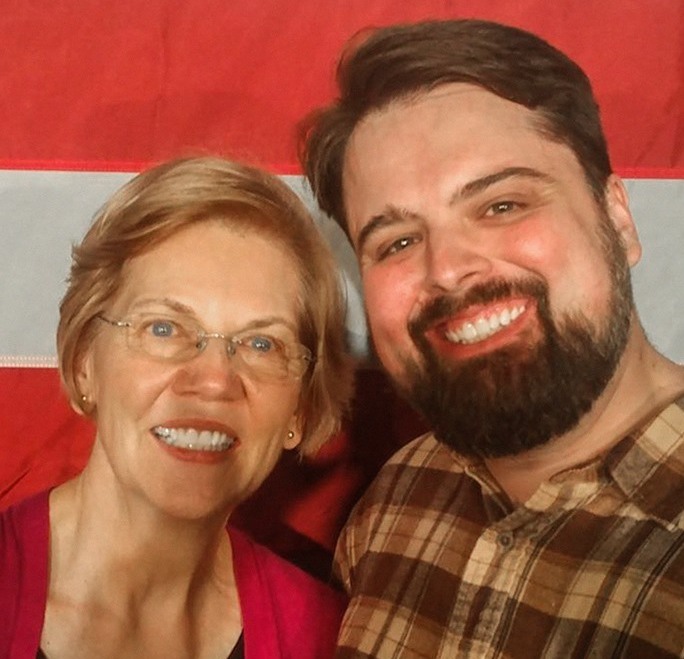 Erin Madsen is former candidate development chair of the Johnson County Democrats and a concerned citizen. He lives in Iowa City.

“What I’ve learned is that real change is very, very hard. But I’ve also learned that change is possible – if you fight for it.”
Elizabeth Warren

I attended Elizabeth Warren’s first rally in Iowa last January. I needed to see if she was the same Elizabeth Warren who explained the financial crisis to The Daily Show with John Stewart when no other program could, who pilloried bankers like it was her favorite hobby, and who stood shoulder to shoulder with Bernie Sanders (for whom I was a delegate and volunteer in 2016) on Medicare for All and a host of other issues which I care about deeply.

She had me with this:

“Washington works for the rich and the powerful and leaves everyone else behind. This is corruption, plain and simple. It is corruption and it is eating away at our Democracy and the very fiber of our lives… Understand the impact of this corruption. Whatever issue brought you here tonight, I guarantee it intersects through a Washington that is working for the rich and the powerful. We cannot do basic things most of us agree on. Why? Because we have [wealthy interests] calling the shots in Washington, not our Democracy… We need change, but not just one statute here, or one wall over there. That is not going to get the job done. We need big, structural change.”

I declared for her the next day. Now, one year later, I am more certain than ever that we need Elizabeth Warren. To put a finer point on it, only Elizabeth Warren has the brains, the heart, and the character to defeat Donald Trump and save the office of the Presidency as we know it.

The House of Representatives took its shot at impeaching Donald Trump and, despite unequivocal evidence and testimony of his guilt, the majority Republican senate will acquit him. Merely breaking the laws passed by Congress, enlisting a foreign government to investigate and subvert a political opponent, covering it up, intimidating witnesses, refusing to turn over evidence and obstructing the justice of Congress is insufficient cause to remove him from office.

By legitimizing Donald Trump’s crimes against the nation, by immunizing him from oversight or constraint, Mitch McConnell the GOP at large have joined the ranks of John Erlichmann, I. Scooter Libby and Michael Cohen. They have consented to a radical new vision of an all-powerful and unimpeachable Executive. It is unfathomable that Donald Trump won’t use this new immunity corruptly in the next election – everything he’s ever done guarantees it.

His path to power is being swept clean. His reelection is a near certainty. The past three years have been a prelude. And what comes next? A second term? A third? Reorganization of checks and balances? Renegotiating the Constitution? He is now the most powerful and influential human being in human history. With the might of the Armed Forces, the Justice Department and the other two branches of government entirely in his thrall, the only limits on Donald Trump’s power are his imagination and attention. His immense self-protecting power circles the globe. Air Force One is his personal vehicle of ambition and celebrity. He is now free to do so much more than just stealing an election and putting children in cages.

The whole world is watching us and wondering, just as we watch and wonder at each other, “can they be trusted to do the right thing?” Yes, we can, but not by playing his game. And not by us all playing our own individual games either.

63 million Americans voted for Donald Trump because he said he’d “drain the swamp,” back before anyone knew what he was capable of. Many of those Americans, not most but many, still want to drain the swamp, and for Donald Trump to go with it. Political corruption is the number 1 crisis of concern in America. It beats every other topic in every poll since Donald Trump was elected, across every age group, every political affiliation, every gender, every ethnicity, every religious identity. Americans in every direction – left, center and right – demand a leader who will take an honest stand against corruption – for us, for real, for once.

In order to actually challenge Donald Trump and the wholly corrupted powers of the Office of the President of the United States, a campaign needs more than just advertising, moral clarity, people power, polling data, donations, shoe leather or sandwiches. They need an innovative leader. Someone who is tough and progressive, but not a demagogue. They need to be brilliant, not to outwit Trump, but to outwit the vast and immensely funded teams of political professionals who serve him. They need to be tough enough to clap back at Donald Trump; to stop him in his tracks.

They also need to be strong enough not to fly off the handle when the decibel level rises. They need to shine a light on every single lie that Donald Trump tells. They need 2020 vision (heh) to unite a Democratic party that is still recovering from its worst fracture in a generation. In order to win the fight against corruption and its mascot, Donald Trump, I think we need Elizabeth Warren.

Elizabeth Warren isn’t a career politician. She is the too-poor-to-be-selfish, too-tough-to-be-dishonest country girl from Oklahoma who with brains, sweat, and guts became a teacher, a professor, a whistle-blower, a Presidential adviser, a Senator, and the leading voice against government corruption in politics today.

Like many Iowa Democrats (myself included), she knows what it’s like to grow up conservative and to have your eyes opened to the reality of injustice. Her campaign has won support from across the political spectrum by offering open hands and open minds instead of closed hearts and hot air.

She has united old-school Democrats, progressive activists, independents, and disillusioned Republicans with her vision of a government of the people, by the people, and for the people.

She alone has made fighting corruption her #1 priority from the very beginning. As a private citizen, she lobbied congress and Barack Obama to create a Consumer Financial Protection Bureau. When Obama needed someone to build it, she raised her hand said, “I will.” And she built it all in just 307 days – which has to be some kind of world record.

Do I need to mention the sheer brilliance of her plans and planning ability?

She has never backed down from a fight, and like the majority of women who run for office every year, she wins.

She has stood up and talked back to every man who ever told her sit down and shut up: Mitch McConnell, Donald Trump, the Masters of Wall Street, and even some of the Presidential candidates competing against her.

She believes in herself. She believes in us and she won’t give up because she knows what amazing successes we all could be if only we could unstack the deck against us.

She believes in a government for the people because that’s what enabled her to escape the poverty trap 50 years ago. And it would still be there if not for people like Trump who opened the trap wider and wider so that today 250 million Americans struggle under $14,000,000,000,000 of consumer debt – yours and mine.

Meanwhile, our national debt is another $23 trillion, which is $1 trillion more than the size of our economy. If we sold everything in the United States, including the land, for market price, we’d still be $1 trillion short. Have you seen what that money bought us? I haven’t. Do you know how we’re going to manage that Colossus that awaits? Elizabeth Warren does, because financial regulation and budget balancing are among her specialties.

The first day of Elizabeth Warren’s presidency will be the last carefree day of Donald Trump’s life and the last stop of the gravy train for Wall Street. Justice will be served and there is not a damned thing that Trump, or Mitch McConnell, or Wall Street, or the entire stinking swamp can do about it.

But much more importantly, it will be the day that we finally come up for air. The day we don’t flinch at the news or social media. The day we can all go to bed believing that tomorrow will be a little better.

Like always happens in Hollywood movies, we will be saved at the last possible moment and given another shot. It will be the most important shot of our lives. What will we do with it? What kind of country will our America be?

I have an idea of what it could be, but that’s just an idea. Elizabeth Warren has a plan – probably in several hundred large binders, color-coded, with indexes, full-color graphics, tabulated, annotated, paginated and laminated. You know, the sort of plan that’s ready to go. I’ll bet four years of paychecks that it works too.

I expect nothing less from her.

Top photo of Elizabeth Warren with Erin Madsen provided by the author and published with permission.