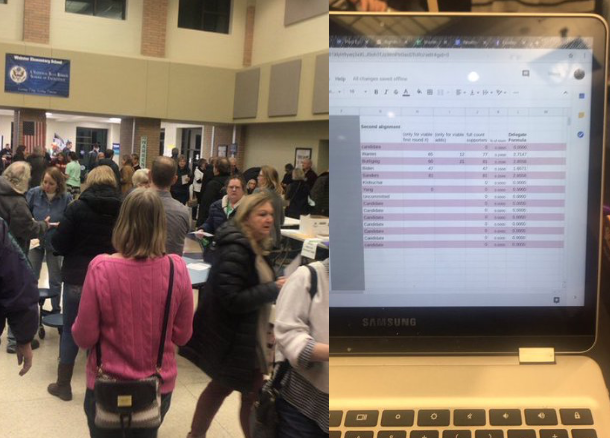 How close was Iowa? Florida 2000 close

Dan Guild walks through the math at the precinct caucus he attended, to show how small shifts can alter delegate counts. -promoted by Laura Belin

At this writing, with 100 percent of Iowa precincts reporting but an unknown number of precincts to be recanvassed, the difference between Bernie Sanders and Pete Buttigieg is 1.5 state delegate equivalents (564.01 to 562.497).

I don’t think any account I’ve read has adequately explained how close this was.

I should stress here that it makes far more sense to report the Iowa results by popular vote, rather than by state delegate equivalents. (Sanders led Buttigieg by 43,671 caucus-goers to 37,557 in the first alignment and by 45,826 to 43,195 after the final alignment.)

But most of the media are reporting the winner based on state delegate equivalents, a practice the Iowa Democratic Party has encouraged.

On caucus night I worked at Urbandale 9, a precinct in a Des Moines suburb with eleven Polk County convention delegates. The numbers looked like this:

Remember Sanders trails by only 1.5 state delegate equivalents across the entire state.

So what happens if we take seventeen votes from Buttigieg and give them to Sanders? Notice Sanders gets four delegates now versus only two for Buttigieg. The results in an additional 0.56 SDE’s for Sanders.

The result: Buttigieg’s statewide lead is cut by a third, to under 1.

Another scenario: let’s take one vote away from Biden.  In this case, he is not viable.  We know from polling that the vast majority of these supporters would have gone to Buttigieg. This is a pretty good guess based on that polling of what would have happened.

The result: Buttigieg’s lead goes up by 0.56 state delegate equivalents.

Again, my point here is not complicated.  If Buttigieg loses the state delegate equivalent count, it is very likely that one vote in Urbandale 9 might have made the difference.

Editor’s note from Laura Belin: here’s another example of how minute shifts in voter preferences can affect delegate counts. In my precinct (Windsor Heights 2), total attendance was 254, and the viability threshold was 38. Numbers after realignment were 62 for Warren, 61 for Buttigieg, 48 for Klobuchar, 43 for Sanders, and 40 for Biden. Because our precinct allocated seven Polk County delegates, they split two each for Warren and Buttigieg and one for each other viable candidate.

In past years, our precinct had only six county delegates. If that were still the case, each of the five viable candidates would have received one delegate and Warren would have gotten the sixth for having the largest group. Buttigieg would have been down by one county delegate (0.28 state delegate equivalents), despite having only one fewer caucus-goer than Warren.

Or, assuming my precinct has seven delegates, let’s say three fewer people had gone to Biden, making him not viable. Assuming most of his support had realigned to Buttigieg, the mayor could have received three of the Windsor Heights 2 delegates instead of two–adding 0.28 state delegate equivalents to his total.

Now consider what would have happened if Sanders had six fewer supporters in my neighborhood, falling just short of viability. Whether his supporters went mostly to Warren or mostly home, that’s 0.28 of a state delegate equivalent he would not have received from my precinct.

Top image: Photo of the February 3, 2020 caucus in Urbandale precinct 9 and digital photo of the caucus math worksheet provided by Dan Guild and published with permission