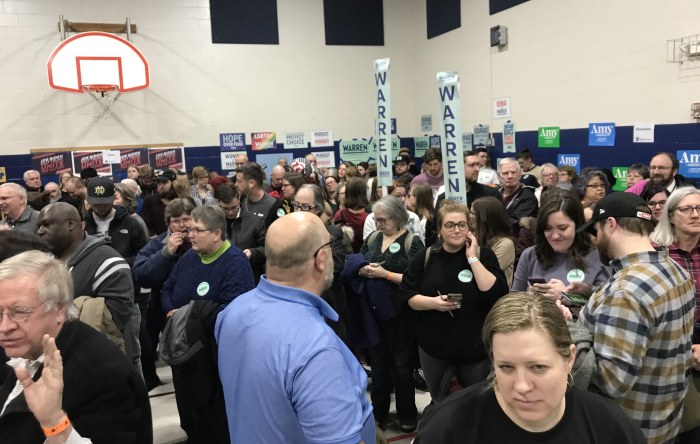 It needs to be said: Abolish the caucus

John Webb is a retired chef and currently a writer, organizer, and activist living in Des Moines. He has been active in the struggle for representation for more than 20 years. And yes, he showed up to caucus. -promoted by Laura Belin

I have a few confessions to make before I get into the meat of this essay. I am not from Iowa in any way. I moved to my wife’s hometown after she finished graduate school three years ago. Also, I have spent the past twelve months living and breathing presidential politics in one way or another. I have knocked doors and attended rallies and taken the requisite pictures. And yes, I hugged Cory Booker.

I have taken the responsibility of First in the Nation status seriously. I have loved the attention and experiencing things like the Iowa Democratic Wing Ding, Polk County Steak Fry, and Iowa Democratic Party’s Liberty and Justice Celebration. And I have come across a lot of good people, both volunteers and organizers, who supported many of the different candidates.

But it is time to either systemically alter the caucus system or do away with it entirely. I don’t really care about the first in the nation status. The caucus system is endemically flawed and disadvantageous to entire groups of Iowans. To claim that the caucus represents all Iowa Democrats is to ignore many of us.

And now it is time to address all of the feelings that the previous paragraph just provoked. I will lay out my argument shortly but I want to give all the Iowans reading this a chance to breathe through their pride in state and party and let the rising steam in their ears dissipate for a moment. Because the first in the nation status has been a bit of a sticky wicket around here for a few months now.

I want to divorce my analysis of the caucus system from the first in the nation status for a moment. Yes, I understand that New Hampshire has a state constitutional amendment and that even ranked choice voting looks too much like a primary to them. I also understand that loss of first in the nation status means losing approximately all of the access I have enjoyed this year and millions of dollars.

That being said, it is time to abolish the caucuses. They are often inaccessible and have many flaws that I think outweigh the benefits of the format.

The caucus system is great. As long as you can stand on a gym floor for hours. In February. In Iowa. Have a job that you can afford to be away from for three or more hours on a Monday night. Can arrange for child care or have older children who can come to the caucus with you.

And as long as you don’t mind standing in front of your neighbors publicly making your choice for presidential nominee be known. Or, in some cases, don’t mind sharing with your partner that you are casting wildly different votes. And don’t fear retribution from that partner later that night.

Or that you are confident that your public support for a presidential candidate won’t have any repercussions with your boss. Iowa is small. It is pretty easy to figure out who caucuses for whom in most of the state.

These are just a few of the problems with the caucus system. As evidence, I would point to the turnout historically and especially in 2020. I have talked to as many people who said that they wouldn’t or couldn’t caucus as I have supporters of any of the candidates.

I know that Iowans take pride in the caucus and the attention that they bring. I know that the traditional purpose of party building is Rockwell esque. But I would ask you how the platform proposal process went in your precinct. Were there any offered? Was there debate? How many were accepted or rejected?

The time has come to re evaluate the purpose of the caucuses and, indeed, the Iowa Democratic Party. Personally, I am a Democrat because I believe in lifting every voice. I spoke to too many Iowans who don’t feel the caucus system represents them. It needs to be said: abolish the caucus.

Top photo of Des Moines precinct 42 on realignment during the February 3, 2020 caucus provided by the author and published with permission.