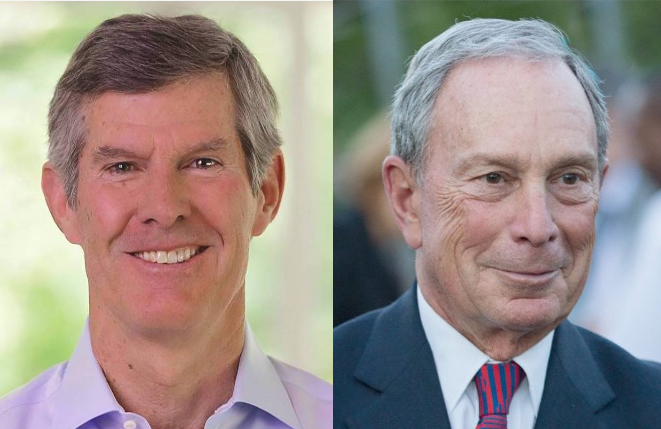 Iowa's 2018 Democratic nominee for governor Fred Hubbell and his wife Charlotte Hubbell initially stood for Mike Bloomberg at their precinct caucus in Des Moines, the couple confirmed to Bleeding Heartland on February 8.

Bloomberg got in the presidential race late and has mostly avoided the early nominating contests in favor of heavy spending on advertising nationally and in the fourteen states holding primaries on Super Tuesday (March 3).

Hubbell did not endorse a presidential candidate before the February 3 caucuses. I reached out after hearing secondhand that he had caucused for Bloomberg. The official results for Des Moines precinct 61, covering the west side neighborhood where the Hubbells live, show six people supported Bloomberg in the first expression of preferences.

Charlotte and I went to our caucus in an undecided mode. We chose to initially align with Bloomberg to show him some minimum support. On the realignment, Charlotte went with Amy Klobuchar and I went with Biden to help him become viable. Amy was already viable.

For us the most important thing is to elect a Democrat as President in November. The differences among the remaining Democratic candidates are much less important than the need to vote Trump out of office. We believe keeping Bloomberg in the race at this point is good for Democrats so we showed him some little Iowa support.

The ten Polk County convention delegates allocated in Des Moines precinct 61 split three each for Klobuchar and Pete Buttigieg and two each for Biden and Elizabeth Warren. Bernie Sanders was not viable in this precinct, which covers one of the capital city's wealthiest neighborhoods.

UPDATE: The Iowa Ethics and Campaign Disclosure Board database shows Bloomberg donated $250,000 to Hubbell's campaign shortly before the November 2018 election and $250,000 to the Iowa Democratic Party in September 2018.