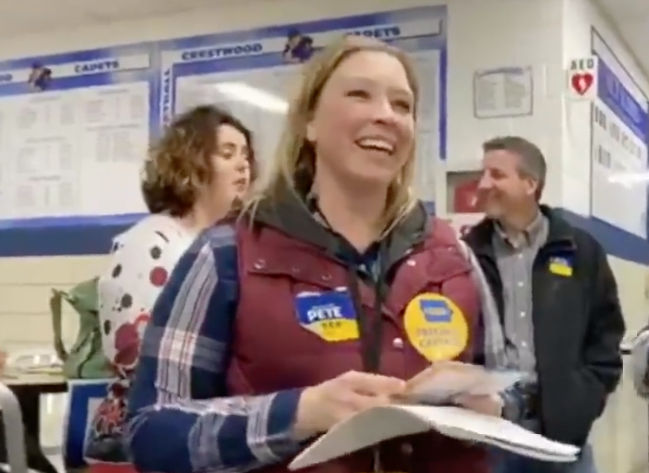 How many of us spent hours and hours training for this caucus? I did. I also asked all the precinct chairs in my county to attend meetings and mock caucuses over the many weeks leading up to the caucus.  All these wonderful volunteers spent time and energy learning and reading the booklet.  They all asked questions that were on point, and I am so proud of them all.

The night of February 3, we held the most organized caucus we had ever run in my county. At the end of the evening, as I went around collecting packets, I saw smiling faces and lots of real energy.  New faces and familiar faces, all thanking us for doing such a great job. I felt hope for November!

Then it started happening. …

The faces of the precinct chairs were pained and strained.  They started telling me they were on hold and they had been on hold for a long time.  “What should I do?” “I am tired and want to go home.”

Imagine telling an older woman to continue to stay on hold while her husband drove her home, only to have her call you more than an hour later to tell me she had finally just reported but that some of the tracking numbers did not match up. At that time, I was on my way home and had received a phone call that some of the precinct numbers from the voter rolls did not match up with actual precincts in my county.

I had to pull my car over and get out the math worksheets and voter rolls to go over the numbers and be told that it still wasn’t right.  It wasn’t the math it seemed, but the number at the top of the voter rolls.

So I thought, “OK, well I will head home and call with all the correct numbers.” That will fix it for here. I tried to get through but could not.  Finally they called me and I was able to give the numbers I had.  But three of the packets were still in the hands of precinct chairs who live further away.  I would have to call them at 1:30 in the morning over and over, until I got an answer, to tell them to call the Iowa Democratic Party. How embarrassing for all of us.

I cried. Even though I had not personally let these people down, I thought of how many times I had told them chairing a precinct caucus was going to be simple and easy.

How am I supposed to get these people to continue to support our county party, let alone the Iowa Democratic Party, if this turns out to be exactly what I think it is going to be? A disaster. All eyes on us. A shining example of why we should not be allowed to do this wonderful tribute to democracy. The caucus.

How much money went into this?  Some from our own pockets, some from the pockets of donors.  Wasted time and wasted effort.  What could have been such an uplifting and energy surging night turned into many nights of no sleep and a brain filled with every bad thought that could cross my mind.  The conspiracy theorists went on high alert. At first, I did not say anything.  Then I tried to calmly address the issues. Then I started unfriending and eventually blocking those who attacked me on social media.

On top of all that, one of the precinct captains for Pete Buttigieg in my county was filmed in an interaction with a voter who apparently had just found out that he is gay. [Editor’s note: the video is enclosed below.]

I happen to also work with the precinct captain, so I know the stress she went through as this video went viral, and every news outlet in the country (including Ellen) was on her like sharks. It was overwhelming. We work in health care, so the last few days have been very difficult to say the least. We have to be at our best, but she and I were struggling. Thank goodness for a great boss and co-workers!

The day after the caucuses, I gathered all the precinct envelopes and brought them to work. Glad I did, because it turned out that the state party was coming to pick up the envelopes with the worksheets and the sealed packets of precinct presidential preference cards. I thought, “Great, they will go through this and look at the cards and release the results.”

But no. Only the worksheets were reviewed. We heard the news that not everything could be released, because some of the envelopes had been mailed. We would have to wait. We also were told someone had released the caucus results call in phone number, so Republicans were tying up the lines.  Everything seemed ridiculous to me and I walked around my work place and in my town with my head down. People kept asking me, “What happened?”

As days passed, I became sad and even more frustrated as I watched the story unfold. A wonderful night–filled with thousands of volunteers who had spent months gearing up–was turned into a laughing stock for the nation. A disgrace of epic proportions. I will say that the media played its part in this, but they are not wholly to blame. They had a story and they ran with it.

Let’s also talk about the bitter conversations that have happened since last Monday. If we thought the feud between the “Hillary people” and the “Bernie people” was bad in 2016, hold on to your hats! The look of impropriety is so much worse.

I was a Bernie supporter last time around and backed Pete this time. All the conspiracy theories came flying out while waiting for the results. The Pete supporters could not fully celebrate a “win,” and the Bernie supporters were seeing this “getting stolen from them again.”  Social media was afire with hate, vitriol and downright rudeness. Not all, but much of the hostility could have been avoided if the app or phone lines had worked.

Where do we go from here? I had almost convinced myself that the caucuses belonged in Iowa. And I still cherish them, because they offer people a chance to show up and support their candidate in the most visible way possible. The caucuses show that people in Iowa take the time to study the candidates, ask questions, and choose whom they align with. We have cities, small towns, rural areas, and industrial areas. We don’t have the most diverse population–I get that. And I think that it hurts us on the national stage when it comes to picking a candidate.

I am guessing this was our last straw. I was glad to be part of what was one of the most successful and organized caucuses in my county. I’m sad to see it go if it leaves.

But I don’t see how we can continue to be first if we act like we are last. So many really great people were not able to attend the caucus because of time, travel, age, or ability. Let’s just say it. The caucus does not represent a majority of voters here in the state. And yes, the results may have been different if everyone who wanted to participate were able to.

The jury is out. But I think that we just lost it.

Video of an interaction at the February 3 caucuses in Howard County between Pete Buttigieg’s precinct captain and a voter who wanted to withdraw her support after learning that Buttigieg is married to a man.

Top image: Screen shot from a video of a Buttigieg volunteer trying to convince a homophobic woman to stick with her candidate at the February 3, 2020 caucuses.