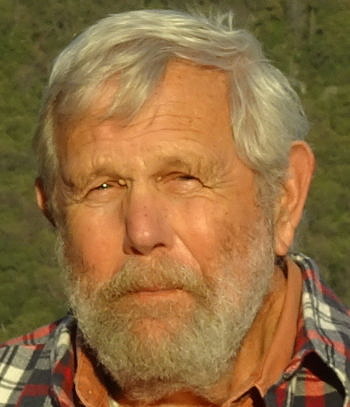 As my life’s journey winds down, I often wake at night and mull over the wonderful life this world, my country, my state, my community, and my friends and family have given me.  Music has been an important part of my life.

The gospel songs I learned in church, the country and western and pop music of the 1950s came first. Then came classical music.  Tchaikovsky’s violin concerto in D – tense, boisterous, serene. It could be the theme music of my life. Or the theme music of the 300-year-old white oaks in our woods. Or of the Monarch butterflies that stop by our prairies in fall and feast on the nectar of the late-blooming asters before the north winds send them on a wild ride to their winter hangouts in the Sierra Madre mountains in Mexico.

My father was a minister and didn’t care much for my music. But he seemed to like This Old House.  I learned later that Billy Graham had met Stuart Hamblen, and Hamblen had been "born again" about then.

Does This Old House fit? When our son and his family moved back to the farm, we put together our retirement house. It consists of an abandoned 1931 cedar log cabin from the Boundary Waters area in northern Minnesota, an 1853 log house discarded by neighbors, and a small timber frame using red oak from our woods that Nature abandoned by allowing them to succumb to oak wilt.  Our house is old but beautiful, so “ain’t a gonna need this house” doesn’t fit.

Perhaps the metaphor could be applied to our farm? Our farm first became private property in 1853. It’s had six different owners before us: first they were Yankees, then Irish, then Norwegian, then German, then English, then Bohemian, now Swedish. We made it our home 45 years ago, raised our family, planted thousands of trees, and healed 22 gullies.

In 1858 Walt Whitman added a poem to his Leaves of Grass called “Oh, Democracy." In it he wrote that we should plant companionship as thick as trees along every river in America. We have done that along our section of the Upper Iowa River.  No, the metaphor doesn’t fit: our farm is now healthier than when we took possession of it.

Maybe This Old House applies to our community?  When we moved to our farm near Decorah, a few friends established a food co­-op in a corner of Ole’s Swap Shop. Today Oneota Food Co-op occupies the old Fareway store on our main street. It has more than 5,000 members, and more than 30 percent of the food it sells originates within 100 miles of Decorah. Luther College and our Community College are outstanding, our public schools and Catholic schools are top-notch, and our county and city governments represent us well. No, the metaphor doesn’t fit.

Does the metaphor apply to our state? We have a host of problems, but two in particular concern me greatly.

We seem to be overwhelmed by institutions and our elected officials who continue to deny/delay human-caused climate change.  Many of us have seen flocks of starlings, sometimes thousands of them flying as one.  There is a name for this starling phenomena: it’s called murmurations. Too many politicians and dominant organizations in our state act like starlings.

I saw an ad on TV the other night. It showed a fellow driving his bright new car out of the city into the countryside. He stopped on a ridge top, got out and watched a flock of starlings sweeping across the landscape. Suddenly one bird broke from the crowd and flew straight up. The car company that produced the ad is now boasting about going all electric soon.

While watching that commercial, I couldn’t help but wish our political leaders, our agriculture leadership, and all of our evangelical churches (my heritage) could be three birds that leave the murmuration.  Abraham Lincoln, about whom Republicans seem justifiably proud, once said, “What is morally wrong cannot be politically correct." Our nation, nay the world, needs an example of an agriculture state that puts climate change denial and delay behind us. Iowa is chock full of decent, bright, capable scientists and citizens who can help us with this task.

When we reorganized Iowa state government in 1986, I added the words “and Land Stewardship” to our Department of Agriculture.  When I did this, Governor Terry Branstad sent a message to me that he was uncomfortable with the word “stewardship” because “it’s a religious concept." So should we get rid of “in God we trust” and “one nation under God”?  C’mon, Gov. A couple years back one of my granddaughters taught me a new word: “Duh."

In my youth I sat through many of my father’s sermons – Sunday morning, Sunday night, and Wednesday night prayer meetings.  There is one idea among the many I heard that has influenced my life above all others. That idea is stewardship. The word “stewardship” that I attached to agriculture was not meant to be just a nice platitude. And I used the word “Land” in the Aldo Leopold sense – soil, water, air, plants, animals, and people (our home place).

Our species – Homo sapiens – began the transition from hunter-gatherers (i.e. harvesting nature’s bounty) to agriculture (i.e. domesticating nature) twelve thousand years ago.  That’s about 600 generations ago.  Over the 45 years I’ve been farming (that’s two generations), we have witnessed monumental changes in agriculture.  We have de-coupled animals from land, we have de-coupled people from animals, and we are rapidly de-coupling people from land as well.  Family farms are giving way to industrial agriculture.

Was our governor right?  Does the concept of “stewardship” only belong in religion?  Will our relationship to land be defined only by regulations rather than a land ethic? Will it be seen as a limit on our freedoms rather than a positive act?

I hope not. My home state is better than this. The flickering light of land stewardship is not completely gone yet. Iowa is filled with fantastic farmers and organizations promoting stewardship. Think Practical Farmers of Iowa, now 3,700 members and growing. Google them.

“Ain’t got time to oil the hinges, nor to mend the window panes." Two mechanical valves were installed in my heart thirty years ago. They have now opened and closed a billion times and are well past their warranty. Cataracts have been removed from my eyes and yet my window panes are getting foggy again. “Ain’t a gonna need this house no longer, I’m getting ready to meet the saints."  But hopefully not real soon.

There’s Dad’s voice, coming from up yonder. “Paul, you preach too much, time for the benediction." But just one more thought: I have three wonderful kids, and with their partners I now have six amazing granddaughters. Science tells us that they have part of me in them that will carry me on.

“My life goes on in endless song; above earth’s lamentation, I hear the sweet, tho far off hymn that hails a new creation;  How can I keep from singing.” (Robert Lowry, 1868) “And I think to myself, what a wonderful world." (Louis Armstrong, 1968)

Top photo of Paul W. Johnson provided by the author and published with permission. He can be reached via email at paul@oneotaslopes.org.