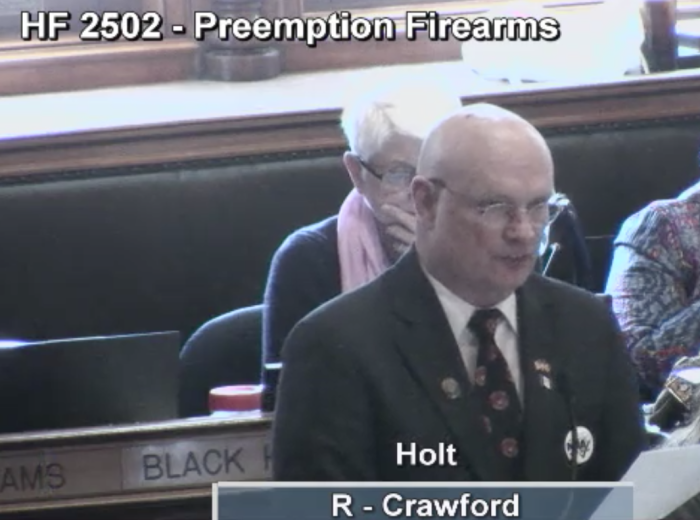 Iowa Republicans, once known as the party of "local control," have yet again voted to take authority away from city and county governments—this time, when it comes to regulating firearms accessories and storage, or trying to keep guns out of public buildings.

This bill has extra appeal for Republican lawmakers who have already passed expansive pro-gun legislation and approved a state constitutional amendment to make gun regulations almost impossible to sustain in court.

House File 2502 would prevent any local "ordinance, motion, resolution, policy, or amendment" regulating firearms attachments or modifications, or the storage of weapons or ammunition. Up to now, local governments have been forbidden from adopting ordinances regulating gun ownership, possession, transfer, transportation, or registration, but not certain accessories or storage.

The bill would allow local governments to restrict weapons in public buildings only "if adequate arrangements are made [...] to screen persons for firearms or other dangerous weapons," and if armed security personnel are posted inside the buildings. In other words, no signs declaring that weapons are not allowed unless the city or county government also pays for metal detectors and armed guards on the premises during opening hours.

Judicial branch restrictions on weapons in county courthouses would become "unenforceable unless the judicial order applies only to a courtroom or a court office, or to a courthouse used only for judicial branch functions." Many counties, especially smaller ones, have other government offices in courthouse buildings.

The least impactful section of the bill is at the beginning. It would prohibit city or county governments from subjecting shooting ranges to any zoning or usage rules that are "more stringent than those imposed by state law."

The only entity with a lobbyist registered in favor of the bill is the Iowa Minuteman Civil Defense Corps. Nearly two dozen organizations are lobbying against the bill, representing local governments, law enforcement, gun safety advocates, non-profits concerned with public health, or religious organizations.

A "HUGE GOVERNMENT OVERREACH" AND A "SAFETY CONCERN"

State Representative Mary Wolfe noted that the legislation would block local policies as well as ordinances. "Pre-empting local governments from passing local laws that are inconsistent with state laws is a proper use of pre-emption powers" vested in the legislature, she argued. But this language "far exceeds" that authority.

Policies are not laws. Policies are not ordinances. A person who violates a policy cannot be jailed, cannot be fined. Policies reflect the values of a local government, and more specifically, the values of the citizens that the members of the local government represent. Again, they are not laws, they are not regulations, they have no legal binding authority on their constituents.

State Representative Mary Gaskill recalled that as Wapello County auditor before she served in the legislature, "one of my many responsibilities was the overall security of the courthouse and county offices." Gaskill coordinated with the county sheriff's office and the county supervisors. This bill "takes that authority away." State Representative Tim Kacena defended the principle of local governance as well. Citizens elect leaders, and “It should be up to the local administrators to make policy for their community."

Gaskill described the bill as "a safety concern" as well as an attack on local control. "I worry about the consequences of having additional weapons in the courthouses"--for instance, during tax season, when county treasurers have more cash on hand. Few entities could pay for metal detectors and armed guards.

Other speakers worried the costs would be prohibitive. State Representative Wes Breckenridge said he had met with the Jasper County board of supervisors and county auditor, as well as some mayors in his district, to get their input on House File 2502. They expressed concern about another "unfunded mandate" from state government and anticipated needing to raise property taxes to pay for security they deemed essential. Breckenridge said he has a concealed carry permit and wants "to be able to carry my weapon everywhere that I can." But he also recognizes the responsibility of duly elected local officials to make decisions that are right for their communities.

Some might say, "simply let the weapons in," Breckenridge acknowledged. Then smaller counties won't need to pay for screening or armed guards. The challenge is that if the judicial branch in their county demands security for the courthouse, the county will have no choice but to find funding for metal detectors and additional guards.

State Representative Beth Wessel-Kroeschell, who represents part of Ames, said Story County cannot afford to have the metal detector in its courthouse staffed, because the estimated cost would be $410,000 per year. She pointed out that many government buildings have more than one door, adding to the expense of installing metal detectors.

House File 2502 would go far beyond regulating gun-free zones in courthouses, Wessel-Kroeschell observed. It would in effect prevent gun-free zones in public libraries and some 60 public hospitals across the state. "People get a lot of bad news in hospitals. We are very emotional when we're in hospitals," she said. "Is this really where we want to see firearms?" Some counties run mental health facilities, she added. Dubuque has a public nursing home.

The starting point for Wessel-Kroeschell was that "The constitutional right to own a firearm comes with important responsibilities regarding community safety and therefore must come with conditions."

"I WOULD ARGUE THIS IS A MORAL OBLIGATION"

The bill's floor manager, Republican State Representative Steve Holt, argued that the legislature needs to act. "A patchwork of ordinances and regulations varying from county to county or even city to city within a county would make it nearly impossible for law-abiding citizens exercising their Second Amendment rights to know if they are legal or not as they travel" around Iowa.

If a local government wants to restrict citizens' Second Amendment rights in any building, they must pay for additional security, because they will have "removed a major portion of the right of self defense" for those entering the restricted area.

I would argue this is a moral obligation, since the political subdivision has denied a God-given right, and it should be a legal responsibility as well. House File 2502 makes it so.

I'm not aware of any scriptural support for a "God-given" right to carry firearms anywhere, let alone in public buildings. Governments all over the world regulate possession of deadly weapons. There is no consistency even among countries where the population is predominantly Christian. Holt's rhetoric is a good example of how some Republicans invoke God to bolster their own political preferences--as if anyone could presume to know how a deity feels about guns in courthouses or hospitals.

For Holt, gun-free zones are dangerous, and the bill is a remedy to assure the public's freedom, liberty, safety, and welfare. It will assure citizens' "right to self-defense against sick individuals that would kill innocent people."

Regulating Second Amendment rights on the state level will ensure that Iowans who carry firearms are not subject to a "labyrinth of different ordinances and mandates."

To no one's surprise, the 52 Republicans present voted to approve House File 2502. The unified Democratic vote against the bill was less of a foregone conclusion. Some House Democrats have crossed party lines to support past pro-gun bills. This proposal's assault on local control was a bridge too far even for them.

A Senate Judiciary subcommittee is scheduled to consider the legislation on March 4.