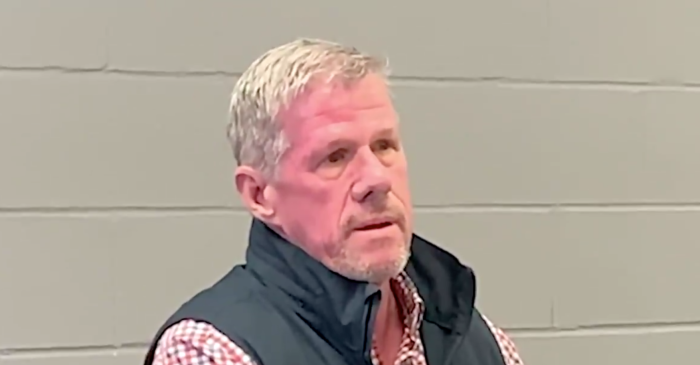 Republican State Senator Brad Zaun has declined to clarify whether his proposed 72-hour waiting period for all abortions would also apply to people needing a common medical procedure after a miscarriage.

At a political forum in Grimes on February 21, Zaun told a constituent who asked about miscarriages that his bill calls for a "72-hour ultrasound before any abortion is performed."

Zaun has long been a leading advocate of anti-abortion legislation in the Iowa Senate. This year, he introduced Senate File 2215, which would reinstate a 72-hour waiting period for all abortions at any stage of pregnancy, along with other requirements related to ultrasounds and information physicians must provide before performing any abortion.

The Iowa Supreme Court ruled in 2018 that a 72-hour waiting period for abortions violated women's due process rights and equal protection guaranteed under the state constitution. But three of the five justices who concurred in that opinion no longer serve on the court, and a fourth is retiring this week. Zaun told Iowa Public Radio last month that he reintroduced the restriction because "we got a new court,” and "I believe in this bill, and I can file any bill that I want."

Although the draft states that the waiting period provisions "shall not apply to an abortion performed in a medical emergency," it does not distinguish between elective abortion and spontaneous abortion (the medical term for a miscarriage). The bill defines "medical emergency" as "a situation in which an abortion is performed to preserve the life of the pregnant woman [...]."

Many people who miscarry need a D&C (dilation and curettage) to clear remaining tissue from the uterine lining. Typically, doctors are not performing that procedure in the context of a "medical emergency"--though life-threatening septic infections or other complications can develop if the D&C is postponed for too long after the fetus has died.

When an Iowa Senate Judiciary subcommittee considered Zaun's bill on February 18, Senate Minority Leader Janet Petersen grilled her Republican colleagues about whether the ultrasound and waiting period would apply to all Iowans having a miscarriage. I've transcribed part of that exchange below.

After watching the video Iowa Senate Democrats shared from that subcommittee, Urbandale resident Julie Witthoff decided to attend a forum organized by the Grimes Chamber & Economic Development on February 21. No one put her up to going. In a telephone interview, she told me she wanted to ask Zaun about this bill because she had had several miscarriages as a young woman.

The Iowa Senate Democrats recorded the event and released part of Witthoff's Q&A with the senator.

Sen. Brad Zaun is pushing for a 72-hour waiting period before an abortion. This would force a woman who has had a miscarriage to wait 3 full days to get the procedure she urgently needs. Donate today to stop Senator Zaun.

Woman's voice: So a woman having a miscarriage that needs to have a D&C would have to have an ultrasound, intervaginal or otherwise, depending on how far along she was in her pregnancy, and wait 72 hours before she could have this medical procedure.

Zaun: This is a 72-hour ultrasound before any abortion is performed.

Witthoff confirmed she was the questioner and said the clip accurately reflected Zaun's words. She added that "he never clarified" during the forum whether his bill would apply to women who had miscarriages, and she was "frankly astonished that he wasn't prepared to answer" that question. From her perspective, "he had a perfect opportunity" to explain his intention.

After seeing the clip, I wondered whether Zaun was simply caught off guard at the Grimes event. So I emailed the senator some questions about Senate File 2215 and whether he meant for the 72-hour waiting period to apply to women who need a D&C after a spontaneous abortion. He didn't respond to my repeated efforts to seek clarification.

Zaun's bill did not make it out of the Senate Judiciary Committee before the Iowa legislature's first "funnel" deadline, but its provisions could be added to another bill later in the session.

Other sections of Senate File 2215 spell out new requirements for medical personnel conducting mandatory ultrasounds before abortions. A law Republicans enacted in 2017 requires anyone seeking an abortion in Iowa to have the “opportunity” to view an ultrasound picture of the fetus. Zaun's bill would require medical personnel to "provide a simultaneous explanation of what the ultrasound is depicting," "display the ultrasound images," and make the fetal heartbeat audible unless the pregnant woman specifically declines to view the images or listen to the heartbeat.

UPDATE: The Iowa Senate Democrats made the full video from this forum available, so I was able to pull a longer clip of Witthoff's questions and Zaun's response.

Witthoff: I had a question for Senator Zaun. I wondered if you would briefly describe your intent behind Senate File 2215, that would require intervaginal ultrasounds for women seeking to terminate their pregnancies, and second, if your intent is for it to cover spontaneous abortions, miscarriages.

Zaun: This--okay, I see that there is something going around the internet talking about intervaginal ultrasounds. That's not my intent. My intent was an ultrasound before you have an abortion. [Editor's note: that is already part of standard practice at any clinic where abortions are performed.] A physician would--or whoever the appropriate person is--would give an ultrasound so you could see the life that's inside you. And so that's what my intention was.

Witthoff: Okay, but it would require an intervaginal ultrasound if it was very early in the pregnancy.

Zaun: That is not my intention. And there was a drafting error in the bill.

Witthoff: Yeah, I read it.

Zaun: I'm saying it was a drafting error in the bill.

Witthoff: Oh, in the bill. Okay.

Zaun: That was not my intention.

Witthoff: Does it--would it in any way cover a woman having a spontaneous abortion?

Zaun: This is, this would cover a 72-hour notice--

Zaun: This would cover, this is an ultrasound that would cover any procedure 72 hours before an abortion.

Witthoff: So a woman having a miscarriage that needs to have a D&C would have to have an ultrasound, intervaginal or otherwise, depending on how far along she was in her pregnancy, and wait 72 hours before she could have this medical procedure.

Zaun: This is a 72-hour ultrasound before any abortion is performed.

Appendix: Video from the February 18 subcommittee hearing on Senate File 2215. The two Republicans on the panel advanced the bill to the full Judiciary Committee, which at this writing has taken no further action.

Democratic Senator Janet Petersen: What type of abortion does this legislation cover?

Republican Senator Zach Whiting: I think what it does is, I think it would probably cover all types of abortion. There are exceptions in there, where if it's medically necessary, if it's a medically necessary procedure to save the life of the mother, that the requirements of the bill the wouldn't apply.

Petersen: Okay. So would spontaneous abortions be covered in this legislation?

Whiting: And by that term, are you--such like a miscarriage?

Whitings: I cannot--I cannot answer that right now. But I can dig into it and work with the drafters and stuff--

Petersen: I mean, that's a pretty significant question if you're unable to answer whether miscarriages are covered under this. One in four women will experience a miscarriage in their life. So we need some clarification on that.

Petersen: But you don't know the answer.

Whiting: I don't know the answer. I would, I would say, my best-informed reading of it would say no, a miscarriage would not be captured under the requirements of the bill.

Petersen: Okay. Now if a woman is experiencing a spontaneous abortion, how would an ultrasound be done if the woman needs a medical procedure?

Whiting: So, there's a provision in here, it's kind of the point I alluded to before. If, if it is medically necessary to perform, that the requirements of the bill don't apply. So if in the judgment of the doctor it was medically necessary to save the woman's life, or prevent possible detrimental physical effects to the body, then I would say probably the requirements of the ultrasound would not apply.

Petersen: Well, it says only to--under the way the bill is written, it says to preserve the life of a pregnant woman whose life is endangered. And oftentimes, when a woman is experiencing a miscarriage, her actual life is not in danger. So that would not cover her, the way you have medical emergency covered.

How many spontaneous abortions occurred last year in Iowa?

Whiting: I don't know. We can research that and help find the answer for you.

Petersen: Okay. Well, it's in the thousands, and I'm just curious. It's in the thousands alone, just for the Medicaid population. So my question to you is how many additional ultrasounds will we be giving to women in our state under this legislation? [...]

Well, you have a 72-hour waiting period in the legislation. You can't confirm that this doesn't apply to women who are going through a miscarriage. And for them to have to fill out a permission slip and wait 72 hours before that they can get medical assistance is simply inhumane.