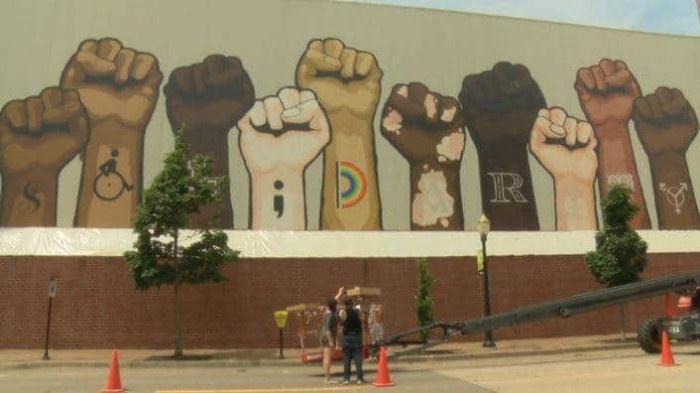 The Progressive Caucus: In solidarity we rise

As a leftist, finding a place to have your voice heard within the Democratic establishment has sometimes been challenging. The Iowa Democratic Party's Progressive Caucus was created out of that need in 2016, and it has become my home in the party.

I have been involved and active in the caucus since its inception, and was recently honored to be elected to chair the group for the 2020-2022 term. I can say with little embellishment that my decision to run for Progressive Caucus chair was not taken lightly.

I wondered if I could be the leader the caucus deserves. I also questioned if there were already enough voices from 40+ cis straight white men, and if my run would potentially disenfranchise other talented leaders from stepping up. However, after some serious thought and some encouragement from good friends, I threw my hat in the ring.

It wasn’t long after I decided to run that a good friend and a fiery progressive, Tracy Murphy, decided she would run for vice chair. After a brief discussion we agreed to announce ourselves as a combined ticket. In the days leading up to the election, we talked about where we wanted to go with the caucus: our visions, our goals. We enthusiastically shared our ideas with the constituency, hoping that they would share our vision. Immediately after winning the election on July 11th, we got down to business bringing those ideas to fruition.

The Progressive Caucus has spent four years coming into its own. As a fledgling caucus, there was a lot of building, feeling around, and trying things out to be done, and it is thanks to the work of the previous leaders and members that we feel it is time to take the caucus to the next level and focus on growing our membership, our influence, and our role in the Iowa Democratic Party.

In order to have an effective statewide caucus, we knew we needed some form and structure. We plan to create multiple roles within the caucus to cover everything from the day to day, like secretary positions, to outreach. There will be an established set of rules on how meetings and votes on caucus business are conducted, responsibilities of leadership, and how rules are adopted and amended.

We will hold, at the very least, regular monthly meetings and do what we can to ensure our membership has access to the information they need. In order to improve accessibility and participation to those who work multiple jobs or second or third shift, we are investigating the possibility of holding multiple meetings on the same agenda in both the evening and morning.

Defining Where We Stand

One of the first challenges that needed to be addressed was the confusion surrounding the term “progressive." The broadness and co-opting of the term has led to some misconceptions of what defines our caucus as a specific subset of Democrats, and has muddied efforts to generate movement towards our larger goals.

In the past the Progressive Caucus had developed its own platform. However, we want to be able to point to a simple, quick document and show exactly where our lines in the sand are. To address this issue, we intend to commission a temporary subcommittee that will draft a Joint Statement of Values and Principles.

In line with our goal to make the caucus more intersectional, nine seats on this committee will be reserved for one member each from members that are represented by other identity caucuses. Black, Latino, Asian American and Pacific Islander, Native American, Women's, Stonewall, Disability, Rural, and Armed Forces/Veterans. The remaining three seats will be at-large, but if we don’t yet have a transgender voice on the committee, a trans person would receive preference for one of those three remaining seats. The Progressive Caucus is made up of voices from all walks of life and all identities. We need to make sure that they all have a voice in what the Caucus should work for.

While the Progressive Caucus has always striven to create a welcoming environment for everyone, we still remain largely white, largely straight, and lacking the real foundational diversity that would strengthen us. Part of the disadvantage of being an ideological caucus is that we have membership that might feel more represented in other identity caucuses. We certainly do not believe people should abandon those identity caucuses that best represent them to be lost in the mix in the Progressive Caucus.

We feel it is our duty to bring the Progressive Caucus to them. One of our primary organizational goals is to reach out and amplify the Iowa Democratic Party's constituency caucuses and help them attain their own progressive goals. We want to strongly encourage those who are affiliated with identity caucuses to participate in Progressive Caucus activities and discussions and share how we can help advance their goals. In this way we hope to provide a place for allyship without inserting ourselves into their spaces and diminishing the voices of groups advocating for themselves.

Some of the most progressive people in our state come from rural and deep red counties in Iowa. The inaugural chair of the Progressive Caucus came from Red Oak (Senator Joni Ernst's home town in Montgomery County). Two amazing progressive organizers we know live near Clarinda (Page County) and Riceville (Howard County). Sioux County and surrounding areas have some incredibly staunch and active progressives.

We are missing out on so much talent and passion by focusing on Polk, Dallas, Linn and Johnson counties, and we seek to remedy that. Within the first month of our term, the caucus will begin actively seeking out at least one progressive representative for each of the 99 counties. That’s no small task, but it is one that should be taken. From there we hope to organize our rural outreach in such a way that we can grow the influence of progressives and the Democratic Party and start activating other potential progressives who may feel like they are alone in a sea of red.

Establish a relationship with activist organizations

The Progressive Caucus is made up of people who have worked as street medics, marched in protests, and have thrown their bodies and souls against the machine. Many of them work with non-partisan activist organizations such as Black Lives Matter, the League of United Latin American Citizens, Iowa Citizens for Community Improvement, Action Iowa, the Sunrise Movement, and others to fight for many of the goals and issues that progressives and the Democratic Party as a whole fight for.

We believe that if there is any way the Democratic Party is going to build real momentum in the future we must embrace these largely nonpartisan activist leaders and organizers and develop a solid working relationship with them.

We plan to start addressing these bold ideas at our first meeting on Wednesday, July 29 at 7:00 pm, which will take place through Zoom. Anyone who wishes to join this meeting can sign up here.

In the words of the late, great, Senator Paul Wellstone, “We all do better when we all do better." That will be my guiding principle as my term as chair. Solidarity will be key to getting this work done. We cannot do this alone. It will take every single one of us to truly fight for the change we need in these uncertain times.

But if we all lift together, and act in solidarity with each other for the life and dignity of all people, if we are willing to fight for someone we don’t know as much as we are willing to fight for ourselves then we will truly be able to reclaim this state from forces that seek to harm, corrupt, and destroy. Then we can create the big structural change we need to truly build a future we can all believe in.

Editor's note from Laura Belin: The Iowa Democratic Party's Progressive Caucus has a page and a discussion group on Facebook.

Bleeding Heartland has invited all of the newly-elected leaders of Iowa Democratic Party constituency caucuses to write guest commentaries about their plans. A list can be found at the end of this post.