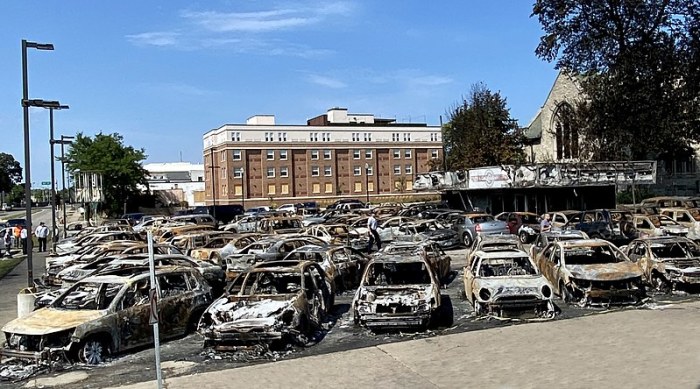 Ira Lacher: We need Joe Biden to speak before Donald J. Trump succeeds in making "law and order" the number 1 issue of the 2020 election. -promoted by Laura Belin

If there ever were a need for a Sister Souljah moment, it's now.

In 1992, Bill Clinton, locked in a  tight race with President George H. W. Bush, blasted the rapper known as Sister Souljah for urging blacks to kill whites in retaliation for the death of Rodney King at the hands of Los Angeles police, who were acquitted of any crime. Speaking to the Reverend Jesse Jackson's Rainbow Coalition, the Democratic nominee from Arkansas repudiated her comments as incendiary.

"If you took the words 'white' and 'black,' and you reversed them, you might think David Duke was giving that speech," Clinton told the group, referring to the then-leader of the Ku Klux Klan.

Clinton's remarks provoked a derecho from much of the Democratic Party. But it also solidified his standing among white suburban independents. Those voters were key to Clinton ousting Bush that fall, as they have been in every presidential election since 1968.

We need such a moment from Joe Biden now.

We need it before Donald J. Trump succeeds in making "law and order" the number 1 issue of the 2020 election instead of what it should be: his homicidal bungling of the COVID-19 epidemic. Like Richard Nixon, Ronald Reagan, and Bush, Trump and his running dogs are doing everything they can to frighten white suburbanites with phantasmagoric intimations of black hordes descending on their peaceful, tree-shaded enclaves.

Indeed, footage of cities being set on fire could be seen on every network following the police shooting in the back of Jacob Blake in Kenosha, Wisconsin, on Sunday, August 23.

A few days ago, Biden told MSNBC's Andrea Mitchell that he believed Trump was welcoming the violence, which many Black leaders have denounced.

But that's not enough. To quash this too-successful Republican strategy, three things must happen.

One: Biden needs to criticize the justifiably angry and outraged masses the way Clinton responded to Sister Souljah. And he needs to do it firmly and publicly.

Two: Progressives who are bound to caterwaul that Biden is insufficiently liberal must keep their mouths shut. The Democratic Party needs to show strength in unity, not discord.

Three: People who are intent on burning and looting need to stay home.

Let's be clear: I share the outrage at the latest example of centuries-long systematized degradation against Black people. And I understand why many people express that rage with violence.

But as that violence plays endlessly on Fox News, America's most-watched TV channel, it will almost certainly instill reasonable doubt in many voters we absolutely need to restore battleground states to the sanity column.

But don't listen to me -- I'm a clueless white guy.

“While we sympathize with the feeling of anger amongst many Americans, we are deeply saddened and disappointed that a small group of protesters have stayed on site and begun to damage property and antagonize our police force who gracefully supported our cause without disturbance."

Or Sondra Young, president of the Denver NAACP. "Stop the looting downtown after hours," she told that city's  Channel 4 this past week after violent protests in that city against the Jacob Blake shooting. “This is a two-fold thing we’re looking at here. We want people to be safe, we don’t want to dilute the message of the Black Lives Matter movement."

Or Letetra Widman, Jacob Blake's sister. "Black America, I hold you accountable. You must stand. You must fight, but not with violence and chaos," she told thousands who flocked to Washington, D.C., on Friday.

Or Jackie Robinson. Who was told by Brooklyn Dodgers general manager Branch Rickey precisely what was to come his way when he became the first black player to break major-league baseball's color barrier. Robinson recalled the conversation in his 1972 autobiography, I Never Had It Made:

"They'll taunt and goad you," Mr. Rickey said. "They'll do anything to make your react. They'll try to provoke a race riot in the ball park. This is the way to prove to the public that a Negro should not be allowed in the major league."

"Mr. Rickey," I asked, "are you looking for a Negro who is afraid to fight back?

I never will forget the way he exploded.

"Robinson," he said, "I'm looking for a ballplayer with guts enough not to fight back."

This is where we find ourselves now. Trump and his enablers are hoping -- praying -- for further violence. "He’s rooting for more violence, not less,” Biden told MSNBC's Mitchell.

But like Jackie Robinson, we need to have the guts not to fight back. And if we do, we need Joe Biden to tell us: