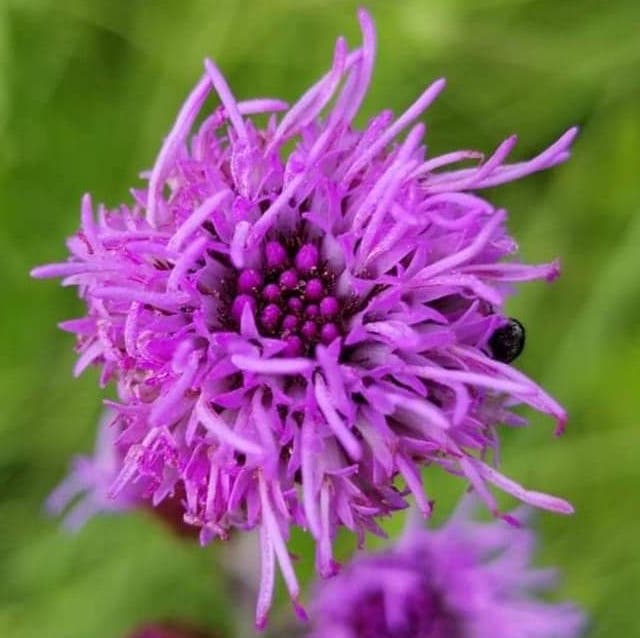 As other wildflowers are beginning to fade, Rough blazing star (Liatris aspera) is just getting started. Also called tall blazing star, this unbranched, upright plant grows to be between 2 and 5 feet tall, according to Illinois Wildflowers.

Rough blazing star blossoms in a spike-like arrangement of pink to purple flowerheads up and down the stem. This spike adds wonderful electric rosy purple color to the natural scenescape.

Rough blazing star flowers start blooming at the upper tip of the plant in July. This first photo shows a monarch butterfly getting nutrients from a rough blazing star just starting to bloom. 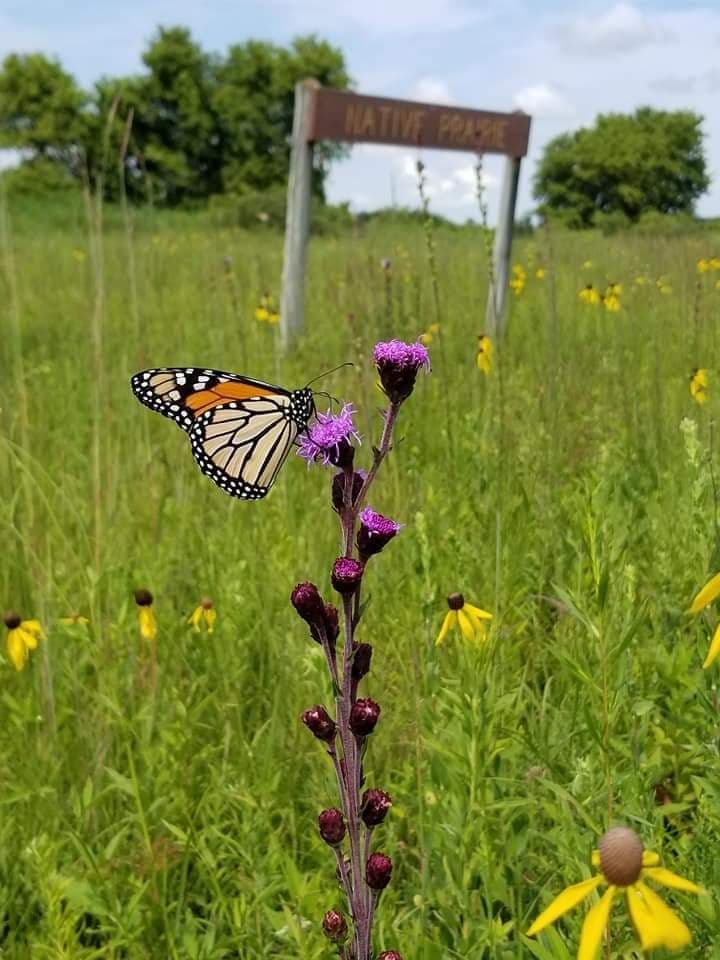 By September, most plants have spent flowerheads at the top of the stem, while the last flowers near the bottom continue to offer nectar to traveling butterflies. These photos show flowers blooming in the middle of the plant. The top flowerheads are no longer feathery, and the bottom buds haven't opened yet.

Another name for this plant is Gayfeather, due to the flowerhead's feathery appearance.

Each of these disk flowers has a long divided stingy, curly, style giving it the feathery ball look. Note: I have yet to find a plant with 150 flower heads - maybe 50.

Many composite flowers like sunflowers have the disk flowers and ray flowers (what some of us call petals). It is difficult to see these five lobes of the star shaped flowers without zooming in on a picture.  It is fun, as you can see in the next few shots, to see close up the details of the little star flowers with the divided styles. 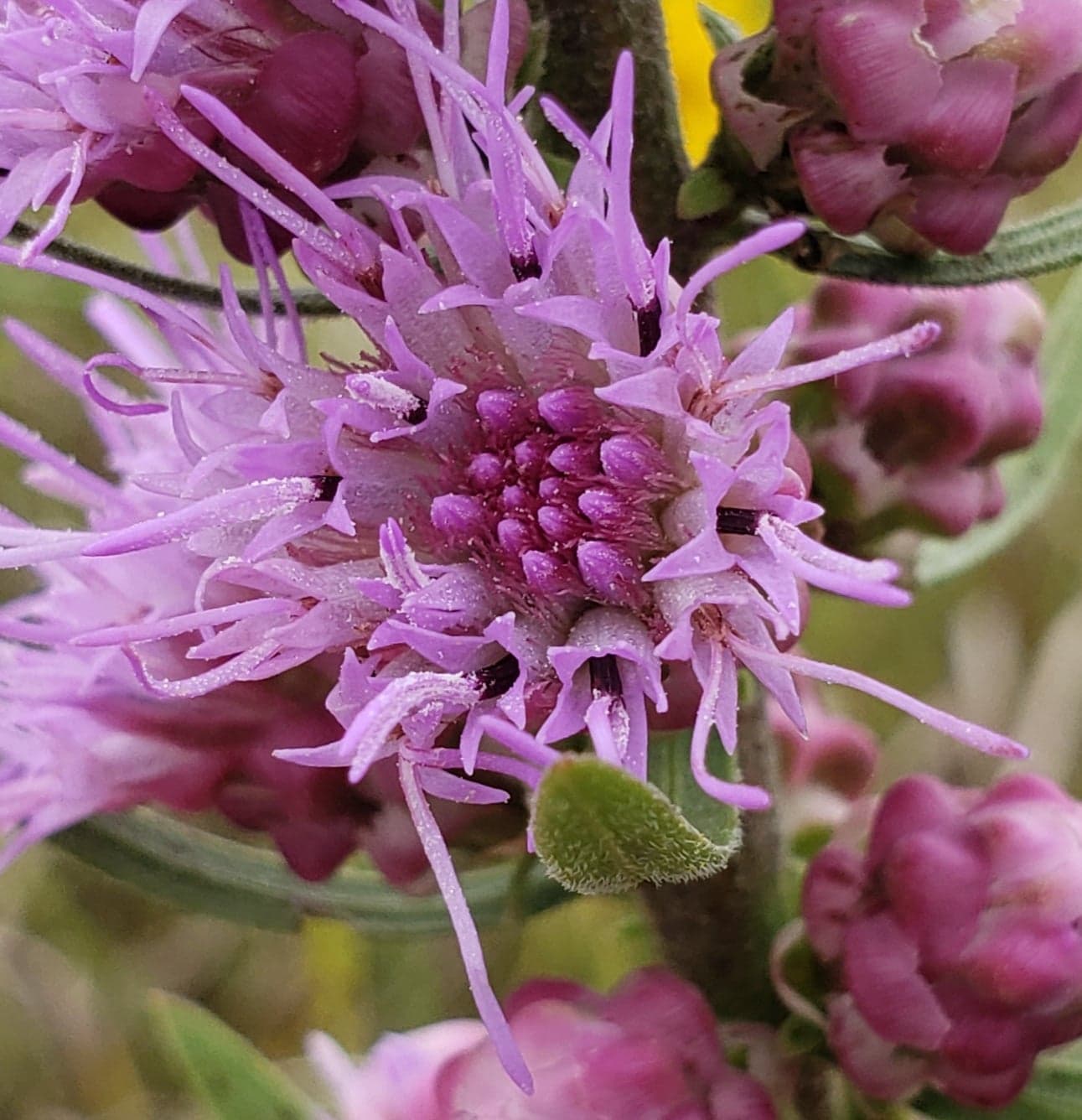 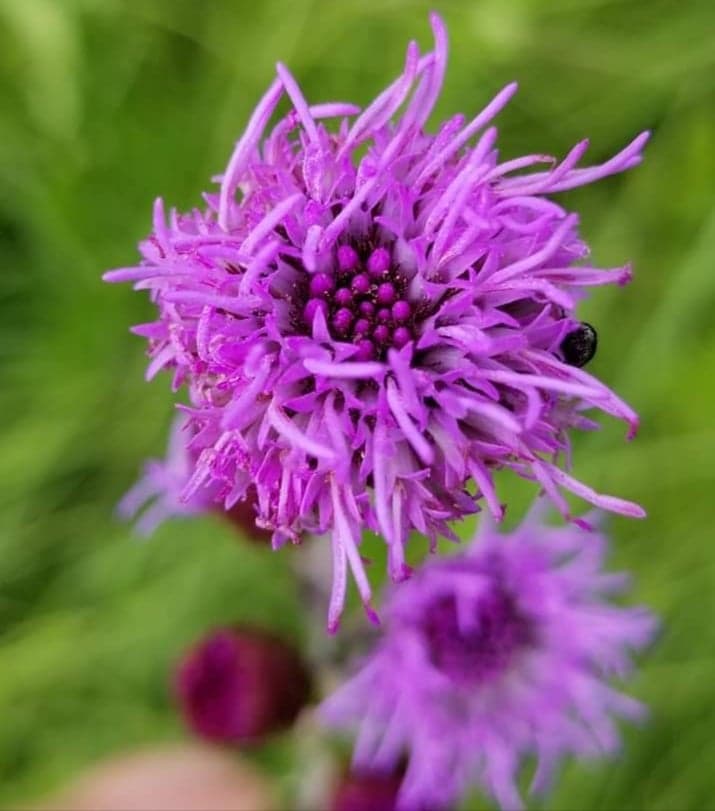 I will continue to use different common names to describe this plant. Button blazing star describes the button-like appearance of the bud before it blooms, as well as the flowerhead when it is blooming, since it can look like a button throughout the season, even after the flower is spent.

The word rough comes from the texture of both the stem and the leaves. The green or red stem is covered with short stiff hairs. These hairs give it a rough feeling.

The Minnesota Wildflowers website describes the leaves as having a rough texture like the stem from similar short stiff hairs. The lower leaves can get up to 12 inches long but usually have withered away by the time the plant blooms.

The leaves get much smaller as they ascend the stem. Averaging about 3 inches long, the alternate attached leaves become so crowded on the stem that they start to appear whorled.

Rough blazing star tolerates poor dry, rocky soil. I particularly find its root system or corm interesting. Like a bulb, it holds nutrients for the plant but it will also swell with water to save for drier times. This water saving capability makes this blazing star a great drought resistant plant.

What ever name you call it--rough or tall blazing star, rough or button gayfeather, or even prairie star--these feathery, purple starry button flowers add a brilliant splash of color to the late summer prairie, especially if there is a butterfly sitting on top of it. 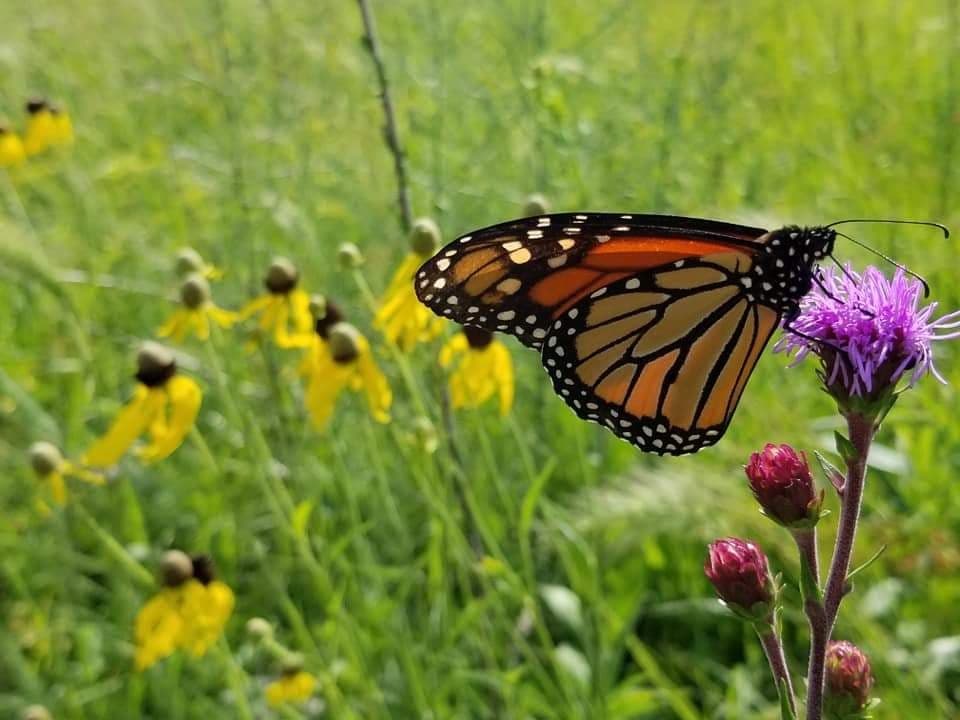 With the author's "Prairie Dog":