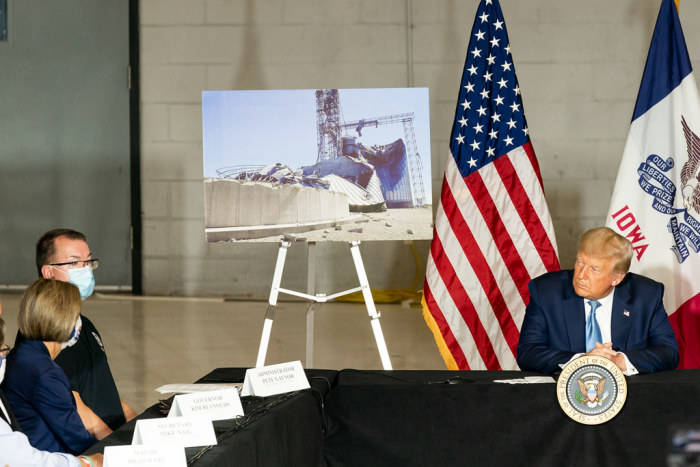 Dan Piller: The real problem for Trump in Iowa is that the big farm choir he thinks he is addressing has been reduced to something more like an ensemble. -promoted by Laura Belin

President Trump’s rally at the Des Moines International Airport on October 14 will no doubt be billed by the media, and probably Trump himself, as his bid to solidify the farmer support that was so crucial in his 2016 Iowa victory over Hillary Clinton.

Trump has put his (or more properly, the taxpayers’) money where his mouth is, bestowing more than $2 billion in direct aid to Iowa farmers this year alone, along with more than $1 billion the previous two years to soften the damage caused by Trump’s trade wars with China, Mexico, and Europe. Media reports in advance of his visit put the total package nationally to farmers this year at an eye-catching $46 billion, a number that won’t charm economically hard-pressed taxpayers in America’s cities.

The real political problem for Trump in Iowa is that the big farm choir he thinks he is addressing has been reduced to something more like an ensemble.

Consider that the latest U.S. Department of Agriculture farm census puts the number of working farmers in Iowa, the kind who actually work in the tractors and combines on Iowa’s 24 million cultivated acres, at about 155,000. That number is smaller than even the 200,000-plus vote expected in Polk County alone, and is just slightly more than ten percent of the 1.6 million votes expected statewide in the November 3 election.

Nationally, farmers amount to no more than 2 percent of the total population, a far cry from the 25 percent of the U.S. population in the 1930s when Franklin D. Roosevelt’s administration was faced with the most serious agricultural crisis in U.S. history and responded with the patchwork of subsidies that exist to this day.

The steady, bipartisan flow of money hasn’t stopped the steady reduction in the number of working farmers. The Great Depression and the Farm Crisis of the 1980s, as well as 600 horsepower tractors, 24-row planters and 16-row cultivators, hybrid and genetically modified seeds have combined to make the little 250-acre family farm a relic of the pre-World War II past. Farm families who have cashed in on the boom in land prices, which have held up surprisingly well in the last half-decade despite low corn and soybean prices, have seen their land sold at auction to neighboring farmers, who consolidate the new acreage with their existing operations.

The effect of this consolidation can be seen in Iowa’s small towns, where all too often the school, grocery store and even the venerable main street café have closed, victims of declining population base. Those farmers who remain on the land now average close to 70 year in age, putting them in what is referring to delicately as a “declining demographic base,” that becomes easier to write off with each election cycle.

This is not to say that agriculture is no longer influential in Iowa. Deere & Co. is still the state’s largest employer, and Iowa’s cities and small towns are dotted with cooperatives, processing and ethanol plants, commodity traders, and farm insurance concerns. Ethanol remains a sacred cow and the Iowa Farm Bureau and the various corn, soybean, pork, and cattle interests still have big muscles to flex in state politics.

And Trump can still ring political bells in rural Iowa with his support for gun rights and his alignment with conservative Christians who are most numerous outside urban areas.

But savvy politicians realize that with every election cycle, farmers are an older and more diminished cohort as an increasing number of urban Iowans focus their concerns about agriculture more on clean water and air and animal welfare rather than the traditional commodity price and export issues. Democrats from Joe Biden on down can give agriculture little more than traditional lip service about antitrust enforcement against big processors.

The Democrats’ real target is a Polk County resident who gained a new perspective on agriculture when the Des Moines Waterworks sued four northwest Iowa counties accusing them of dumping nitrates in water that had to be treated, at Des Moines ratepayer expense, of nitrate contaminants. Democrats now are willing to risk waving the red flag of the Green New Deal in farmers’ faces in hopes that the more numerous residents of Iowa’s urban centers will be just as environmentally sensitive as urban dwellers in the Eastern and Pacific time zones.

Recent polls and the need for Trump to make his visit to Des Moines Wednesday, less than two weeks removed from his COVID-19 hospital stay, speaks volumes about the likely success of the Democrats’ new strategy. Trump, who won Iowa by more than nine percentage points in 2016, is no better than tied with Biden in most recent polls. More alarming to Republicans, Trump is still running ahead of Republican incumbent U.S. Senator Joni Ernst, whose seat now is considered low-hanging fruit to be plucked by the Democrats next month.

The longer term consequences of this shift in political thinking could be drastic for farmers next year, should Biden win the White House and the Democrats take control of both houses of Congress.

Trump’s subsidies were issued by executive order from USDA funds, bypassing Congress, and they now amount to 30 percent or more of farm income at a time when corn and soybean prices are barely 60 percent of their averages a decade ago. Back in those halcyon days before the 2013 collapse in corn and soybean prices, farmers could confidently tell Congress they no longer needed the so-called “direct payments,” and agricultural subsidies were scaled back to helping farmers pay for their crop and commodity price insurance.

The low prices since 2013, and Trump’s eagerness to revive direct payments to win and keep farmer support while he jeopardized their export markets with his tariff wars, could put agriculture in a politically precarious position when farmers ask the government for continued help next year. Democrats are unlikely to forget the 70 percent-plus margins Trump won in rural counties in the Midwest and South in 2016 and will probably win again this year. But if Biden can eke out a victory in Iowa, the farmer vote even in this prototypical agriculture state will be revealed as irrelevant.

President Biden, when confronted by a request from his old Senate colleague Chuck Grassley for another round of aid to farmers, is likely to parry the Iowa senator by sending the issue over to Congress. There, environmental activists led by New York representative Alexandria Oscasio-Cortez and Senator Elizabeth Warren (who already has introduced a bill banning factory hog farming) will be only too happy to hold hearings to re-examine the entire farm subsidy structure and impose a laundry list of environmental rules on farmers in return for more largesse from the federal treasury.

Should that happen, Iowa’s farmers will regard fondly the good old days when Donald Trump, the master of Fifth Avenue and Mar-a-Lago, bestowed billions on them with no questions asked. And ex-President Trump, while dodging subpoenas from various prosecutors, will wonder why all that money he threw at farmers didn’t pay off in Iowa in the 2020 election.