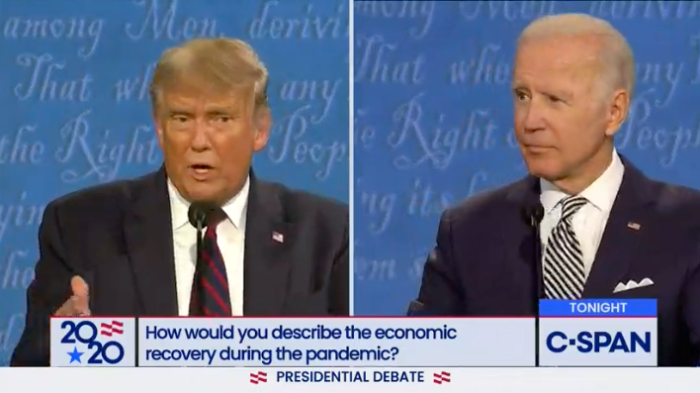 Dan Guild: Contrary to the usual dynamic of a debate between an incumbent and challenger, Donald Trump now looks like the risky alternative. -promoted by Laura Belin

To candidates who are behind, debates are "the thing with feathers."

They offer one last chance to change the trajectory of a race. Historically they have mattered on occasion. In an unusual year, how they might matter is very, very, strange.

Usually, the last debate between incumbents and challengers share a similar dynamic. Typically, by this point in an election, the public knows what it thinks of the incumbent. The challenger's objective is to be seen as a credible and safe alternative to the incumbent.

The incumbent's objective is to defend their record and paint the challenger as a dangerous alternative. This dynamic has been repeated over and over again - perhaps most memorably in the 1980 debate between Jimmy Carter and Ronald Reagan.

But curiously, I think the opposite is true for this debate. It is Donald Trump who looks like a risky candidate. A common reaction shared by some on the right was that Trump's behavior made him look unhinged.

One thing one sees in poll after poll is concern about how divided Americans are. When it appears in the list of issues (not often) it is usually selected as the most important. Joe Biden's advantage on this issue is apparent in the table.

Incredibly, Trump has an advantage on the economy. Yet that is seldom front and center in his messaging. Instinctively he attacks, and he does so on the culture war - and in so doing helps make Biden's case.

There is, in this data, a way to make a positive case on the economy. And it should not be difficult really to simply comply with the debate rules. In most of the recent elections, debate bounces have not lasted. In 2012, 2004, and 2000 polling after the last debate was less accurate than polling taken in the middle of September. There is some reason to believe that this race will close, though it is very unlikely Trump can win.

But that is dependent on a president capable of understanding what is in his own best interest, which is not where Trump excels.

Top photo: Screenshot from the first televised debate between Donald Trump and Joe Biden on September 29.