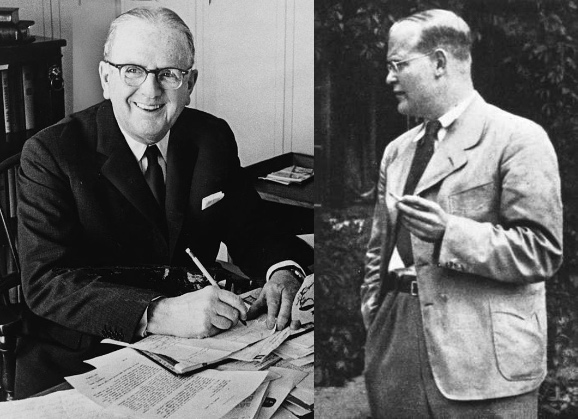 Herb Strentz reflects on two Christian spiritual leaders of the 20th century. One is viewed as an influence on Donald Trump. -promoted by Laura Belin

“Just when I thought I was out, they pull me back in.”

That’s a line from the 1990 movie The Godfather Part 3. It is a curse and a statement of fact by the Mafia don, Michael Corleone, played by Al Pacino.

Well, thanks to the election, I thought I was out— “out” from the nonsense about Donald Trump being a gift from God, a 21st century version of the 6th century B.C. Cyrus the Great, King of Persia, anointed by Jehovah to rescue Jews from Babylon.  You’ll find Cyrus chosen by God in the 45th chapter of the biblical book of Isaiah. That makes it crystal clear: God chose Donald the Great as our 45th president!

Well, a comment from Trump’s former press secretary Sarah Huckabee Sanders could be simpler: “I think (God) wanted Donald Trump to become president and that’s why he’s there.”

So in post-election euphoria, what might pull one back into confronting the Trump-is-God’s-anointed mentality?

It was an “Iowa View” essay in the Des Moines Register. Author Todd Blodgett suggested one reason Trump was not conceding the election might be because of his spiritual guidance and encouragement from the late Rev. Norman Vincent Peale (1898-1993) to never envision defeat. Peale was famed for his 1952 book The Power of Positive Thinking  and not scolded much for bigotry against Catholics, Jews, and Blacks.

One instance of such bigotry — not “positive thinking” — occurred in 1941 and haunted Peale for decades afterward.

Robert Shaw, who was to gain international renown as a chorale conductor, as an early effort, had a volunteer community chorus of 200. Shaw characterized them as including “every shade, shape and color of human flesh and… every species of human ideology, philosophy, occupation, and religious custom.” They rehearsed in Peale’s church, Marble Collegiate Church, a Dutch Reformed congregation in Manhattan.

The church’s leaders, however, were upset by the rambunctious nature of the chorus. Peale told Shaw: the Negros, Catholics, and Jews in the chorus were not welcomed and at least 50 percent of the chorus had to be church members. Shaw and the chorus went elsewhere.

In 1986, Shaw received a handwritten apology. Peale admitted to an “insensitive and stupid mistake in connection with the fine organization you were developing… I have ever been sorry about my lack of cooperation.”

The Trump family were members of the church where Peale presided from 1932 to 1984, so Donald learned about God and thinking positively about himself.

Trump praised Peale, and Peale observed in 1977 that Trump had “a profound streak of honesty and humility.”

Trump was a youngster age 6 (and then 10) when Peale opposed Adlai Stevenson, the Democratic Party’s candidate for President in 1952 and 1956, for being divorced and therefore unfit for public office. Peale was a leader of Protestant opposition to Democratic candidate John F. Kennedy in 1960, fearing a Catholic president would mean Pope John XXIII would abolish our First Amendment rights.

In a recent letter to the Des Moines Register editor, retired clergyman Cleveland Eugene Bryant took the Peale influence upon Trump and our nation’s religious life a step beyond the power of positive thinking.

Peale’s teachings led to modern expressions of “me-first” religion, such as Joel Osteen’s prosperity gospel. One reason modern evangelicals flocked to Trump, and continue to support him, is their own desire to be winners. Todd Blodgett’s essay, therefore, is correct as far as he goes. However, the Peale-ism that helped shaped Trump is probably a permanent feature of American religious life. By extension, Trumpism won’t be gone any time soon.

Discussions about religion and politics and the role of clergy in a nation’s political life often lead to consideration of the life and death of German theologian Dietrich Bonhoeffer (1906-1945), and his opposition to the Nazis and Adolf Hitler.

It’s worth taking a look at Bonhoeffer because he was in the U.S. and New York City for a brief time when Peale was in his ministry at Marble Collegiate Church.

Bonhoeffer visited New York City twice during the 1930s, once on a fellowship to study at Union Theological Seminary and then for a short time in the summer of 1939. That year, his friends at Union, fearing for his safety in Germany, encouraged him to come to the U.S. He was to administer a program for refugees from Nazi Germany, but he stayed for only a month. He felt if he were to have any role in post-Hitler Germany he had to be there now. Around the same time, Peale was associated with the “America First” movement opposing U.S. entry into World War II.

Upon Bonhoeffer’s return to Germany, family connections led to undercover work in an anti-Hitler cell in the Abwehr, German military intelligence.

There he helped Jews escape from Germany, using religious connections in Switzerland and England. His efforts were driven by his abhorrence of the anti-Semitism of the Third Reich. A frequently cited quote of his is “Only those who cry out for the Jews may sing Gregorian chant.” By that he meant believers should not retreat into liturgy and rituals to avoid dealing with issues in the world.

When the anti-Hitler cell was uncovered, Bonhoeffer was arrested in April 1943 and spent his remaining years in prison, until being executed on April 9, 1945. His brother Klaus and two brothers-in-law, Hans von Dohnanyi and Rudiger Schleicher, also were executed that April for their plots against Hitler.

In some respects, it should not be all that bad to be pulled back in.

Top image: Norman Vincent Peale on the left, from a 1996 photograph by Roger Higgins in the Library of Congress collection. Dietrich Bonhoeffer on the right, in a 1939 photo now part of the German Federal Archives.